Five things you need to know about Pap, HPV, and pelvic tests

Share All sharing options for: Five things you need to know about Pap, HPV, and pelvic tests

For most women, the annual pelvic exam and Pap test have been uncomfortable, yearly rituals. There's good news: Despite what your doctor may be doing, women have options. Here's what you need to know:

1) If you're healthy, you don't need a pelvic exam every year

A pelvic exam, to put it mildly, is not a pleasant experience. You know, when you lay down on a cold examination table in a paper dress, your knees bent and heels in stirrups, and your doctor feels around inside of you, pressing down on your abdomen for extra discomfort.

Now, the American College of Physicians has given women a pass card: This month, they published a review of all the literature on pelvic exams from 1946 to 2014, and set out new guidelines recommending against the test in asymptomatic patients who are not pregnant. As the accompanying editorial put it, "The pelvic examination has held a prominent place in women's health for many decades and has become more of a ritual than an evidence-based practice." Fear, pain, discomfort and surgery, they found, are potential harms from the pelvic exam—and yet they could not find any clear benefit in all the studies they reviewed.

You'll probably read that the American College of Obstetricians and Gynecologists disagrees with the new recommendations. They believe that an absence of evidence regarding benefits is not enough justification for discontinuing the practice, in spite of the harms. They are also the specialists who stand to lose the most if women stop booking annual doctor's appointments seeking out the exam. And they are the same group that previously acknowledged, "No evidence supports or refutes the annual pelvic examination or speculum and bi-manual examination for the asymptomatic, low-risk patient."

To add to the confusion around how to care for your lady bits, another new study seemed to suggest Pap tests might be useless: Researchers at the US National Cancer Institute looked at data from more than one million women and found that the human papillomavirus (or HPV) test outperformed the Pap test when it came to identifying cervical cancer. Some of the  articles on the study seemed to suggest the Pap is an outdated practice that can be skipped. But unlike the literature review on pelvic exams, this study won't change practice just yet.

Here's why: Cervical cancer is the third most common cancer in the world, it's mostly caused by HPV, and we have two tests that work best together to detect HPV and the abnormalities in the uterus that are likely to turn into cancer.

The Pap is the first such test. It was invented in the US in 1941 by none other than George Papanicolaou. (Weird fact: He actually established the technique by examining vaginal debris from guinea pigs and then translated that knowledge to humans.) At the time, it was a game changer and model for cancer screening: it was the first effort to detect early cancer and it literally turned cervical cancer into a largely curable disease. 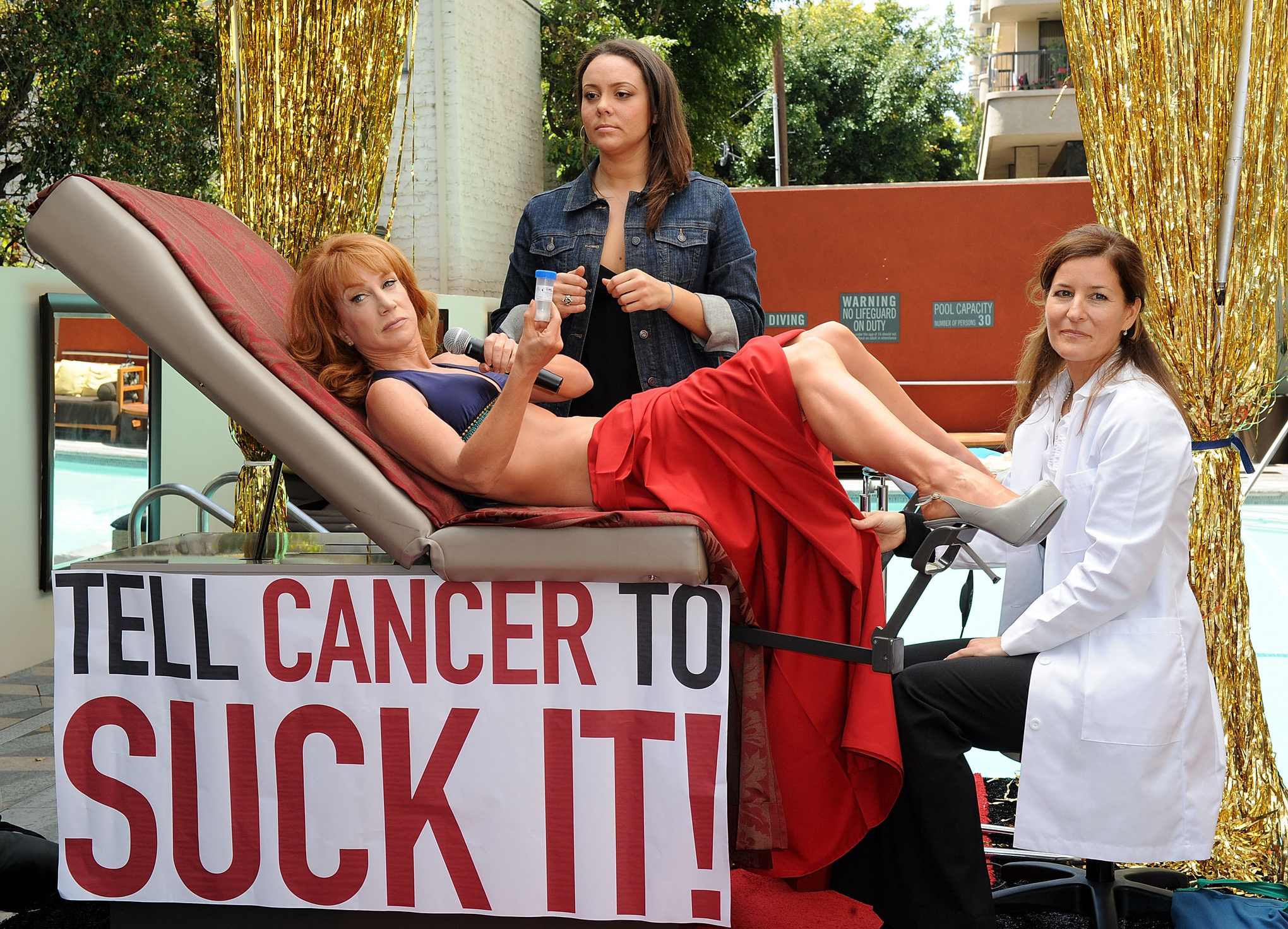 The test itself involves scraping the walls of the cervix and vagina for cells, which are placed on a slide and sent off to cytologists who look for abnormalities under microscopes. Though the test is not 100 percent accurate—sometimes the doctor doesn't scrape the area of the cervix where bad cells are harbored, sometimes she doesn't transfer them to the slide properly—the consensus in the medical community is that women develop cancer not because of a failure of the test, but a failure to get the test.

"At least half of the cases of cervical cancer in the US occur because women have not had appropriate screening or follow-up," says Dr. Michael LeFevre, who chairs the U.S. Preventive Services Task Force. So it's still a very valuable test, and doctors strongly recommend the test every three years for women ages 21 to 65. For those ages 30 and above, there's another option.

That's the HPV test. It's second test for cervical cancer in women and it's been on the US market since 2003, so it's much newer to women's health care than the Pap test.

The bottom line about HPV testing is this: it's more sensitive than Pap smears at catching the cancer-causing HPV, meaning it can more accurately detect the virus. But the problem is, in women under 30, there's a high risk of finding false positives. That's because HPV is not always deadly—in most women, it clears within a year or two—and this is particularly true for young women. Running this ultra sensitive test at an earlier age could mean sending patients into tests and treatments that will have no positive impact on their lives and health outcomes. For this reason, doctors say this test has a "low predictive value" for cervical cancer in women under 30. 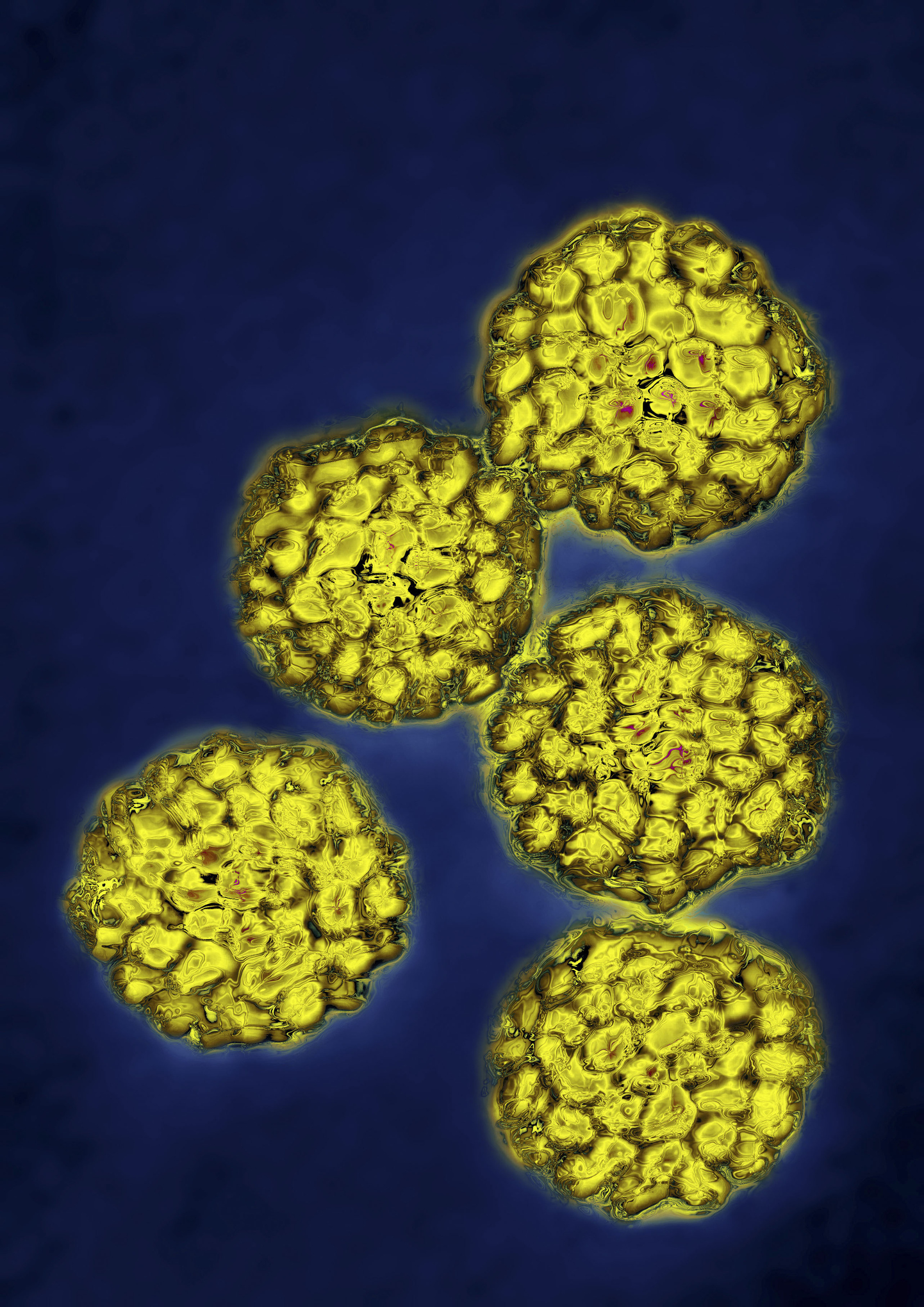 Dr. Brenda Sirovich, professor of medicine at the Geisel School of Medicine at Dartmouth, explained, "It's much more likely to catch people and label them as diseased or abnormal when in reality, they are going to be just fine."

"The HPV test is much more likely to catch people and label them as diseased or abnormal when in reality, they are going to be just fine."

4) The testing needs of women over 30 are different

In women over 30, though, the story is a little different. HPV after this age is more likely to be related to cell abnormalities that could become cancerous. Therefore, having a sensitive test is a good thing. In this case, most health groups recommend running HPV tests in addition to Pap smears every five years. Even here, HPV test won't replace the Pap test just yet: the HPV test can only determine whether the virus is present, but it doesn't tell doctors whether that infection is causing pre-cancerous changes to the cells of the cervix and vagina as the Pap test can.

For women ages 30 to 65, the medical consensus is that they can either get a pap smear every three years or both the HPV and the Pap test every 5 years. For now, this is a matter of personal choice. "For some women, it's about avoiding the pelvic exams," said Dr. LeFevre. "For others, it's about getting fewer tests done. Both approaches are equivalent in terms of preventing cervical cancer."

5) This handy chart sums it all up 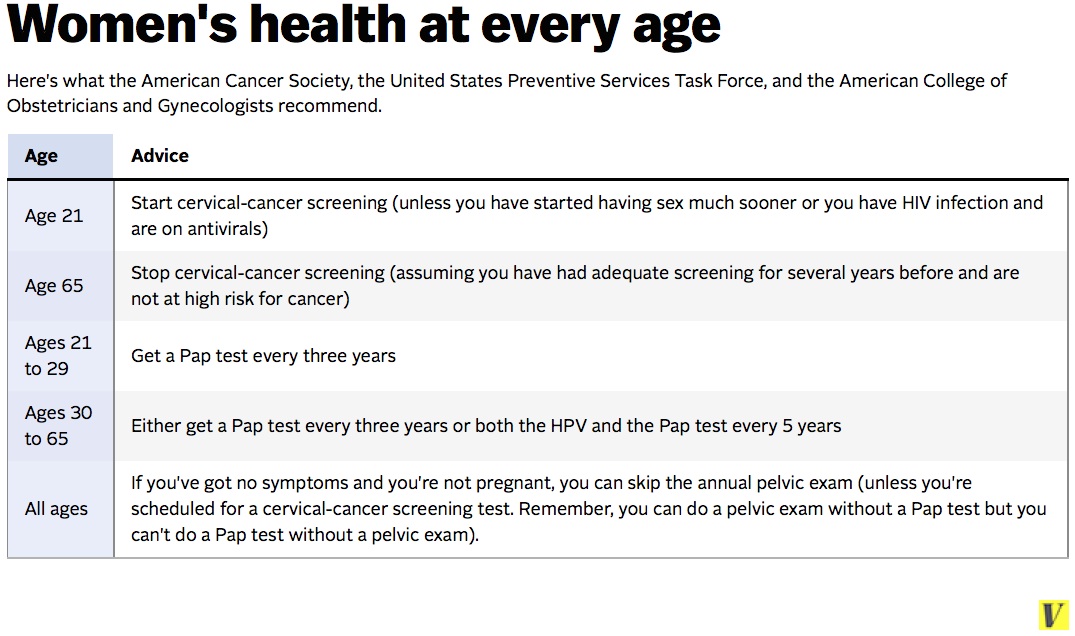 *High risk individuals-who have HIV infections, are immunosuppressed for some reason, or have a history of cervical cancer-may need to be screened more often.