Why the Israel-Palestine conversation is so polarized

Share All sharing options for: Why the Israel-Palestine conversation is so polarized

It's no secret that the discourse around Israel-Palestine inside the United States is typically a mess of screaming matches, miles-apart polarization, and total disagreement that extends even to the basic facts. There are many explanations; one of them is surely the extraordinarily narrow confines of the debate among leading American politicians. But there's also an especially pernicious kind of tribalism that pervades the Israel-Palestine debate within the US — one that turns issues of fact into tests that determine whether or not you're the right kind of person. It's about the least productive possible way to think about public policy, but, on Israel-Palestine, it's seemingly inescapable.

The Israel-Palestine issue activates the worst features of our brains

A wealth of experimental evidence demonstrates that political life makes everyone think worse. People tend to seek out information that proves their ideology to be Good and True, their enemies to be Bad and Wrong.

For instance, one famous study showed two groups of people identical write-ups of fake studies about the death penalty. People who believed the death penalty deterred crime uncritically accepted the research coming to that conclusion, but tried their best to poke holes in the study showing no deterrent effect. The reverse was true for those who didn't believe in death penalty deterrence. The point is that people weren't neutrally evaluating arguments. They're simply reasoning to the conclusion they want.

The point of the debate over isn't to get to the truth of the matter, It's to defend of your tribe's moral superiority

But it's so much worse on Israel-Palestine. There's a broad range of positions that one could have on the Israeli-Palestinian conflict. But everyone who works on the topic feels a lot of pressure to take on one of two basic tribal identities: pro-Israel or pro-Palestine. That's defined less by your position on policy than on your sympathies: whether you believe Israelis have wronged Palestinians more, or the other way around.

The pressure to pick sides is partly a result of the issue's incredibly high stakes. There's a metric ton of historical pain on both sides, and genuinely deep fear about the survival of both the Israeli and Palestinian people. The extraordinary significance of the conflict ossifies the camps: when the issue is so important and emotional, no one wants to give ground. Anything one says that helps one side's narrative is greeted warmly by its partisans, and denounced by its enemies. This creates a great deal of pressure to make one side your allies, and stick with them.

The research on partisan psychology has a good explanation of why this might be. A 2006 paper by Christopher Achen and Larry Bartels studied what happened when you asked Democrats and Republicans whether the deficit had gone down under Bill Clinton (it had, dramatically). Achen and Bartels found that better informed Republicans were more likely to get the question wrong than less-informed ones. A prior Bartels paper found that better-informed Democrats were likely to say inflation didn't decline when Reagan held office (it did). It looks like the more you know and care about a political topic, the more likely you are to try to ignore evidence that makes the other side look good.

Since American partisans tend to be so invested in the Israel-Palestine issue, you end up with a debate so tribal that even basic analytic issues become deeply, inextricably divisive.

Take, as an example, the long-ongoing debate in the US over "linkage." That's conflict-ese for the idea that the Israeli-Palestinian conflict makes other problems in the Middle East harder to solve. Linkage proponents say that the unresolved Israeli-Palestinian problem entrenches other Middle East problems, like violent Islamic extremism or the prevalence of dictatorship. Opponents say Israel-Palestine just isn't that big of a deal for other conflicts in the Middle East.

Logically, there's no reason why you have to accept linkage if you're critical of the Israeli occupation, or vice versa. Let's say you think Israel is in the right about basically everything in the conflict — Palestinians aren't partners for peace, the land is Jewish by right, the whole package. There's no reason, believing all of that, you couldn't recognize that many Arabs disagree. And that Arab frustration over the conflict contributes to bigger regional problems.

Conversely, it's entirely possible for someone who is highly critical of Israel to also reject linkage. Yet, when it comes to Israel-Palestine, Americans rarely if ever seem to hold such a set of viewpoints. Read through magazines and op-ed pages consumed by the Israel-Palestine debate, and it's obvious that linkage is a tribal issue. If you're "pro-Israel," then you almost never accept linkage. If you're "pro-Palestinian," then of course Israel's occupation is linked up with other Middle Eastern problems. 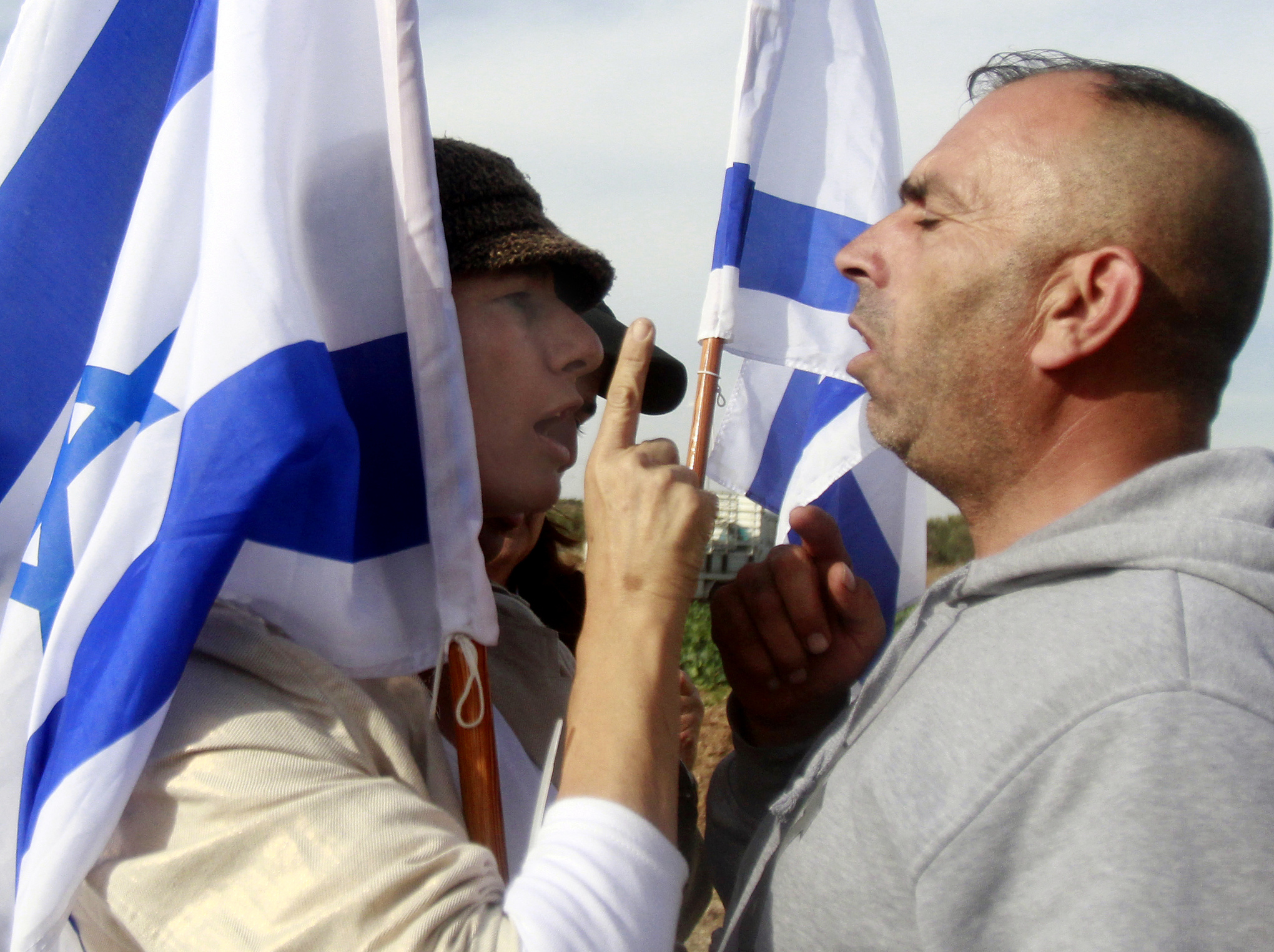 An Israeli settler argues with a Palestinian. Musa al-Shaer/AFP/Getty Images

"The racist oppression and humiliation of Arabs in the Holy Land," former US Ambassador to Saudi Arabia Chas Freeman says," is "at the root of regional instability." Ron Paul and Noam Chomsky argue that US support for Israel contributed to al-Qaeda's rise.

In the reverse, the conservative pro-Israel magazine Commentary frequently runs pieces disparaging linkage. They have titles like "Final Blow to anti-Israel Linkage Myths?" There are numerous other examples of pro-Israel writers denying linkage.

The ideological battle lines settle where they are, of course, because the public debate on linkage isn't a dispute about facts so much as a debate about blame. The question isn't whether the Israel-Palestine conflict has contributed to the growth of Islamist extremism; it's whether Israel is to "blame," in some small part, for 9/11. The point of the debate isn't to get to the truth of the matter. It's a quest in defense of your tribe's moral superiority.

Another example. Whenever a round of open warfare, like the fighting in Gaza we're currently seeing, breaks out, there's always over a dispute over who started it. Pro-Israel people blame Palestinians; pro-Palestinian people blame Israel. Of course, it's conceivably to say "Yes, Israel/Palestinians started the current round of fighting, but they were right to." But almost nobody ever does. That's because admitting your side fired the first shot is a subtle admission of moral culpability in many people's eyes. And your side, of course, is always right.

This even muddies issues of basic facts

Adam Shatz, a well-respected left-wing journalist, has a wonderful piece on this issue in the most recent edition of The Nation. Shatz is a sharp critic of Israel, and he doesn't let up in this piece. "I have witnessed the occupation's horrors firsthand," he writes. "The subjugation of an entire people through a system of pervasive control and countless petty humiliations, always backed by the threat of violence; the confiscation not only of that people's land, but of its future."

But the real target of Shatz' new essay, though, is something he calls "Palestine-centrism." Shatz detects a tendency among his fellow leftists to wrongly lay all of the region's problems at the doorstep of the Israeli-Palestinian conflict (and of the United States). Tracing the problem back to eminent Palestinian-American scholar Edward Said and his book Orientalism, Shatz argues that the left too-often misidentifies Israel or Western interference as the root cause of regional problems:

As the regional balance of power has shifted and American dominance wanes, I have begun to worry that an all-consuming preoccupation with America and Israel leads progressive writers to become strangely incurious about the crimes for which the West can't be blamed and the developments, such as the politicization of sectarian identity, that are shaking the region far more profoundly than the Israeli-Palestinian arena. This paradigm also leads them to belittle, or simply to overlook, what academics call "agency": the fact that people act in this region, and are not merely acted upon by more powerful external forces. And it has increasingly been my sense that much of the work Said inspired fails to examine the lived experience of people in the region; it often relegates much of that experience to silence, as if it were unworthy of attention or politically inconvenient.

Enormously liberating when it was developed, the critique of Orientalism has often resulted in a set of taboos and restrictions that inhibit critical thinking. They pre-emptively tell us to stop noticing things that are right under our noses, particularly the profound cleavages in Middle Eastern societies — struggles over class and sect, the place of religion in politics, the relationship between men and women; struggles that are only partly related to their confrontation with the West and with Israel. Indeed, it is sometimes only in those moments of confrontation that these very divided societies achieve a fleeting sense of unity.

The theoretical intricacy of academic anti-Orientalism, its hermetic and sophisticated language, sometimes conceals an attempt to wish away the region's dizzying complexity in favor of the old, comforting logic of anti-colonial struggle. Anti-Orientalism will continue to provide a set of critical tools and a moral compass, so long as it is understood as a point of departure, not a destination. Like all old maps, it has begun to yellow. It no longer quite describes the region, the up-ender of all expectations, the destroyer of all missionary dreams.

You could imagine a conservative version of Shatz making a similar argument chiding overly zealous defenders of Israel for simplifying the conflict. What's so refreshing about this is that it cuts through the typical fights over narrative and factual intricacies that suffuse the Israel-Palestine conversation. Each side's narrative is all-consuming; either you accept the right set of facts or you are punished as a deviationist.

This disagreement includes basic facts. How many civilians have Israeli military operations killed? How fast are the Israeli and Palestinian populations growing? Did Israel believe an Egyptian attack was imminent when it launched the Six-Day War in 1967? How much does the Israeli occupation hurt the Palestinian economy? There's an acceptable set of answers for each question, depending on which ideological camp you fall into.

This makes productive debate on Israel-Palestine essentially impossible. No one agrees on a set of shared facts, because agreeing to give ground on a factual issue means compromising on your side's moral superiority or policy prescriptions. How can you agree that the Palestinian population is growing faster than Israel's, to take one example, if you're fundamentally unwilling to accept that there is tension between Israel's status as a Jewish state and as a democracy?

Now, this doesn't mean that we should collapse into false equivalence. Sometimes, one of the two sides' narratives is just right. My colleague Max Fisher's piece on the West Bank occupation's essential, fundamental wrongness is a clear example of calling out one side's dissembling for what it is.

But dispelling myths about the conflict should help solve it. As things stand, the broken Israel-Palestine discourse admits little in the way of helpful policy thinking. Meantime, the situation on the ground in Israel-Palestine gets worse, and no one in the US seems to have any idea what to do about it.