Millennials have been a godsend not only for crotchety columnists but also for finance journalists. While opinion writers worry that young adults are lazy and entitled, there's a parallel trend of worrying about whether Millennials are good at managing their money.

And this week comes another reason to fret. When asked what the best place is for money they won't need for the next 10 years, the largest share of adults age 18 to 29 — 39 percent — said cash investments like savings accounts and CDs, according to a new survey from Bankrate.com. That's three times the share that said the stock market, which has a much higher return. 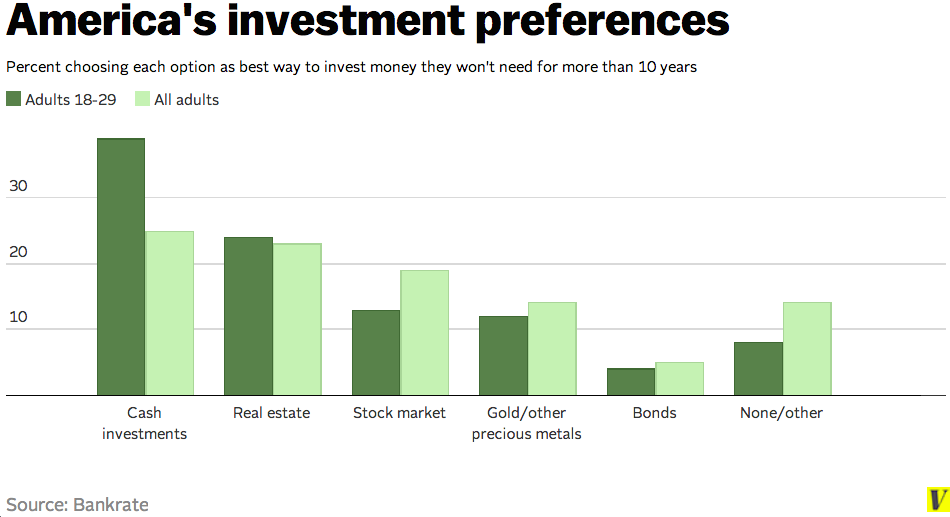 Not only that, but Millennials seem to be holding steady on their low-return investment strategies, even while everyone else goes for higher-risk, higher-reward investments. As Bloomberg reported earlier this year,  around two-thirds of Americans age 30-49 are invested in stocks now, up from 58 percent just one year before. For Americans under 30, however, the share held at 27 percent.

All of this adds to a pile of evidence that youngsters need better money management skills. After all, they are way too risk-averse for their own good. Maybe. Or maybe Millennials are just fine. No, wait, they're screwed. (Have I waded into this debate? You bet.)

if all of your money is in a savings account, there's a good chance it's losing value as you read this.

But all of this fretting inspires the question of why we are so obsessed with a generation's financial know-how. It's not just that Millennials have been dumped from school into the longest downturn since the Depression, with stagnant wages for many.

It's that the retirement system we have waiting for them is broken. It's complicated, it has low participation rates, people are not saving nearly enough, and for many, it shifts the risk and responsibility of not-living-in-squalor in one's golden years squarely onto the worker and that worker's investment abilities.

That's not just the risk and responsibility of saving enough and investing well — it includes the risk of life's catastrophes: health emergencies, job loss, acts of God, all of which can cause a person to dip into retirement savings.

according to one survey, 36 percent of workers and 29 percent of retirees have less than $1,000 saved up for retirement

Defined contribution plans like the 401(k) have become the centerpiece of the retirement saving system. The truth is that the 401(k) was never originally intended to be the main way lots of Americans saved for retirement.

Even the man credited with inventing the vehicle was repeatedly criticized it. Ted Benna, then a co-owner of a benefits consultancy in Philadelphia, created the 401(k) in 1978 to take advantage of a little-noticed section of tax law allowing for tax-deferred retirement savings. What he initially created as one simple option for workers to take advantage of — the initial 401(k) had only two investing options — has become a byzantine system. Though Benna still thinks it's smart for people to sock money away into a 401(k), he also has lamented the complicated, pervasive instrument it has become. In 2011, Benna called it a "monster." Today, there are entire books dedicated to saving up in your 401(k), with tips on everything from dodging fees to choosing from dozens of funds.

All this leaves many workers woefully underprepared for retirement. According to the latest Retirement Confidence Survey from the Employee Benefits Research Institute, 36 percent of workers and 29 percent of retirees have less than $1,000 saved up for retirement.

So it's not that scrutinizing Millennials' financial choices amounts to pointless worrying. It's simply the best advice to save early and often, and in the highest-return vehicles possible — if you're 25 and you're putting all of your money in a savings account, there's a good chance it's losing value as you read this, and could be doing you much more good elsewhere. Now go — close this page and move your money right now.