Guinea worm is almost eradicated, in one of the biggest public health wins ever

Share All sharing options for: Guinea worm is almost eradicated, in one of the biggest public health wins ever

It's been decades in the making, but we may finally be close to eradicating the guinea worm, a nonfatal but debilitating parasitic infection that affected millions of people as recently as the 1980s. NPR's Michaeleen Ducleff reports* that the Carter Center, the NGO that has lead the charge to eradicate guinea worm, has counted only 17 cases of the disease in the first five months of this year, compared to 68 in the equivalent time period last year. Here's the trajectory infection rates took from 1986 to 2008: 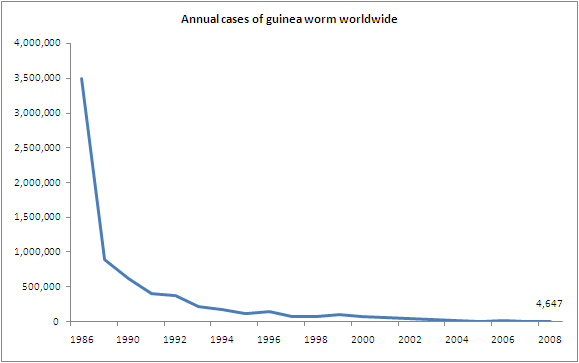 With victory in sight, it's worth reflecting on some of the more remarkable aspects of the campaign that got us here.

It happened without a vaccine or cure

The treatment for Guinea worm hasn't changed in thousands of years — and it's awful. To understand what it is, you need to know how the worm itself works, which is illustrated well in this Carter Center graphic: 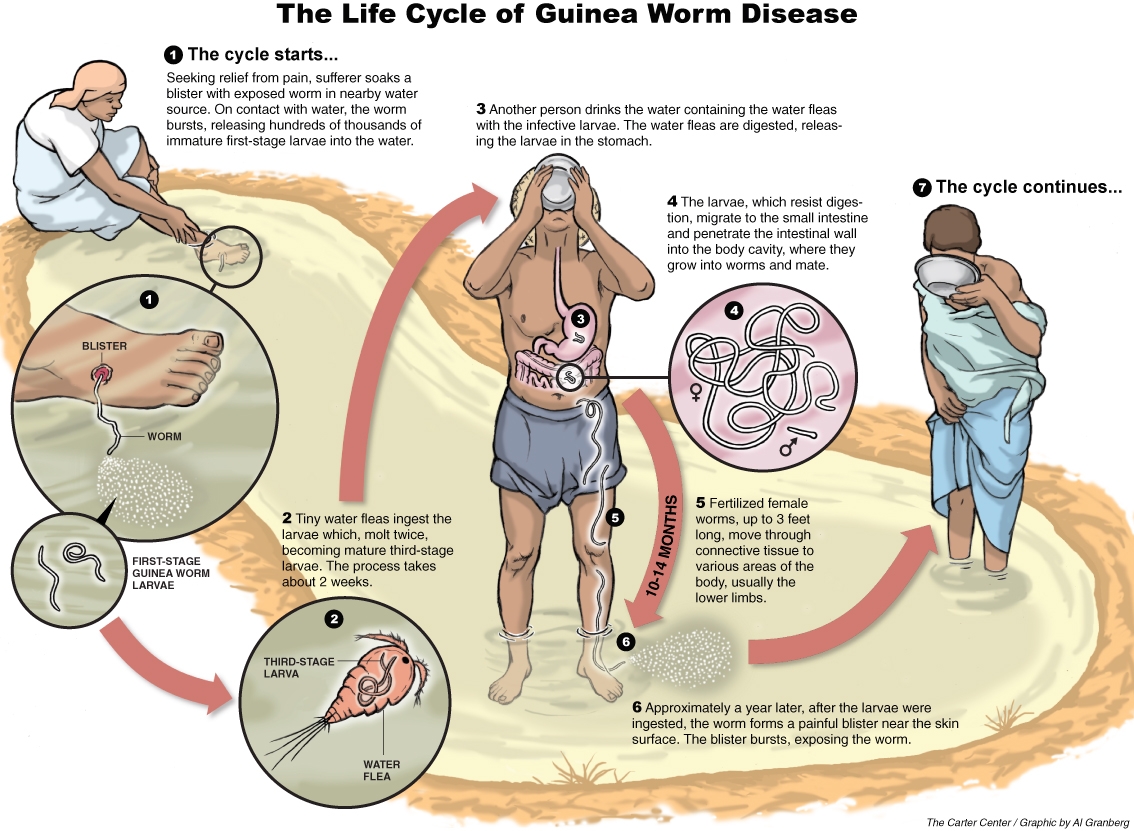 Once the worm is exposed, treatment consists of gradually coaxing it out of the affected person, a process that, given that worms can be as long as a meter, can take days if not weeks. It's a hugely time-consuming and painful process. Other than antibiotics to prevent infection at the site of the wound, and painkillers to ameliorate the pain of the process, there's little drugs can do to help.

So if you can't vaccinate people or offer drugs to kill the worm larvae before they grow into worms, breed, and cause intense pain and debilitation, how has the disease been cut back so dramatically?

Education and infrastructure did most of the heavy lifting 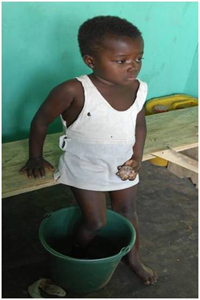 A child immerses a foot in water to hasten the emergence of the worm. Photo by Louise Gubb / Carter Center via CDC.

According to Donald Hopkins, vice president for health programs at the Carter Center, a major tactic that made eradication feasible was public health education. The key problem was that people with the worm were submerging affected body parts in shared water sources; the exposed worm then expelled a "milky white liquid into the water that contains millions of immature larvae." Those larvae are eaten by water fleas (or "copepods") which those drinking the water get into their digestive system.

Once there, the larvae burst out of the copepods and then work their way out of the small intestine and into the body cavity, where they mate and grow into full worms. The full worms make their way out through the lower body or another body part. At the point of exit, the worms form blisters which burst and expose the worm, such that if it's brought back to a common water source, the cycle repeats itself.

The cycle was broken by teaching people to (a) providing finely woven cloth filters which remove the copepods, preventing people from getting larvae in their system (b) treating water sources with temephos, which kills the copepods (c) providing clean drinking water sources (d) detailed and rigorous case monitoring of cases and outbreaks and (e) teaching affected people to not deal with their wounds by soaking them in a local water source. Dr. Michele Barry explained how (e) works in practice in the New England Journal of Medicine:

In Uganda, the eradication program has employed elderly men as "pond caretakers" to guard ponds against contamination by worms emerging from people. When infected people are identified at a pond, the caretakers assist them with water gathering, preventing contamination of the water, and distribute nylon filters for ongoing prevention. Cash rewards are sometimes offered to those who report cases or to infected villagers who agree to be quarantined while the worm is emerging; often such persons receive free care and food during that period.

It was remarkably cheap

Hopkins estimates the total cost of the three-decade-long eradication campaign at about $350 million. Any way you slice it, that's a bargain given the amount of human suffering averted. A 2011 Center for Global Development case study pegged the cost at $5-8 dollars per person treated; a 1997 analysis by the World Bank estimated that if one only considers the increase in agricultural productivity that would result from eradicating the worm  (achieved by eliminating worm-related work absences), and no other potential benefits, the rate of return is 29 percent. In other words, for every $1 invested in the campaign, $1.29 came back in the form of greater agricultural output and earnings.

Even better, the campaign comes with a number of positive externalities that help accomplish other global development tasks. There's the increase in agricultural productivity, for one thing, but additionally, researchers at the Carter Center and Emory point out that school attendance can tick up when an area is rid of guinea worm. They cite a study in Nigeria which found that villages given wells (providing a source of clean, worm-free drinking water) saw the incidence of the disease fall 62.5 percent and attendance at school rise 50 percent, and enrollment go up by 12 percent.

We haven't gotten rid of guinea worm just yet, and it's important to remain vigilant until we do. But from the looks of it, the Carter Center and other groups working on eradication have a rather tremendous victory on the horizon.

* Thanks to the Center for Global Development's Michael Clemens for the pointer.