The complete history of civilian airliner shootdowns, in one chart

Share All sharing options for: The complete history of civilian airliner shootdowns, in one chart

Hundreds of people have died in civilian airliner shootdowns over the past 84 years, and most of the incidents involved militaries.

Twitter user dmanww mapped and charted the recent history of civilian airliner shootdowns in this infographic, which you can click to see the full interactive version. (The embed is too large for Vox's pages.) 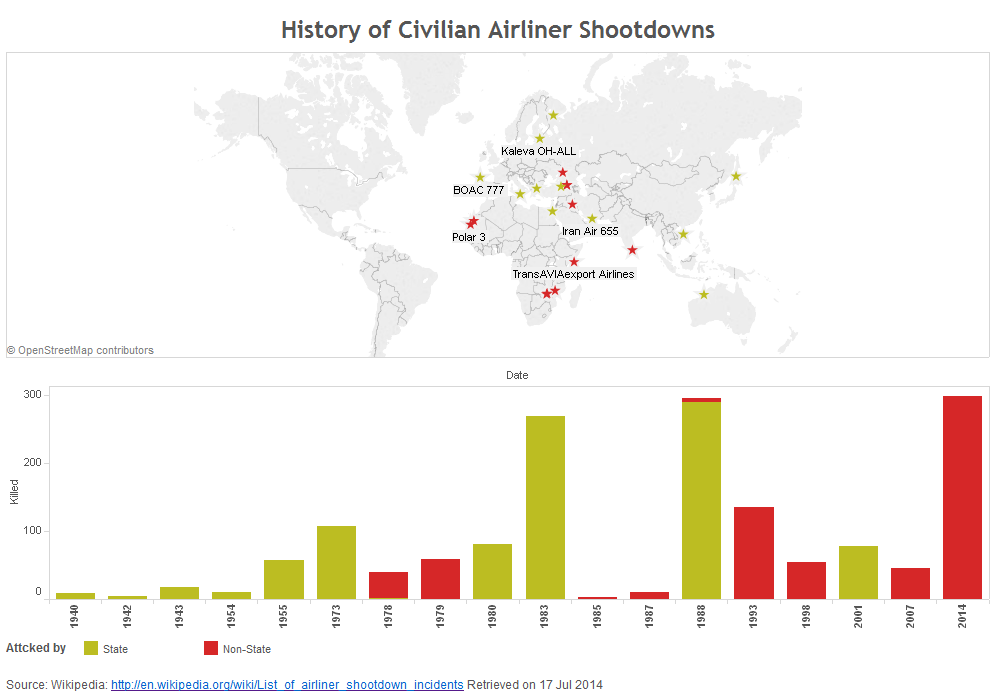 As Vox's Dylan Matthews previously explained, many of these shootdowns involved warring or otherwise in-conflict nations.

A US battleship, for instance, shot down Iran Air Flight 655 after confusing the plane for an enemy fighter during a skirmish with Iranian ships toward the end of the Iran-Iraq War. About 290 civilian passengers died as a result. The US government insisted the shootdown was an accident, but it never formally apologized for the incident after President Ronald Reagan's initial statement. Vox's Max Fisher wrote for The Washington Post that, to this day, the loss of Iran Air Flight 655 contributes to Iranians' mistrust of Americans.

In many cases, these losses appear to be horrific misunderstandings. After the Soviet Union downed Korean Air Lines Flight 007 and killed the 268 passengers and a congressman (Larry McDonald, a Georgia Democrat) on board, documents revealed that Soviet personnel appeared genuinely baffled and concerned by the presence of an unknown aircraft. They did not, in other words, seem to purposely target and kill civilians.

None of that alleviates the deep loss of human life in these tragedies. But it is somewhat comforting that in many cases, including the crash of MH17, even feuding governments and groups are so aware of the unjustifiable loss of human life that they don't want to look culpable.