Share All sharing options for: Young college grads' wage growth is falling farther and farther behind

If you've been reading economic news in the last few years, you know that recent college graduates face an ugly job market, and many are stuck in their parents' basements. And it also appears that those lucky enough to have jobs are falling farther and farther behind in terms of pay.

Wages are rising, but not for young grads

A new analysis from the San Francisco Fed finds entry-level earnings for new college grads — defined as working graduates age 21 to 25 — grew only by 6 percent from April 2007 to April 2014. In comparison, median weekly earnings for all workers grew two-and-a-half times as fast, at 15 percent. And while recent grads tend to fall behind after any recession, the gap since the Great Recession has been both wide and long-lasting. 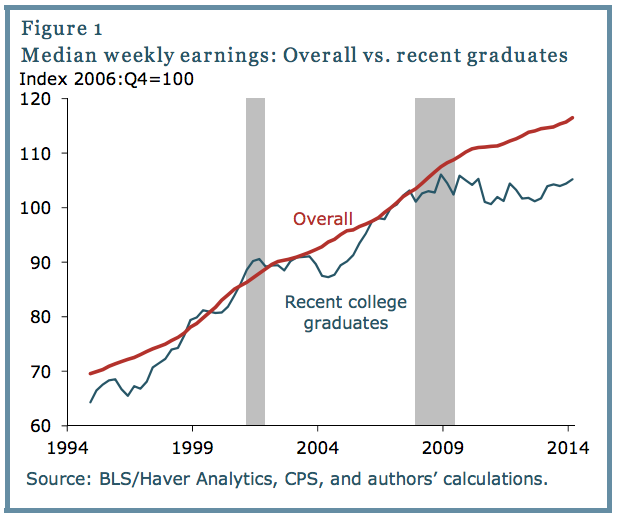 Even while other workers see their wages slowly climb, the return on a shiny new college diploma seems to be waning. (Though to be clear, this chart shows wage growth, not levels — it's still true that college diplomas tend to mean higher wages than high school diplomas.)

So what's going on? Just a bad economy, write San Francisco Fed researchers Bart Hobijn and Leila Bengali. They find wages have stagnated across the board, in a variety of occupations. That, they conclude, signals that the flat wage trend is cyclical, not structural — or, in non-econ-speak, it means the stagnant wages are due to a bad economy, not something fundamentally wrong with graduates or jobs, like a mismatch between recent grads' skills and open positions.

employers may be hesitant to lower older workers' pay, for fear of hurting morale or facing high turnover costs

But more interestingly, if that's true, why would a bad economy tax recent college grads so heavily? College graduates may be high-skilled workers, but they are also "marginal" high-skilled workers, the bank's economists write. Because they're new, they aren't as subject as older workers to downward wage rigidity — the phenomenon of employers keeping wages where they are, rather than lowering pay, even when it might make sense to.

There could be a number of reasons for this. One is that employers are hesitant to lower existing, older workers' pay and hurt morale. Some employers also might hold wages steady for fear of the heavy turnover costs of losing existing, higher-skilled workers.

Higher wages may be on the way

Not everyone might agree with the Fed's assessment — those in the STEM shortage crowd, for example, believe workers' poor employment prospects are structural and due to a skills mismatch.

But if the Fed's analysis is right, it means it's only a matter of time before young grads at long last experience the same wage growth as everyone else. And when they do, it might finally be one of the signs we've been looking for that the labor market is healthy again.