The human population of space, in one magnificent timeline

Share All sharing options for: The human population of space, in one magnificent timeline 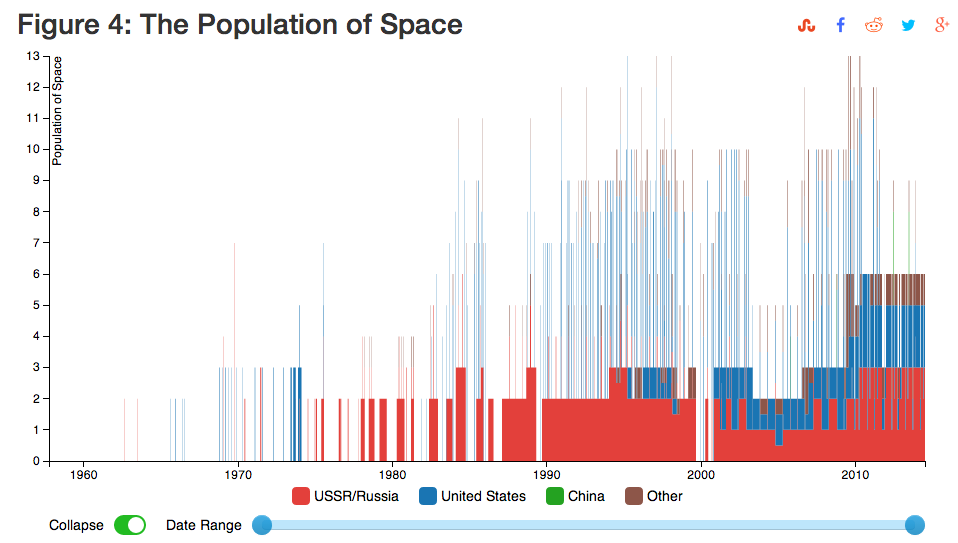 The proprietor of the Nefarious Plots blog made this interactive timeline of who's been in space and when. On the blog, it's interactive, with zoom and and rollover capability that lets you explore each person. But even from this screenshot, you can get a sense of the patterns of astronaut activity.

Check out the big, red USSR/Russian blocks versus those skinny American lines in blue. That's because the American presence in space has often consisted of shorter missions. A lot of this discrepancy has to do with access to space stations, where people can hang out for long periods, sometimes even longer than a year at a time.

Russia (and before it the USSR) has had a nearly continuous series of space stations since the 1970s. In contrast, the Americans only had Skylab from 1973 to 1979. Then there was a big gap before US astronauts started visiting Russia's Mir station after the fall of the USSR.

Starting in 2000, you can see a more continuous presence of Americans with the construction of the International Space Station. Currently, two space stations are orbiting Earth. That one and China's Tiangong-1, which launched in 2011.