Masters of Sex, episode 2: what it looks like to move toward equality

Share All sharing options for: Masters of Sex, episode 2: what it looks like to move toward equality

Welcome back to our weekly coverage of Masters of Sex. To read last week's entry for the season premiere, please go here.

Libby Masters has hired a new nanny, at the behest of her husband, who doesn't want his mother around anymore. Her name is Coral (Keke Palmer), and as a young black woman living in late ‘50s/early ‘60s St. Louis, she comes from a literally different world than Libby does. The episode underlines this, too, in the women's twin pronunciations of the word "ask."

Coral might be a great nanny. She might know how to get the Masters' son to immediately stop crying. But the fact that she says "aks" instead of "ask" opens up a gulf between the two women, one that Libby tries to get her to close by changing that pronunciation. And for a moment, it's all that Libby can think about, all that either of them can focus on. Coral finally shifts, seemingly just to placate her employer, but it exemplifies the world of difference between them.

And it exemplifies the deepest message of "Kyrie Eleison," an excellent episode that builds on an already excellent premiere: no matter who you are or where you are, someone is going to try to tell you the way that is proper to live your life. And that could clash against your very view of yourself.

The micro-aggressions of mid-20th century America

Now, Libby's micro-aggression is pretty minor in the list of things that are visited upon people in this episode because they think they need to be "proper." After all, the medical case of the week in this episode revolves around a young woman whose mother wants her to get a hysterectomy after she has to be hospitalized due to complications arising from an illegally obtained abortion. That's stretching the idea of propriety to its breaking point, and in a heartbreaking scene, the girl talks about how she views her sexual desire almost as a monster that lives inside of her, demanding she sleep with boys she's attracted to. This is the end result of something as simple as demanding that everyone live up to some sort of pointless code of gentility. Eventually, some people will feel less than.

Of course, there are needs for codes. If you suddenly started pronouncing every word in the English language differently from everybody else, they would probably ask you to stop. Similarly, we have a bunch of rigid codes and laws built up around certain aspects of our sexuality because we need them. So much of what human law is all about is coming up with ways to make sure to honor everybody's individuality while still making sure that individuality doesn't infringe on anybody else's rights, or those of society as a whole.

But it's different when it's "aks" versus "ask." Libby knows what Coral means. She just prefers the other way. And, honestly, Libby genuinely thinks she's helping, genuinely believes she's making Coral's life better somehow. But the tension that crackles through the scene is real, because it's someone with all of the power and privilege in the situation deigning to settle down beside someone who has none and telling them how they should, nay, must live their lives. 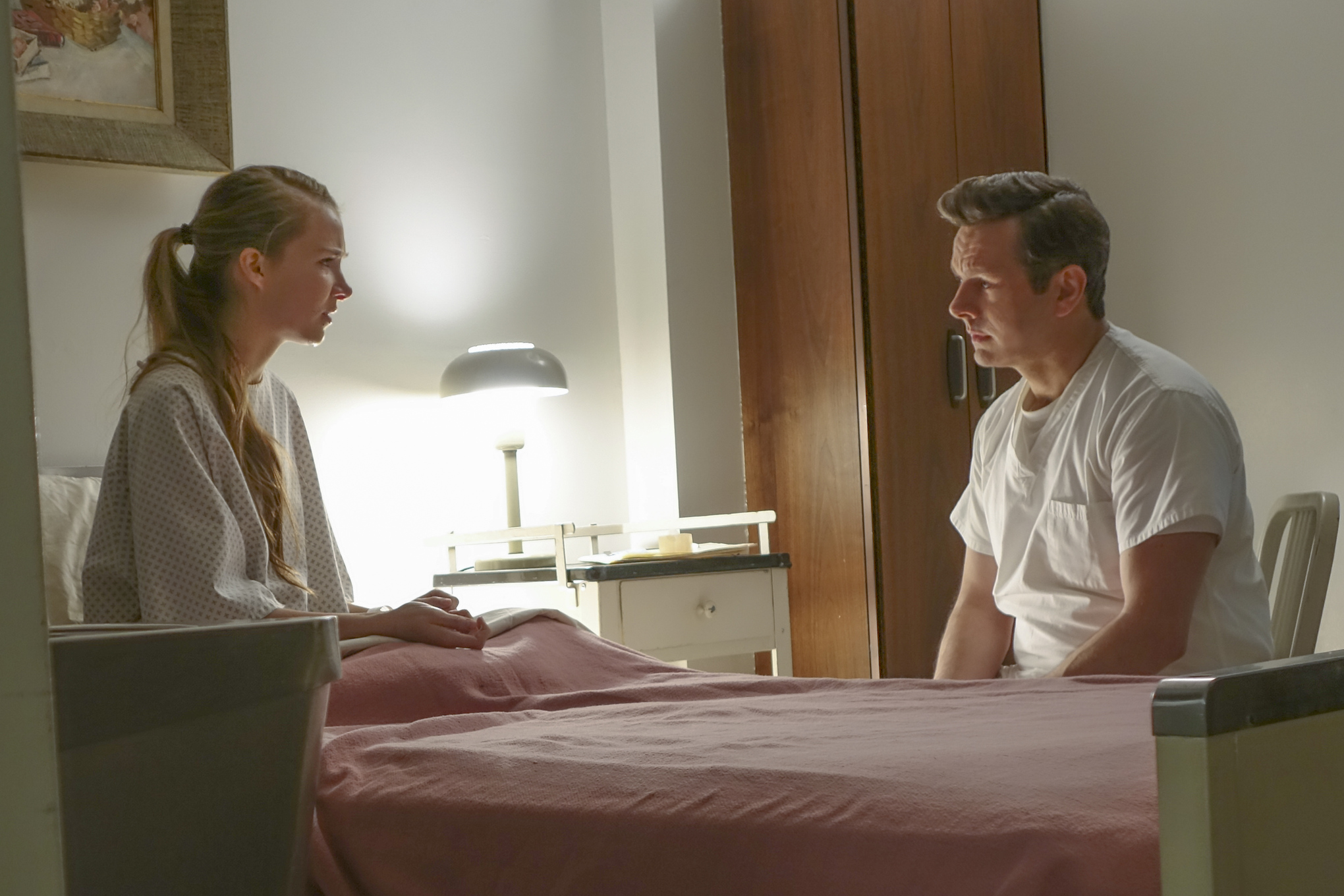 Bill advises a young woman on her options.

Really, this is the central struggle of every character on Masters of Sex. The micro-aggressions of mid-20th century America weigh heavily on them, but so do the ideas of who they're supposed to be, the rigid world that they're supposed to fit into. This is similar territory to where other period pieces (like Mad Men) have headed when considering the time period, but what's interesting here is the way that Bill and Virginia's work is part of the hammer that will bring down the wall between the world that was and the world that will be, a world where people are still told how to behave properly but where there are increasingly a multiplicity of possibilities of how to live your life.

"Kyrie Eleison" seems to point to this at nearly every turn. When Bill is arguing with Greathouse about performing the hysterectomy, he starts listing off all of the potential sexual dysfunctions he could conceivably cure if people would start treating them as physical conditions, rather than moral deviancies. He's talking about the young woman, arguing that she shouldn't simply be thought of as a whore. But when he makes that list, he tosses in homosexuality as one of those deviancies that might have a cure. Out in the waiting room, Betty (a closeted lesbian who's spending time at the clinic pretending to be working on her fertility, when she's just running out the clock until her husband finally gives up) winces.

And, of course, there's the man that both Bill and Virginia keep trying to get in touch with throughout the hour, the man whose so-called deviancy drove him to attempt suicide: Barton Scully. He's on a vacation, his daughter says. But it's a pall that hangs over the rest of the hour, maybe the rest of the season. This is what happens when you try to push everyone into the same tiny box.

One of the things that makes all of this bearable is that Masters is frequently one of TV's funniest shows. "Kyrie" is another great example of this, whether it's the mere presence of Betsy Brandt as Bill's new secretary, or the interplay between her and Betty, who settles in for the long haul and offers snarky commentary on everything that's happening at the hospital. (Betty also provides one of the better dramatic moments of the episode, when she takes the girl who was to have the hysterectomy and tells her about the time she struck back violently at her own mother. Annaleigh Ashford has been a tremendous asset to the show this season.)

That humor cuts through what could be a very dry series, and it helps the show sell that its understated, analytical tone is meant to be, in some ways, a bit of a come-on. Masters is a withholding tease of a show, one that entices through things that emerge out of nowhere. The first season played around with the idea of Virginia and Bill as partners and lovers (in almost every sense of both of those words), but the timing of that relationship was herky-jerky and fascinating. And now that we know how much we like to see those two together, the show is deliberately keeping it from us as much as possible. Bill and Virginia keep being drawn to each other, so the show's design is to keep them apart, even as they're together.

After the season premiere offered up an hour that spent much more time checking in on where everybody in the show's ensemble was, I appreciate that "Kyrie" does much more to return to the show's usual format. There's a medical story of the week with the hysterectomy. There are scenes with the ensemble players at the hospital. The season still feels a little underpopulated, given how beautifully season one built out the ensemble, but that's probably inevitable in a season where many of the recurring players left for other projects.

Fortunately, director Michael Apted, who's handled both of the first two episodes, is here to keep the episodes on tone and on task. Apted isn't a director of huge visual invention, but he's great at keeping the pace going and at making sure that the important moments register. That little battle between Libby and Coral is one that wouldn't work as well as it does without his ability to keep the camera on Palmer and Caitlin FitzGerald as the real struggle between the two of them plays out on both of their faces. Because this is largely a series about how people keep their real selves hidden from a society they fear might judge them, it's so important to capture the moments when those real selves slip through the cracks for just a second.

Apted also utilizes color beautifully. Look at the first scene of the episode, the girl eating dinner with her parents, only to reach down between her legs and find blood there. The room they're dining in is bland, almost beige to a fault, but there, present at all times, is this reminder of who these people truly are and what underlies everything else. It's the splash of color amid empty hues, the jolt that could represent danger or release. It is the world that is coming. 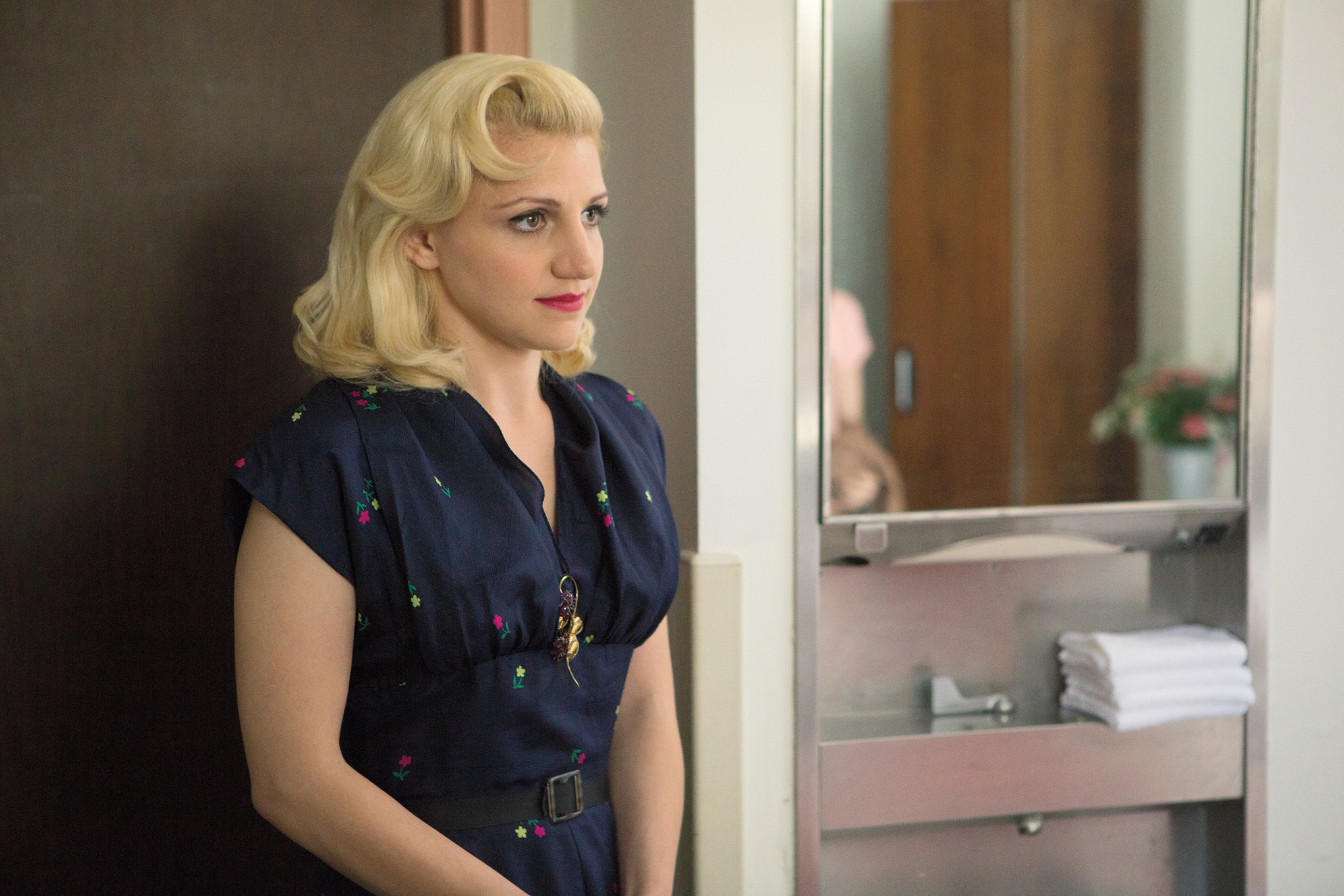 Betty has some good advice.

A relationship between equals

It's telling that the alternative Bill thinks of to giving the girl a hysterectomy is giving her an early version of an IUD. It might not be the kind of birth control we're used to, but it will give her a way to have sex without having to lose her ability to have children someday. It will let her be herself, while still being able to negotiate her complicated relationship with her parents. And, really, that sounds like the world that opened up for a lot of women in the wake of the pill's seismic arrival on the scene. Once your life is not inextricably tied to your own uterus, what then?

Really, what this season is accomplishing by placing the scenes between Bill and Virginia at points where they become key touchstones, rather than the whole reason for the show to exist, is creating the sense of the story of a world that is breaking down its established social strata and moving toward relationships between equals. Obviously, we still live in a world where there is so much work left to do in that regard. But we also live in a world where we're more consciously aware of that work than ever. Libby doesn't realize how casually she dismisses Coral when she has the pointless battle over pronunciation. But she does.

The world of Masters of Sex is one where the characters aren't always aware of the work that remains to be done, the people they're left to become. But in a tiny moment, a single gesture, a single reaction, can hide something amazing. In its best moments, Masters of Sex vibrates with the ripples in the water glass from the earthquake that is on its way.