"You carry that burden for the rest of your life”

Share All sharing options for: What it’s like to lose a loved one in a plane crash

Twenty-five years ago this week, United Airlines flight 232 took off from Denver, bound for Chicago. Midway through the flight, while the plane was at a cruising altitude of 37,000 feet, an engine exploded. Shrapnel from the blast cut the plane's hydraulic lines. The flight controls stopped working.

"It was about to dive to the earth, seven miles below," said Laurence Gonzalez, a journalist who's just published the book Flight 232, a comprehensive account of what happened that day. "It would have killed everyone."

But it didn't. The captain was able to steer the plane to a crash landing at a Sioux City, Iowa, airport. Of the flight's 296 passengers and crew, 185 survived.

United 232 is not the same as MH17, the flight from Amsterdam to Kuala Lumpur that crashed Thursday in Ukraine. Massive mechanical failure caused the United 232 crash; a missile brought down MH17. The passengers on United 232 had 44 minutes to prepare for their crash landing; MH17 went down instantly. The most poignant difference, of course, is this: United 232 had scores of survivors, while MH17 had none.

Nevertheless, the story of United 232 offers lessons for how the world can respond to plane crashes — and insights into what it's like to live through a traumatic event.

For all the differences between the two crashes, Gonzalez says there's one lesson from United 232  that could have taught helped in the MH17 aftermath: the importance of leaving the crash site untouched until experts can investigate it.

United 232, according to Gonzalez, "gave the world a perfect example of how a community should react in protecting the wreckage. When an airplane crashes, it's a terrible thing, and you have to fight the fires and rescue the ones you can rescue, but once that is done, the most important order of business is to protect the wreckage. The professional, impartial investigators need to come in and examine the wreckage and mark where everything is and photograph everything and document everything. And allow themselves the time to work up a cause of the accident."

This did not happen in the aftermath of the MH17 crash. An article in USA Today detailed the disarray at the crash site on Friday: bodies lay out in the rain, without any protection against the elements. The site wasn't cordoned off, so people could just walk around the area. There was no system for organizing the debris that scattered after the plane was struck down.

It only got worse. BuzzFeed's Max Seddon described chaos at the crash scene on Saturday as Ukranian rebels (the very group suspected to be responsible for the missile attack on MH 17) denied European investigators access to the site. Seddon also reported that many important objects seemed to be missing: pieces of the plane and some of the victims' personal effects. As my colleague Max Fisher wrote, "that the untrained rebels are carting away evidence and refusing entry to actual investigators ... could make it harder for the world to ever fully understand what happened." The poor treatment of the bodies and personal property of the victims could make it even more difficult for their families to heal from this terrible event.

"This is a good time for the world to look at the crash of United flight 232 and take a lesson in how to handle a crash site," said Gonzalez.

The United 232 flight killed 111 people. These victims left behind children and spouses and parents and friends. Gonzalez was only able to speak to a few of these mourners. The rest, he said, "were simply emotionally not capable of talking about it," even years after the crash.

"A day doesn't go by that they're not moved in some way by the death of the loved one that they lost on this flight," he said. "It's something that just stays with you and stays with you. You carry that burden for the rest of your life."

The sudden death of a friend or relative is traumatic no matter what the circumstance. Plane crashes heap on an extra layer of pain. They are public events, subject to hours upon hours of news coverage at the time of the event, and usually follow-up coverage on the anniversary of the tragedy.

"If you lose a loved one in an auto accident, chances are no one will ever hear about it except the people who are close to you," Gonzalez said. "You won't have the added burden of having your life ripped open and exposed to public view. And in a plane crash you really do experience that, and I think it just adds to the emotional burden." 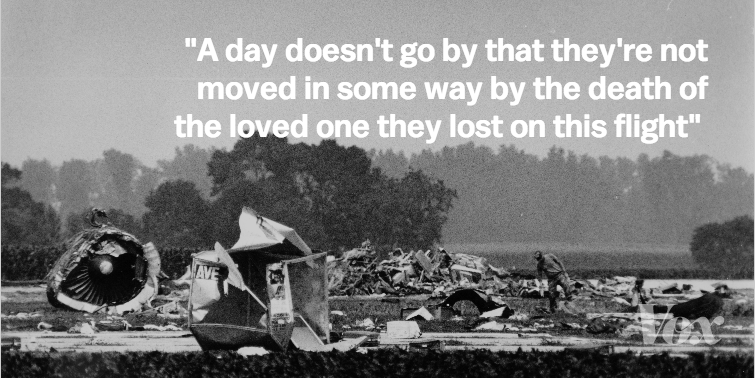 Gonzalez sees this pattern playing out in the wake of MH17.

"You're seeing footage on the television of people waiting for their loved ones and weeping — which you would never see if your loved one died of cancer."

One woman has been forced to go through this ordeal twice this year. Kaylene Mann, from Melbourne, Australia, lost her brother and sister-in-law when Malaysia Airlines flight 370 disappeared in March. Her stepdaughter was on MH17.

"It's just brought everyone, everything back," Greg Burrows, Mann's brother, told the Associated Press. "It's just ... ripped our guts again."

Why plane crashes are so upsetting

Everyone knows the statistics by now: air travel is safe, safer than driving, safer than walking. You're more likely to get struck by lightning than to get killed in a plane crash. And yet plane crashes are deeply unsettling — even when they're not the result of a missile attack.

"You don't completely get over something like this. You find a strategy to work around it."

Gonzalez believes that plane crashes serve as a reminder that chaos exists and can strike at any time.

"We live in our middle-class American society like fish in an aquarium," he said. "The food comes down mysteriously from up above, and we don't really know where it comes from. We just wake up in the morning and there's coffee and good things to eat and there's television to watch and music to listen to. We get all these rewards for doing nothing. And it kind of puts us into a complacent state that, ‘Hey, everything's okay. Nothing can hurt me.'"

A sudden tragedy like a plane crash jars us out of our complacency, Gonzalez says. "You realize, this is a dangerous world we live in. Things do happen."

That so many people survived the United 232 crash is a miracle. And it provides an opportunity to answer the questions: what is it like to come so close to death? How does a traumatic event like this affect the rest of your life? Gonzelez found that longterm, the survivors of United 232 have recovered remarkably well. Some do still suffer from PTSD and anxiety, but not many.

"Most of the people I talked to were able to get on with their lives, to heal, were able to find strategies for not letting this destroy their lives, and were quite successful at that," Gonzalez said. "You don't completely get over something like this. You find a strategy to work around it. And it doesn't mean it's not there. It just means it's not stopping you from living your life."

He says that the survivors who've coped well tend to have a few things in common.

"Part of it has to do with an attitude of being willing to accept the negative emotional impacts of these things side by side with the rest of life — including the ability to experience joy and humor."

Gonzalez cites Al Haynes, the captain of the flight, as a model for using humor to handle a difficult situation well.

"He was struggling and facing the very high likelihood that he was going to lose his life that day, along with the lives of all his passengers," Gonzalez said. Nevertheless, "he kept cracking jokes the whole time. He was amazingly able to retain his sense of humor, and I think it allowed him to function better."

The problem with Ticketmaster, explained not by Taylor Swift

Peacock’s The Traitors should be your new reality TV obsession