Map: Where people have the best-paying jobs

Share All sharing options for: Map: Where people have the best-paying jobs

It's no secret that pay levels can be wildly different from one part of the country to another, and the below map shows just what that phenomenon looks like geographically. The Labor Department this week published a map of where wages are highest in the US (check out the interactive version here): 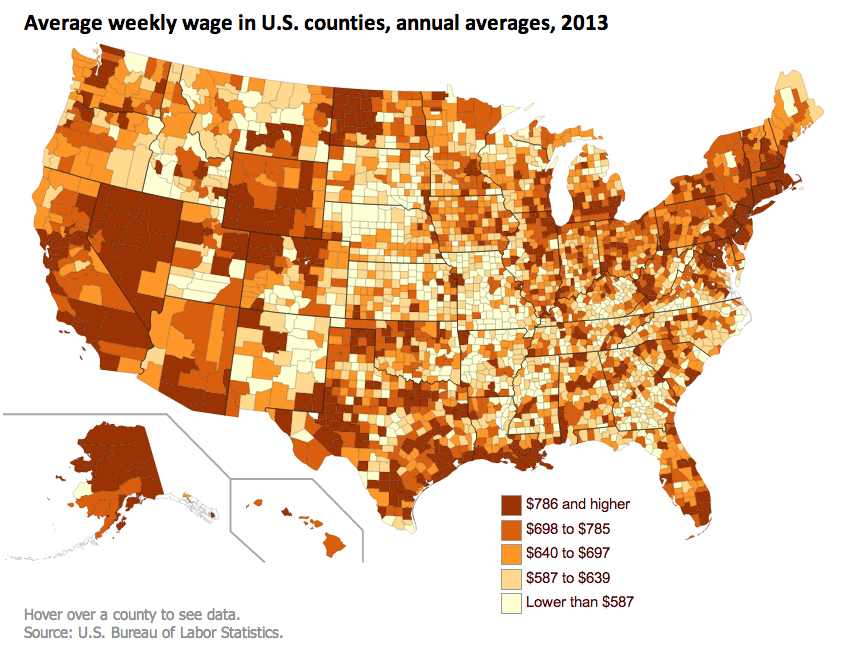 The department found that a majority of US counties have an average pay level below the national average, which is $958. That's not a typo; despite the fact that the top category on the map is $786 and higher, the really high pay levels in a few counties pull that average higher. Of more than 3,200 counties, 246 have pay levels above that average.

It's just that those counties earn a lot. In San Mateo county, in the San Francisco Bay Area, average weekly pay was $1,978. Meanwhile, people in the lowest-paid county, Delta County in northeastern Texas, earned just $378 on average per week in 2013.

Many of the figures in the above map make a lot of sense. Pay is higher in high-cost areas, like the Northeast, San Francisco, and the Washington, D.C., area. Likewise, pay is high in oil-rich places like Odessa-Midland Texas and western North Dakota.

Still, the numbers can be surprising. In parts of the South or Arizona, for example, there are areas of heavy poverty that also are well above the lower end of the pay spectrum. But then, that may be a sign that even low-paying jobs are hard to come by — the wage data only counts employed people.