Who still smokes in America? The poor, middle-aged, and bisexual.

Share All sharing options for: Who still smokes in America? The poor, middle-aged, and bisexual.

Fewer Americans smoke cigarettes than they did 50 years ago, but the downward trend hasn't applied equally among all segments of the population.

As the tobacco industry announces mergers, increases overseas sales, and falls back on e-cigarettes, there are few segments of the US population that the industry still relies on: the poor, the middle-aged, and gay, lesbian, and bisexual people.

Here's a breakdown of those groups and some explanations as to why tobacco is more popular among them. 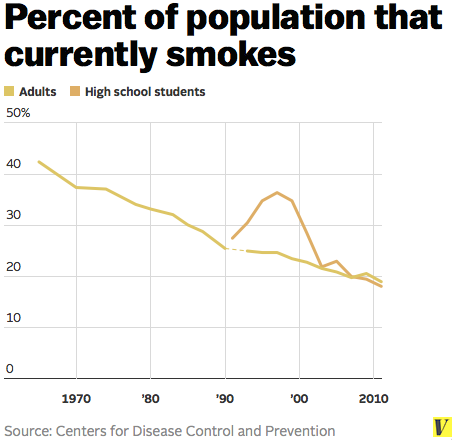 This chart represents one of the biggest public health wins of the past few decades. Through more research into cigarette's health effects, public awareness campaigns, and higher federal and state taxes on cigarettes, anti-smoking advocates managed to bring down the number of US smokers.

But 42.1 million people still smoke. Further reducing that number could save a lot of lives and money: the CDC estimates that remaining tobacco use costs the US more than $289 billion a year, including at least $133 billion in direct medical costs.

2) People who are poor are more likely to smoke 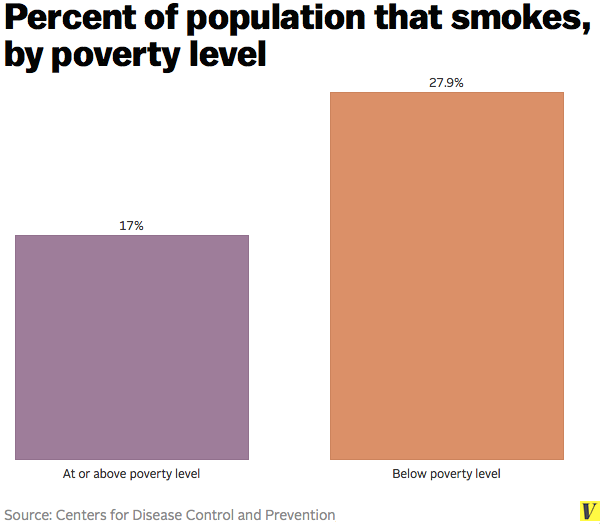 Smoking is a relatively inexpensive way to relax. For poor people, it might be the only affordable way to wind down. The tobacco industry takes advantage of this by actively targeting low-income communities through advertising.

For public health workers in low-income communities, smoking is a huge problem. As Cincinnati school nurses previously told me, one of the biggest hurdles to caring for low-income students is that their home lives often work against them. If a student has asthma, a smoking parent can make the symptoms of the illness much worse — especially if, as is too common in low-income households, the asthma isn't being fully treated in the first place. 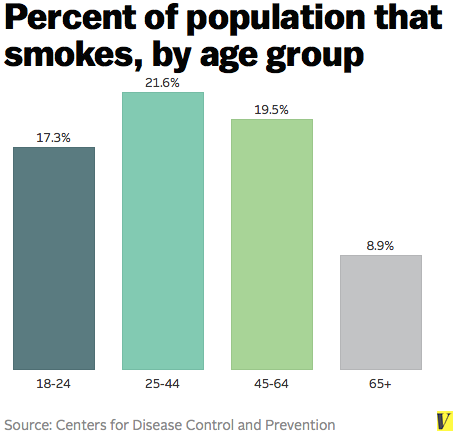 Younger people are much less likely to smoke, perhaps due to the strong public health campaigns of the 1990s and 2000s. Middle-aged people, on the other hand, can still represent segments of the population from the 1960s, 1970s, and 1980s that became addicted before they were aware of the dangers of smoking. Older people, meanwhile, might quit smoking to avoid exacerbating health problems brought on by age.

4) People who are gay, lesbian, and bisexual are more likely to smoke

It's not completely clear why gay, lesbian, and bisexual people appear to smoke more.

Whatever the cause, bisexual Americans also seem to share a few other worrying health trends: less access to health care, lower rates of vaccination, and, in the case of bisexual women, higher obesity rates.

5) People in Kentucky, West Virginia, and Arkansas smoke a lot 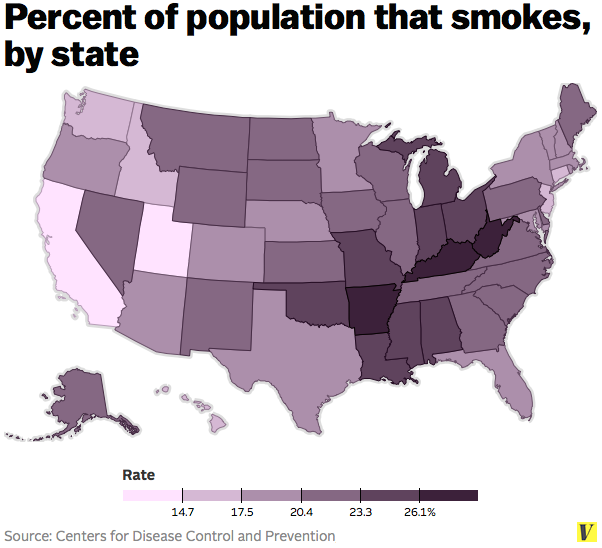 In many ways, this map shows the other factors on this list. Kentucky, West Virginia, and Arkansas, for instance, have some of the highest poverty rates in the country.

Kentucky also accounts for more than half of tobacco production in the US. Since it's such a huge local industry, Kentuckians might feel more incentive to support tobacco by smoking it. Neighboring West Virginia might feel some of that pressure as well. (Arkansas has no major tobacco operations, so its high degree of use is linked to other factors.)

As more Americans quit smoking, these are the last segments of the population that the tobacco industry has come to rely on in the US. For anti-smoking advocates, knowing who these people are and why they're still smoking could be key to eradicating one of the greatest threats to American lives.