Where does your state rank on UFO sightings?

Share All sharing options for: Where does your state rank on UFO sightings?

To commemorate World UFO Day, we checked out the extensive public records of the National UFO Reporting Center — an organization that collects reports of UFO sightings, and refers to itself as "America's foremost UFO Reporting Agency" — to figure out which state is the best at spotting UFOs.

The NUFORC has been in operation since 1974, but its database goes back much further. The oldest record is from a 1561 German cylindrical woodcut — the submission notes, "I would think that Hanz Glaser (the woodcutter) had better things to do than spend months on a wood carving that was too ugly to sell" if it weren't intended as a star map of a UFO sighting. The NUFORC database includes more-or-less monthly records from every month for the past fifty years. The Internet has either made UFOs more common, or it's made it easier to gather data: sightings rarely hit 100 per month in the 20th century, but people are now submitting more than 500 sightings a month.

Thanks to NUFORC, here's a map of UFO sightings per 10,000 people in each state: 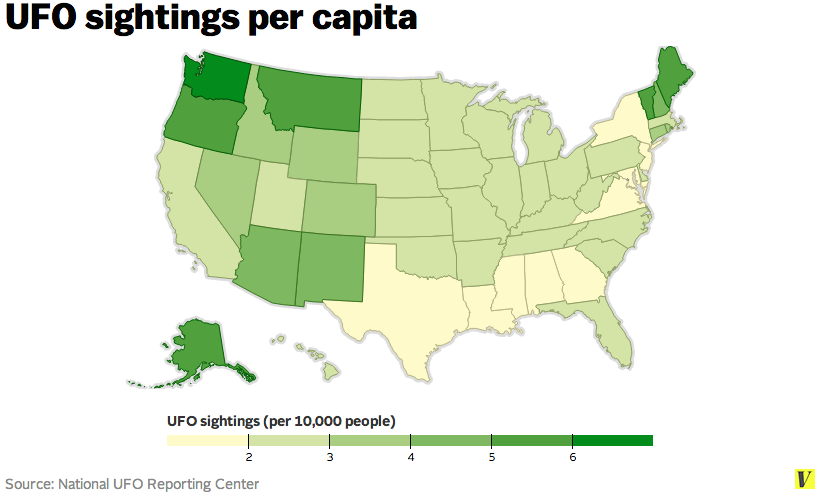 Arizona and New Mexico, unsurprisingly, report more than their share of UFOs. Would-be alien-spotters in both states are probably influenced by the lore of Roswell, NM, where a UFO allegedly crashed in 1947. (What's more surprising is that Nevada, home of Area 51, doesn't report that many sightings.) Other than Arizona and New Mexico, however, the trend is pretty clear: northern states spot the most UFOs, and the Deep South spots the fewest.

But there might be a confounding variable here. This chart, from the Economist, shows when people are most likely to report seeing UFOs:

So to estimate which states are most likely to report UFOs when they're not drinking, we took the map above and controlled it for sobriety, by multiplying each state's UFO-spotting rate by the percentage of people who have healthy drinking habits according to the Centers for Disease Control (i.e. the percentage of adults who haven't engaged in binge drinking in the past month). Alaska, for example, has a UFO-spotting rate of 5.44 per 10,000 people, but 89.8% of Alaskan adults told the CDC they hadn't engaged in binge drinking in the past month. So Alaska's sobriety-adjusted UFO-spotting rate is 5.44 times .898, or 4.29. 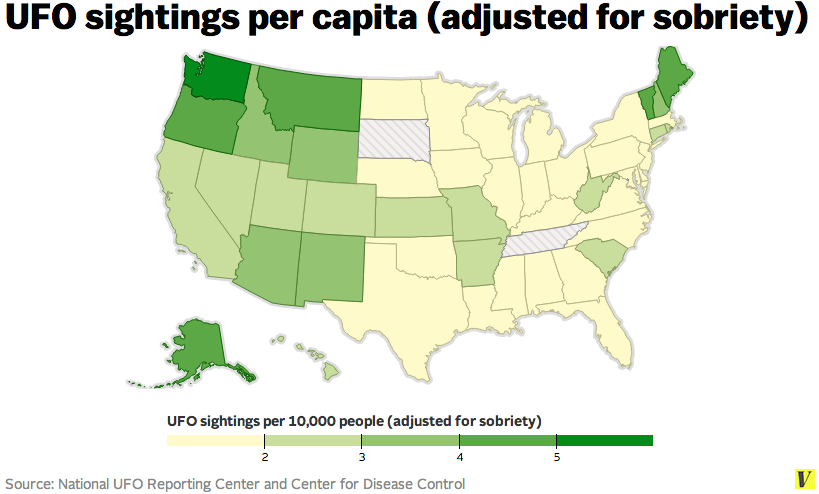 It appears that the Midwest loses its ability to spot UFOs entirely when alcohol isn't involved. But the top states for UFO sightings — the Pacific Northwest and upper New England — are still the top when adjusted for sobriety.

Washington state, in particular, is still the UFO capital of America: it's seen 6.75 UFOs per 10,000 people, and its sobriety-adjusted UFO spotting rate is still higher than most states' unadjusted (i.e. less sober) UFO spotting rates. Maybe the UFOs, like Washington residents themselves, are looking for Bigfoot.