Study: Going vegetarian can cut your food carbon footprint in half

Share All sharing options for: Study: Going vegetarian can cut your food carbon footprint in half

If you're looking for ways to reduce your carbon footprint, try eating less meat. That's one upshot of a big recent study on diets in the United Kingdom.

The researchers found that vegetarians had roughly half the food-related carbon footprint of meat eaters. Vegans were lower still. But even if you don't want to give up steak entirely, just cutting back on meat can shrink the footprint of your diet by one-third: 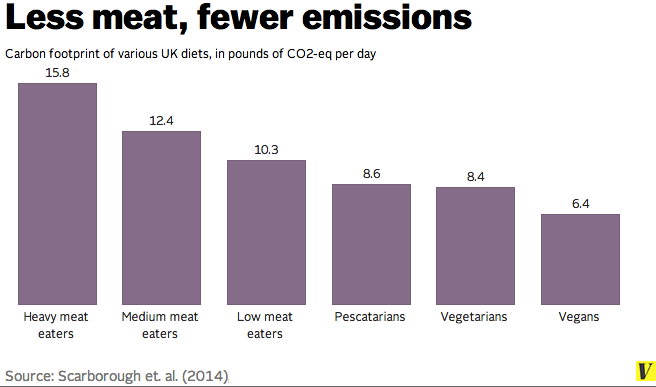 Food production is responsible for about 25 percent of the greenhouse-gas emissions heating up the planet. And scientists have long known that meat has a bigger climate footprint than fruits and vegetables do — partly because meat takes more energy to produce, but also because cows tend to burp up a lot of methane. (Cows, in turn, have a larger impact than pigs or chickens.)

That's why, last year, a US nutritional panel advised Americans to consider eating less meat for environmental reasons. "A diet higher in plant-based foods … and lower in calories and animal-based foods is more health promoting and is associated with less environmental impact than is the current US diet," the Dietary Guidelines Advisory Committee said.

Yet the panel didn't try to calculate the difference that eating less meat might actually make. That's where this study comes in.

In a 2014 paper, Peter Scarborough and his colleagues at Oxford University examined the actual diets of 29,589 meat eaters, 15,751 vegetarians, 8,123 pescatarians (that is, vegetarians who also ate fish), and 2,041 vegans aged 20-79 in the United Kingdom. They then calculated the greenhouse-gas emissions associated with the foods everyone ate. A few findings:

Vegans have the lightest footprint, but even eating less meat makes a difference

1) The average "high-meat" diet in Britain produced the equivalent of 15.8 pounds of carbon-dioxide per day. Notably, the study defines "high meat" as anything more than 3.5 ounces per day, or about one chicken breast. That's an awfully low bar (the average British person eats about twice that much meat), and people who eat more meat will have an even bigger footprint.

2) The average vegetarian diet, by contrast, produced the equivalent of about 8.4 pounds of carbon-dioxide per day — roughly half as much.

3) Vegan diets were even lighter, at 6.4 pounds of carbon-dioxide per day. That is, the average vegan diet's carbon footprint was about 60 percent lighter than the average diet heavy in meat.

4) There were a few surprises here. The average pescatarian diet (vegetarian plus some fish) was roughly as climate-friendly as the average vegetarian diet. The difference was only 2.5 percent.

A few caveats: This was only a survey of UK diets. American diets are likely different (the average American eats something like 12 ounces of meat per day, for one). Other surveys have suggested, however, that vegetarian diets in the US still have about half the carbon footprint that meat-heavy diets do.

What's more, this doesn't guarantee that going vegetarian will precisely halve your carbon emissions from food. It depends what you eat and how much you eat. Giving up chicken and replacing it with cheese, for example, could actually increase emissions at the margins, since cows have a bigger impact than chickens. This chart from the Environmental Working Group gives some idea of the climate impact of different foods:

But the study's bottom line is pretty clear: When looking at the eating habits of actual people, diets lighter in meat tend to have a significantly smaller footprint overall.

Small global shifts in meat eating could have a big impact

So what would happen if the entire world reduced its meat consumption? The impacts on global warming could actually be fairly significant — a difference of around 0.5°C or more.

I recently played around with this Global Calculator, which allows you to input a whole slew of scenarios and assumptions about energy, food, transportation, and farming to see how they'd affect future emissions and global warming (based on current climate modeling).

I first looked at the International Energy Agency's 4DS pathway, scenario which assumes that the world will make fairly ambitious changes in its energy system to reduce greenhouse gas emissions in the decades ahead. That puts us on track for roughly 3°C (or 5.4°F) of global warming by 2100 — still a steep increase.

Now, this scenario assumes that, by mid-century, the average person in the world will be eating 2,330 calories per day, including 220 calories of meat. It also assumes we'll be eating more beef — that is, about 25 percent of the world's meat will come from ruminants like cows, up from 22 percent today.

But what if we tweaked those assumptions? I told the calculator to assume that in 2050, the average person was only consuming 152 calories of meat per day — which is the WHO's target for a healthy diet. I also assumed that the mix of meat stayed similar to what it was today: less beef, more chicken and pork.

The result? Global greenhouse-gas emissions dropped significantly. The calculator said the world was now on pace for around 2.5°C of global warming by 2100, give or take:

Take IEAs 4DS scenario, and assume that people eat less meat (beef in particular). The world is now on pace for between 1.1°C and 3.8°C of warming. (Global Calculator)

We still haven't solved the climate problem. But we're getting closer. And that wasn't even asking everyone to become a vegetarian. Just eat less beef and stick to health guidelines for meat eating.

-- How to feed 3 billion extra people — without trashing the planet

-- How much of the world's cropland is actually used to grow food?

-- These maps show where all the world's cattle, chicken, and pigs live