Student loan interest rates just went up, and Congress is OK with that

Share All sharing options for: Student loan interest rates just went up, and Congress is OK with that

Student loan interest rates went up July 1 for the academic year that starts this fall. But unlike last year, there's no political uproar: Congress intended this to happen.

PLUS loans, which are available to parents and graduate students and don't limit how much they can borrow, are more expensive, as always. The rate for those loans will be 7.21 percent, up from 6.41 percent last year.

Congress knew this would happen, and doesn't plan to change it

The interest rates are going up because last year Congress voted to tie student loan interest rates to market rates. In the past, interest rates were set by Congress and didn't have much relation to what borrowers were paying for other loans.

This is just the beginning of annual interest rate increases, according to the Congressional Budget Office. The interest rate on 10-year Treasury notes, which determines student loan interest rates, is projected to rise: 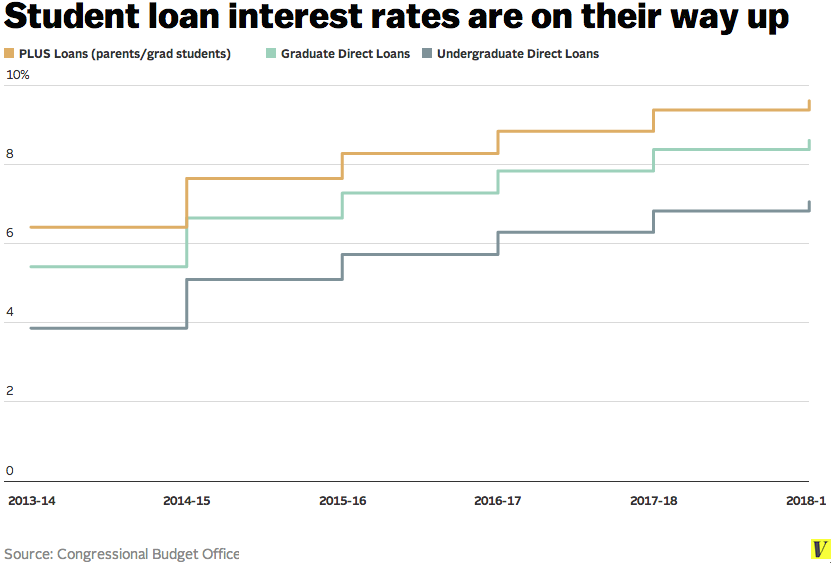 (The new interest rates actually came in slightly under these CBO projections, issued in May, but the overall trend still holds.)

Instead, the focus has shifted to helping borrowers who can't afford their monthly payments.

Student advocates want a lower interest rate for everyone up front. But unless annual interest rate increases become politically untenable, that doesn't seem likely to happen.