Share All sharing options for: HHS can't tell if all people getting Obamacare subsidies are supposed to be eligible

People who log into Healthcare.gov no longer face the technical glitches that plagued the site last fall. But persistent data problems on the back end could pose problems for insurers, enrollees, and the government agencies trying to implement Obamacare.

Between October and December 2013, states using Healthcare.gov experienced over 2.9 million inconsistencies between applications and information in the federal "data hub" that applications are supposed to be verified against, a new federal report found. State insurance exchanges are also still grappling with substantial technical challenges.

It's not clear how many enrollees are affected, because each applicant can have multiple inconsistencies. These inconsistencies also aren't evidence of fraud — one marketplace reported glitches where applications identified infants and young children as being incarcerated when, obviously, they are not.

The vast majority of inconsistencies were associated with citizenship status, income, and whether the applicant had access to affordable insurance through their employer (which would make him ineligible for subsidies). 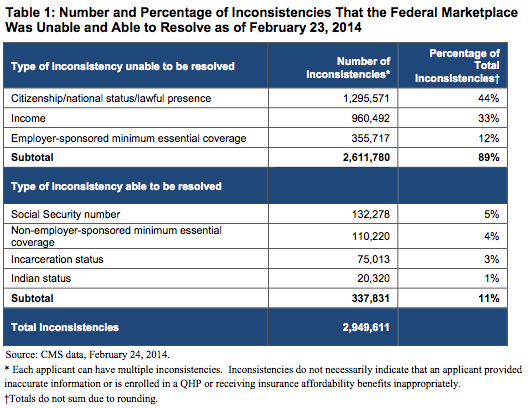 Legally-residing immigrants can receive subsidies to purchase insurance on the state exchanges, but undocumented residents cannot. Problems verifying citizenship status are the most prevalent issue that the federal marketplace experienced.

The next biggest issue is income, which determines the size of an applicant's insurance subsidy. If a person's income is unpredictable — say because his job has unstable hours or he holds multiple jobs — self-reported income might not match what the feds have on record, which would also cause inconsistencies.

According to the reports, the federal government was unable to resolve 87 percent of its inconsistencies by early 2014. The report recommends that the Department of Health and Human Services strengthen oversight and develop a public plan for resolving the inconsistencies.