The coming 50 years of economic problems, in 3 charts

Share All sharing options for: The coming 50 years of economic problems, in 3 charts

Everyone knows there's plenty of economic inequality worldwide. But it's about to get even worse, for decades on end, along with economic growth. There are a few reasons to feel pessimistic about the coming 50 years unless some serious policy changes are made, according to a report released Wednesday by the Organization for Economic Cooperation and Development.

Here's a rundown of the world's coming problems, in three charts:

1) Growth is going to slow down 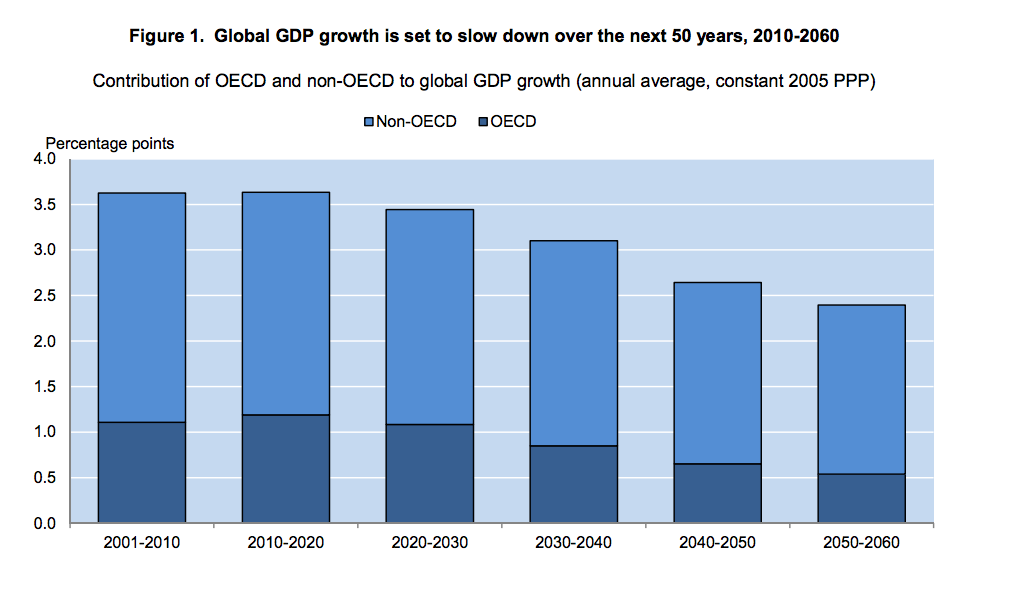 Global economic growth is set to slow way, way down after 2020, from a growth rate of around 3.6 percent to around 2.4 percent. A lot of that slowdown will come from OECD countries, which tend to be wealthier and developed (and which include the US and EU countries, among others).

Lots of factors contribute to this. In the nearer term, lingering effects of the financial crisis will continue to hurt economies for years to come, as low investment and high unemployment work their ways out of the system.

But beyond that, aging populations will drag down economic growth. While the OECD population is expected to grow by 17 percent through, the working-age population could fall by 7 percent. And in OECD and non-OECD nations, labor's contribution to GDP is expected to hold flat or fall, respectively. In addition, educational attainment is expected to slow down, meaning an already potentially smaller pool of labor will have a slower-growing pool of skills to draw from.

2) Climate change will play a part in dragging down growth

Ironically, the climate change brought about by economic growth is set to be a drag on the global economy for decades to come. By 2060, climate change will drag on GDP anywhere from 0.6 percent to nearly 2.5 percent, with by far the heaviest effects in southeastern Asia. By 2060, climate change could drag that area's GDP down by more than 5 percent. Those effects will come about largely for two reasons: how a shifting climate hurts the agriculture industry and how much rising sea levels shrink the world's available land.

The above chart shows the ratio of earnings of people at the 90th percentile of earnings to those at the 10th percentile. In all OECD countries, that ratio will grow substantially. Among these OECD countries, most of the new inequality will happen between the middle and top of the income distribution. That's an effect of job polarization — as technology replaces middle-skill jobs, the number of high- and low-income workers will only grow while the middle stagnates.

The problem is that some of the very policies that the OECD promotes for boosting global economic growth, like liberalizing trade, could serve to make inequality even worse. Studies have shown that when countries have more exposure to trade, a lower share of their income tends to go to labor. This could make for some hard choices — or the need for more redistributive policies — in many nations going forward.

On the positive side, earnings will grow for everyone, the report adds; it's just that they will grow much more quickly for richer people.

Correction: This article originally stated climate change would drag down the global GDP growth rate by 0.6 to 2.5 percent, rather than GDP itself.