The amazing diversity of languages around the world, in one map

Share All sharing options for: The amazing diversity of languages around the world, in one map

People on Earth speak thousands of different languages. But given the ubiquity of some languages, like English and Mandarin, it's easy to forget just how many there are around the planet. This map provides some great perspective.

Instead of representing each language, the map groups territory by which broader language family the dominant local language falls into. For instance, western and southern Europe are deep blue, because most locals speak one one of the Romance languages (like French, Spanish, and Italian) that descended from Latin. When you look globally, the diversity is dizzying:

Some areas are particularly rich. South America, for instance, looks like a work of modern art: it contains so many different language families that colors are splattered all over.

One last note: though the globe's linguistic diversity is impressive, it's shrinking. In 2011, David Harmon, a scholar who runs the Index of Linguistic Diversity, warned of a potential for linguistic "mass extinction" in the 21st century. Though there were 7,000 spoken languages in 2011, global linguistic diversity has been in decline. Only 80 percent of languages spoken in 1970 still existed by 2005: 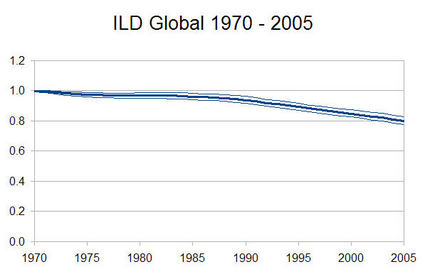 Harmon and his colleagues blame a confluence of forces for declining linguistic diversity, including "globalization, government policies that may favor certain official languages and actively or at least tacitly suppress smaller languages, economic pressures." So it's possible that, in the not-so-distant future, the maps above are going to start looking a lot more monochrome.