America is running out of farm workers. Will robots step in?

Share All sharing options for: America is running out of farm workers. Will robots step in?

The United States is likely to face a serious shortage of farm labor in the years ahead — especially as Mexico gets richer and sends fewer low-wage workers our way.

So what happens then? One option is that the United States could just grow fewer crops that need lots of workers to harvest. But that seems unlikely, given all the demand for fresh produce.

Another possibility is that robots could do more and more of our farming — particularly if the price of farm labor rises dramatically. Last October, the US Department of Agriculture handed out $4.5 million in grants for "robotics research." Projects included robots that could harvest strawberries or apples, as well as drones that can detect citrus diseases. Meanwhile, private companies are developing machines that can pluck oranges or whack weeds with minimal supervision.

It's too soon to tell how many of these robots will actually pan out or be cost-effective. But automated farming is popping up in surprising places. Aviva Rutkin of New Scientist reports that Hackney Nursery in northern Florida recently hired four HV1000 robots that move perennials around the nursery autonomously, giving the plants more space to grow. At least 20 nurseries nationwide have hired these robots to do jobs once done by migrant workers:

So is this the future? Here's a rundown of why America's running out of farmworkers — and whether robots will help fill the gap.

Why America is running out of farmworkers

Technically, the United States first began running out of farmworkers back in the 1950s, at which point most Americans had left the farms for other sectors. At the time, however, we had a ready solution — more low-wage agricultural labor from Mexico.

Mexico is getting richer, and its pool of available farm labor is shrinking

Those immigrants helped stave off a farm crisis for several decades. By 2006, 77 percent of all agricultural workers in the United States were foreign-born (and about half of those were undocumented). Low-wage workers from abroad helped keep US food prices cheap — particularly for labor-intensive fruits and vegetables.

But that's all starting to change. Mexico is getting richer, which means that its pool of rural agricultural labor is shrinking. A 2012 paper by UC Davis agricultural economist Edward Taylor and colleagues found that many Mexican workers were shifting into other sectors like construction — and Mexican farms were now raising their own wages.

Add it all up, and Taylor's research suggests that American farms will have to pay more and more to attract a shrinking pool of farm labor in the years ahead: 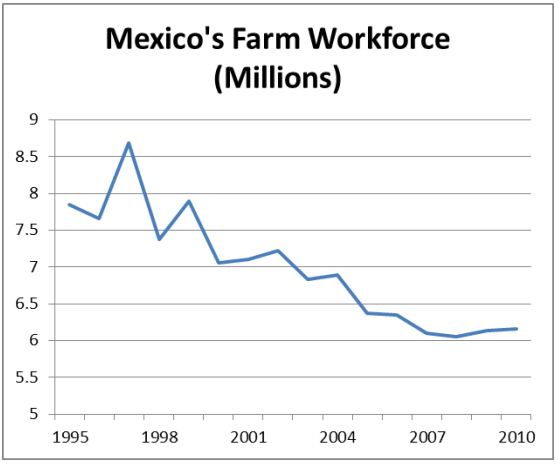 What's more, the paper noted, it's unlikely that America will be able to find ready replacements of farmworkers. Most native-born Americans don't seem to have much interest in going back to the farm, even if wages rise significantly. And poorer countries like Guatemala or El Salvador are either too small or urbanizing too rapidly to supplant Mexico in providing low-wage farm labor.

Washington is facing its biggest shortage of farm labor

Combine that with stricter immigration enforcement in recent years, and America's already starting to see the effects. In 2012, California faced one of its worst agricultural labor shortages ever. This year, Washington is suffering its largest shortage of seasonal farmworkers on record. (Georgia, for its part, has tried to use prison inmates to replace lost farm labor after enacting stricter immigration laws — and it's gone poorly.)

US farm groups have been trying to fend off doomsday by pushing for immigration bills that would boost the supply of migrant farmworkers. But in an interview last year, Taylor told me he didn't think this plan would work in the long run. "The idea that you can design a guest-worker program or any other immigration policy to solve this farm labor problem isn't realistic," he said. "It assumes that there's a willingness to keep doing farm work on the other side of the border. And that's already dropping off."

So that leaves two options. Either the United States shifts away from labor-intensive crops — like citrus or berries. Or we turn things over to the robots.

The rise of robot farming 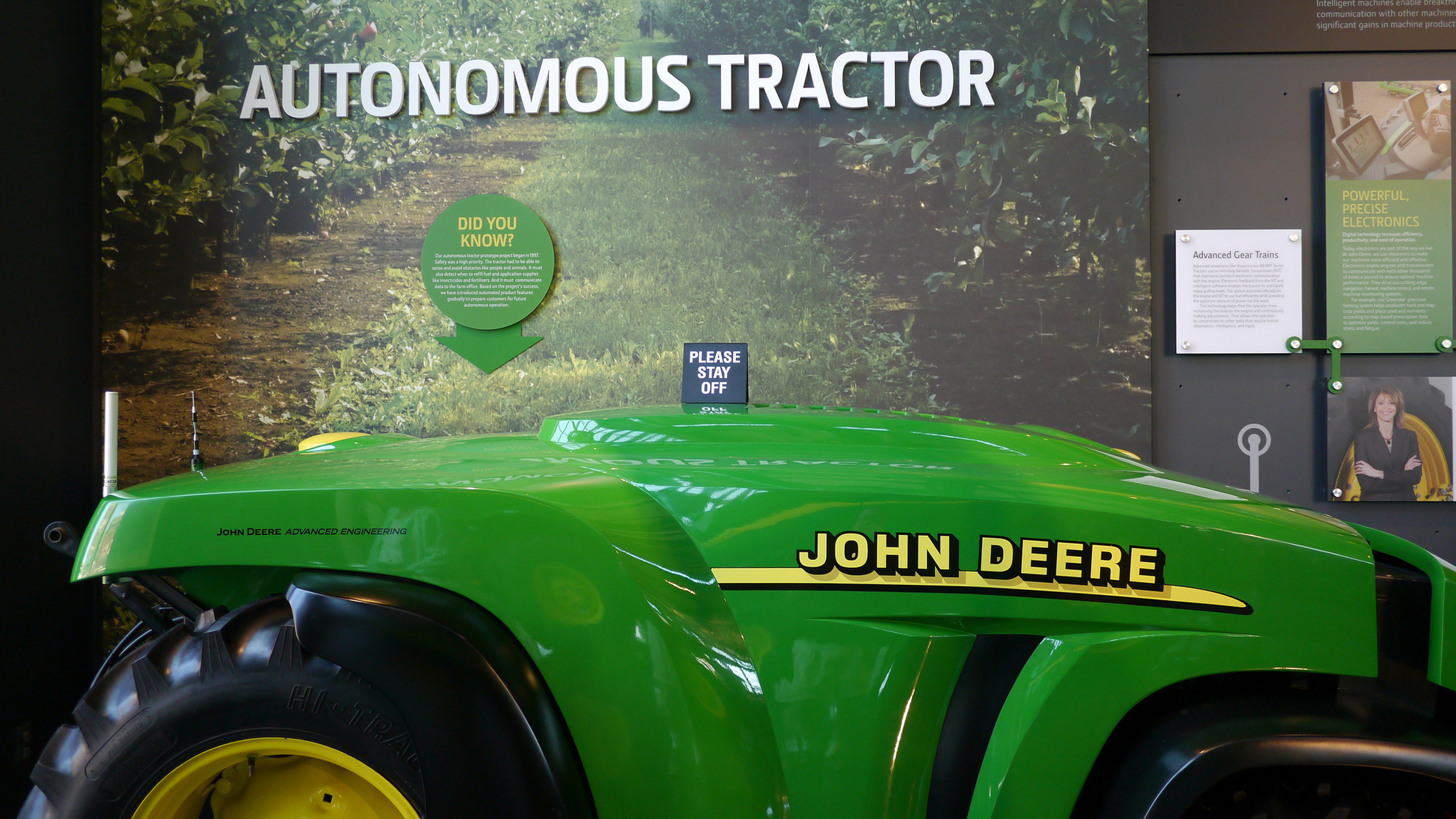 Labor-saving techniques have been a mainstay of agriculture since the very beginning. Farmers have always tried to do more with less. To take one example: The recent growth of "no-till farming," which involves less plowing and more herbicides to kill weeds, has reduced demand for labor on some farms.

Robots will have to do more — from weeding to picking apples

But if a massive farmworker shortage really is on the way in the decades ahead, those labor-saving techniques will have to have to expand massively.

Enter the machines. In recent years, companies have been developing driverless tractors guided by GPS. Or drones that can monitor plant health from afar. Or sensors that can automatically figure out where fields need water. Or fully autonomous cow milkers.

In Australia, there are even robots that herd cows and sheep around:

Robots are slowly expanding into other areas, too. Blue River Technology is developing a robot that uses sensors and algorithms to identify weeds and pluck them. In 2012, the company unveiled a prototype that can thin out lettuce crops in order to give the remaining plants room to grow — a task that usually requires dozens of workers.

some experts don't think farm robots will be ready for decades

Fruit-picking is another area where robots could make a real difference. New Scientist notes that the state of Washington produces 17 billion apples each year — each one plucked by a human hand. A labor shortage would threaten that harvest. So a research team at Washington State University is spending the next five years developing a robot to do the job.

That said, there are certainly skeptics. At the Oxford Farming Conference in the United Kingdom in January, some experts argued that many existing ideas for agricultural robots would take decades to catch on — if at all. A lot will depend on how quickly the price of human labor rises and how fast the price of machines falls.

But if they do catch on, how would this shake out economically? In a 2012 presentation, Taylor and his colleague Diane Charlton looked at the lessons from "shake-and-catch" machines that surround a tree and shake out the fruits or nuts into a large basket. Whenever these machines have been adopted, they note, they typically displace large numbers of low-skilled foreign workers with a few native-born workers with high-school or college degrees.

That suggests that a larger-scale shift to farm robots could be a boon to domestic farm workers (studies have found that 23 percent of US farm worker families are below the poverty line). But Taylor and Charlton noted that a shift to robot farmers would likely have other effects as well. The US may see increased demand for higher-skilled agricultural laborers from abroad, for instance.