Discrimination against gay, lesbian, and transgender workers appears to be very much alive among some federal contractors.

Better qualified LGBT applicants are 23 percent less likely to get a call back from some federal contractors than applicants who don't openly identify as LGBT, according to a new study from Freedom to Work and the Equal Rights Center.

One resume noted a leadership role in an LGBT organization, while the other did not. The LGBT resume always included stronger credentials, particularly a higher grade point average and stronger work experience.

Despite the stronger qualifications, the LGBT applicant was much less likely to get called back. The study showed one example of the application process through ExxonMobil, the largest federal contractor to not include LGBT protections in its policies: 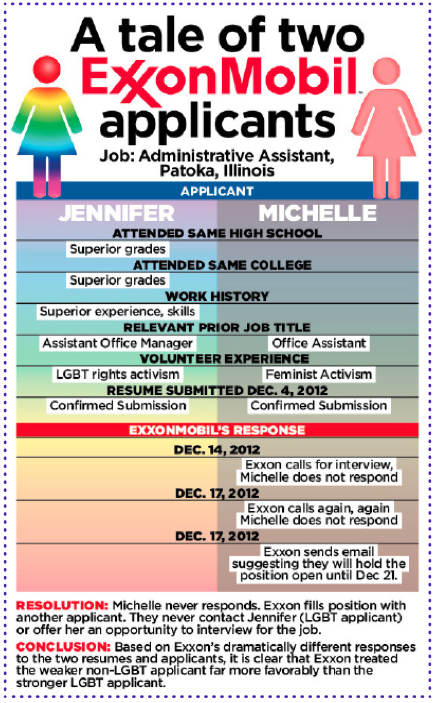 As the example shows, the LGBT applicant had clearly better qualifications. The LGBT applicant, however, received no calls. The non-LGBT applicant, meanwhile, got two calls and an email, and ExxonMobil even offered to hold the position open for four days after the last point of contact.

The White House in June announced an executive order that will seek to protect the LGBT employees of federal contractors. The order is meant to prevent cases like the ones found in this study, and forbid employers from firing workers over their sexual orientation or gender identity.

Among the federal contractors that are also Fortune 100 companies, the Human Rights Campaign found 95 percent already protect gay and lesbian workers and 61 percent prohibit discrimination based on gender identity. But there are some exceptions: Berkshire Hathaway, CHS, and ExxonMobil don't have any LGBT protections, and Abbott Laboratories, Archer Daniels Midland, ConocoPhillips, Deere and Company, Hess Corporation, Johnson Controls, Sysco, Tesoro, Tyson Foods, and Valero Energy have no protections for gender identity.