Doctors get due dates wrong 96.6 percent of the time

Share All sharing options for: Doctors get due dates wrong 96.6 percent of the time

If and when you happen to get pregnant, your doctor will likely give you a date for when to expect your newborn to arrive. Your obstetrician will likely, knowing or unknowingly, rely on data done by a 19th century German physician, and estimate your baby will be born 40 weeks after conception.

And, it turns out, your doctor will near certainly be wrong.

Only 3.5 percent give birth 40 weeks after conception, according to Brookings Institute researcher Matt Chingos, who is the force behind the new site whentoexpect.com. That works out to about one in every 30 women having their baby on the date they were told to expect the arrival.

The most likely birth date is actually seven days prior to the traditional 40-week estimate; that's when about 4.4 percent of babies are born. You can see that in this chart of Chingos' data that the Boston Globe created. 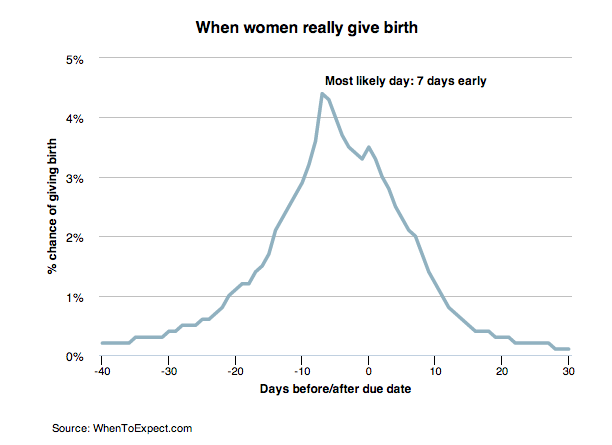 Chingos' estimates rely on Centers for Disease Control data on the millions born between 2006 and 2010. And it shows that length of pregnancy works out to be something like a bell curve, with a wide variation between different women in terms of gestation period.

Keep in mind, this chart doesn't necessarily suggest that most women will give birth seven days before the traditional due date. Instead, it shows that 4.4 percent of women will give birth at that moment, which is a higher percentage (but certainly not a majority) of any other days in the two-month range.

Separate research has shown that women's gestation periods tend to vary naturally by as much as five weeks. That study, conducted by the National Institute of Environmental Health Sciences, has similarly shown that just about 4 percent of women give birth on their due date, while 70 percent have their baby within 10 days of the predicted arrival.

In other words: the uterus is not a crystal ball, despite our best attempts to use it to see the future.