The painful, mosquito-borne chikungunya virus has reached the US

Share All sharing options for: The painful, mosquito-borne chikungunya virus has reached the US

A virus called chikungunya, which is transmitted by mosquitoes, has been an epidemic in the Caribbean in recent months. And this week, officials reported the first cases of people getting it on US soil.

The disease is rarely lethal, but causes fever and joint pain. Sometimes that pain can last for quite a while. And the virus's recent, fast spread to the Western Hemisphere has public health experts concerned.

Here's what you need to know.

What kind of a name is chikungunya?

First of all, this has nothing to do with chickens. The name comes from the Kimakonde language, which is spoken in Tanzania, where the disease was first identified in 1952. It roughly means "to become contorted," because it can cause arthritis-type pain that makes people hunch over. (Usually, such pain is temporary.) It's pronounced chickun (sort of like the bird) GUN (like the weapon) yuh. Here's an audio clip of how to say it.

Where did chikungunya come from? 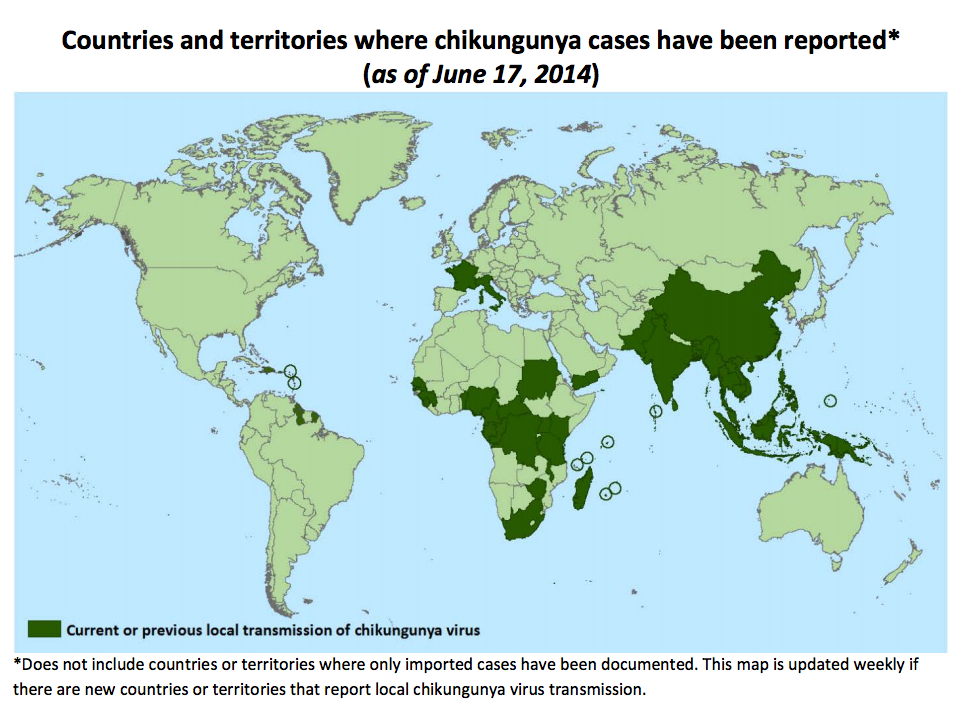 Chikungunya has been around for hundreds of years and has hit up dozens of countries. By this point, it's in a whole lot of places, and all of those places have mosquitoes.

Some notable recent outbreaks have occurred in south and southeast Asia. Since 2005, there have been more than 1.9 million cases in those areas, according to the World Health Organization. And in 2007, an outbreak in Italy had almost 200 cases. Then, in the winter of 2013, an outbreak started in the Caribbean, producing 355,617 infections as of mid-July.

Who has chikungunya in the US?

Two people have gotten it from mosquitoes in southern Florida, according to the state's health department. The CDC has confirmed one of those cases.

In addition, as of July 17, the CDC has counted 243 cases of people getting the disease elsewhere and then coming to the US. This is a dramatic uptick from recent years. From 2006 to 2013, the average number of such cases was 28 and the highest was 65.

What does chikungunya do to people?

Chikungunya can be painful and sometimes long, but it's rarely fatal. The most common symptoms are fever and severe joint pain. These symptoms usually disappear on their own within a few days or a week. However, about 20 percent of patients still have some joint pain a year later. The silver lining: once you've had chikungunya, it seems that you can't get it again.

The death rate in reported cases is quite low, about 1 in 1,000. (This is one of the things that makes it different from a closely related virus that causes dengue.) Deaths are mostly among the young, elderly, and people who are already ill from something else.

How can the disease be prevented?

Right now, preventing chikungunya in an area that has the disease is pretty much the same as preventing mosquito bites. So Florida is recommending that its residents use standard mosquito control practices, like emptying standing water in backyards and using insect repellent, to stop the disease from spreading.

Although several vaccines are currently being studied to prevent chikungunya, they are too early in development to help out right now.

How far could it spread in the US?

Chikungunya's possible range is as far as the ranges of the yellow fever mosquito, (Aedes aegypti) and the Asian tiger mosquito (Aedes albopictus), which is a recent invasive species with a larger range here.

The rough ranges of the Asian tiger mosquito, Aedes albopictus. Dark blue represents its native habitat. Green represents where it has invaded. (Gancho via Wikimedia Commons)

How bad will chikungunya get in the US?

It's currently unclear. It's likely that there will be more cases. However, there are several reasons to believe that chikungunya won't get as bad here as it has been in some other places.

As the CDC has pointed out, more than 200 people have brought a case of chikungunya back to the US from 2006 to 2013. None have resulted in outbreaks. No one knows for sure, but air conditioning is probably a big factor. Americans spend a lot of time indoors, away from the (mostly) outdoor hazards of mosquitoes.

So most Americans probably don't have to worry unless they're traveling. And other than that, we'll all just have to wait and see.