Map: Over a dozen states ban car sales on Sunday

Share All sharing options for: Map: Over a dozen states ban car sales on Sunday

There are a lot of odd rules around car dealerships in the United States, often in the news lately because of various fights about Tesla, and one of them is that in many states you can't sell a car on Sunday.

Here, courtesy of Briana Bierschbach, is a map illustrating which states adhere to this timeless Biblical precept: 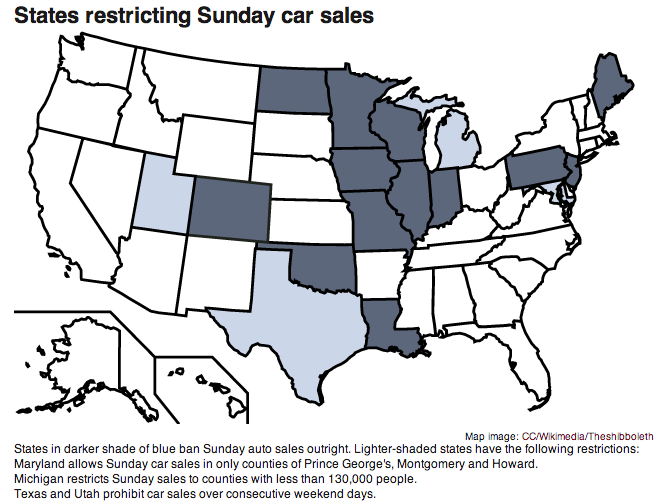 The regional distribution here looks pretty random, but the economics of these kind of arrangements are interesting. Obviously any given auto dealer who refused to open on Sunday would be putting himself at a competitive disadvantage. But since cars aren't exactly impulse purchases, if you prevent all dealers from selling on Sunday you don't depress overall auto sales. Instead, car-buyers are mildly inconvenienced while dealership owners save money because they don't need to stay open as long.

Of course in theory the dealers could push that idea even further and go for a law saying you can only sell cars on a Wednesday. But presumably state legislatures wouldn't go for that. A little Christian observance works, though.