A common theory for why arriving at a peaceful settlement in Israel and Palestine is so difficult is that each violent provocation tends to promote hawks on the other side. That makes intuitive sense, but in the Israeli case at least, there's solid social science to back it up. According to new political science research, when Palestinian groups in Gaza launch rockets into Israel, Israeli popular support for right-wing parties spikes in affected areas, even though such attacks are rarely lethal.

In a forthcoming article in the American Political Science Review (which they summarize at The Monkey Cage here), Interdisciplinary Center Herzliya's Anna Getmansky and American University's Thomas Zeitzoff find that "the effect of being in the rockets’ range is an increase of 2 to 6 percentage points in the right-wing vote-share" in the affected areas. This effect isn't present for right-wing parties as a whole when they're in power. But Likud specifically, which is the largest conservative party and the head of the current governing coalition, gains 2 percentage points in the affected area regardless of whether or not it's in power. Likud is Prime Minister Benjamin Netanyahu's party.

the average Palestinian holds more radical positions immediately after a Palestinian fatality in their district of residence ... This effect is temporary and vanishes completely within 90 days

Because the rockets' ranges have grown considerably over time, the importance of this effect has been growing. In 2003, only about 1 percent of Israel's population was in rocket attack range. By 2009, around 14 percent was: 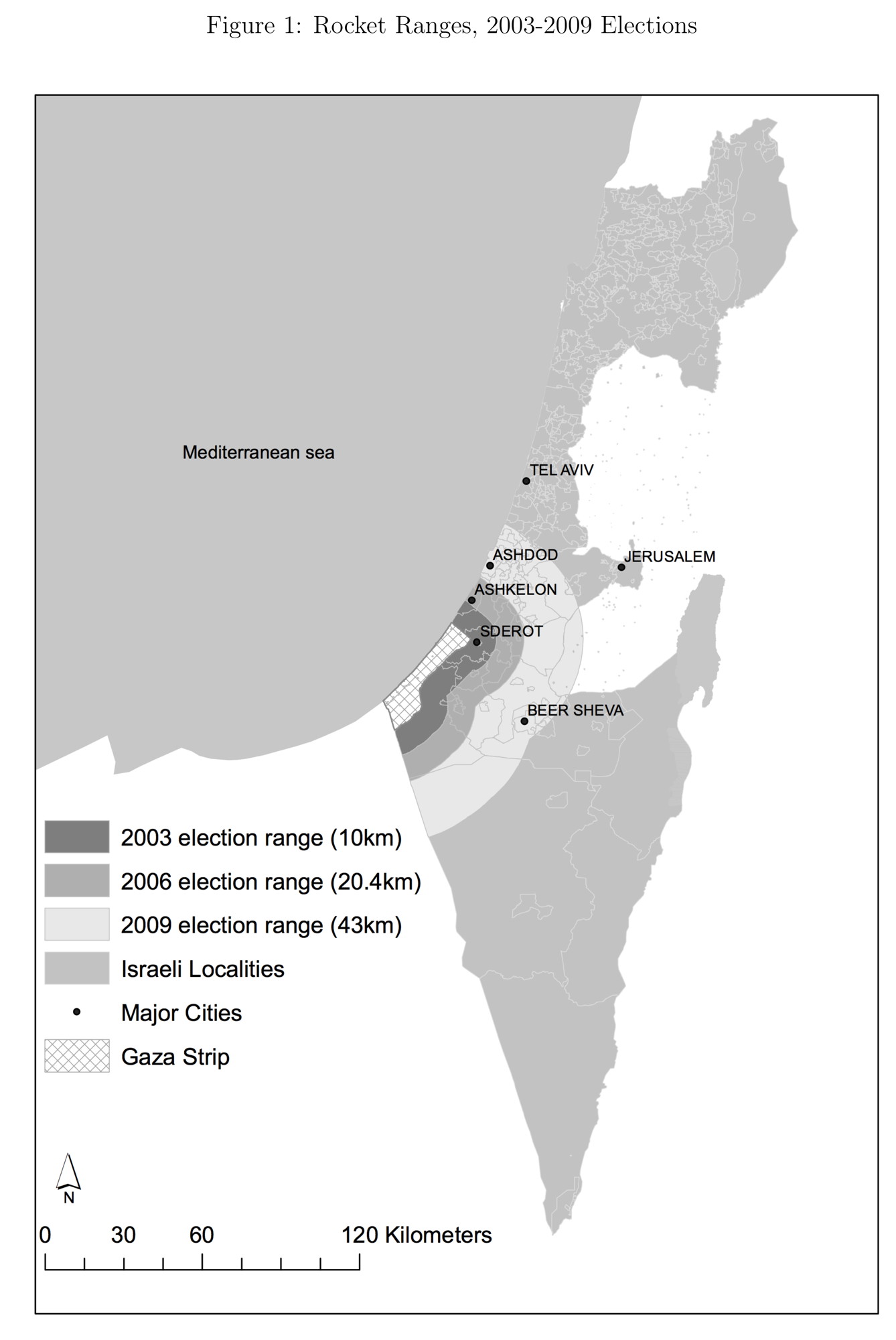 The range has grown even more since then; a number have flown near Tel Aviv since the latest fighting began. Given that rocket strikes are frequent but most don't result in fatality of injury, Getmansky and Zeitzoff conclude that "experiencing an attack is not necessary to influence voting, and … voting could be also affected by the mere threat of being a target."

Prior research on the topic by economists at Hebrew University has suggested that Palestinian suicide terrorism increases support for right-wing parties. A 2008 paper by Claude Berrebi and Esteban Klor found that "the occurrence of a terror attack in a given locality within three months of the elections causes an increase of 1.35 percentage points on that locality’s support for the right bloc of political parties out of the two blocs vote."

However, a 2010 paper by Klor and Eric Gould complicates the research. It found that while suicide attacks increase support for right-wing parties, they also spur those parties to move to the left on the issue, and that the sum effect is to "move the Israeli electorate towards a more accommodating stance regarding the political objectives of the Palestinians." A big caveat is in order, though. That study tracked opinion and voting patterns from 1988 to 2006, which is an inauspicious year to conclude. That's before Hamas battled Fatah to take over Gaza in 2007, before the Israel-Gaza wars in late 2008-2009 and November 2012, and before the current conflict. While the moderating effect of attacks may have held up until 2014, it's hard to argue that attacks during Netanyahu's current premiership have lead him to soften his stance much.

Interestingly, the effect of Israeli violence — which has resulted in dramatically more casualties than Palestinian violence has over the course of the conflict — on Palestinian public opinion seems to be more subtle. There are some signs of a similar dynamic at work; in 2009, support for Hamas among Palestinians grew considerably following Israel's attack on Gaza in late 2008-2009, which produced huge numbers of Palestinian casualties. But a study by Klor, CUNY's David Jaeger, Tel Aviv University's Sami Miaari, and the Boston University's Daniele Paserman found that while "the average member of the Palestinian population holds more radical positions immediately after the occurrence of a Palestinian fatality in their district of residence … This effect is temporary and vanishes completely within 90 days. As a consequence, the overall effect of Palestinian fatalities is not statistically significant."

The researchers do find evidence that Palestinian views of the conflict are affected by the era in which they grew up; those who came of age during the First Intifada of the late 1980s, which saw largely non-violent Palestinian resistance violently put down by the Israeli military, hold less conciliatory views than those who came of age during the Oslo Peace Process of the mid-1990s, for example. But it's interesting that political backlash to attacks is easier to detect among Israelis than it is among Palestinians.