Share All sharing options for: New comedies 'Married' and 'You’re the Worst' explore the nonexistent line between love and hate

If FX's new comedies Married and You're the Worst — debuting tonight at 10 and 10:30 p.m. Eastern, respectively — are any indication, you're just better off not falling in love. Love is only going to result in a slow-building co-dependency, but it might just leech away your very soul. Both of these shows are dark, dark comedies. And yet there's something weirdly hopeful about their view of human relationships and romance. Maybe there's somebody out there, even for the worst of us.

Of the two, Married is both harder to take and a better show, ultimately. It stars Judy Greer and Nat Faxon, two actors who've made long careers of being the funny supporting players in other characters' stories, as long-time married couple Russ and Lina Bowman. Russ and Lina have three daughters and far too little cash. They almost never have sex, and when Russ raises this as an issue in the pilot, Lina suggests that, hey, maybe he should just go get that taken care of with someone else. She won't mind.

This has been derided by some critics as both unrealistic and unsympathetic. That critique extends to the way the two treat each other, which is with a kind of snarky cruelty that buries the small kernels of affection the two have for each other very deeply. It's brutal enough that it's easy to miss the way that, say, Lina awakens Russ from a night on the couch with a mug full of coffee as a way of apologizing for failing to find his seduction methods the night before appropriately arousing.

Yet what I think this criticism misses is how the situation in the pilot (with Lina telling Russ he can find a mistress, if he wants), and so many of the characters' interactions, together suggest a kind of model for how marriage necessarily has to work in a world where time is limited and budgets are stretched thin. The most important part of being married, in the world of Married, isn't knowing how best to support your partner. It's knowing how you can't support your partner and realizing your own limitations. Only then can you work with them to figure out the compromises necessary in any relationship.

Russ and Lina have been married since their early 20s. In one sense, all they know is each other. That might mean they're unnecessarily cruel to each other, but it also means their bond has been tested by just about everything and is strong enough to survive anything, possibly even including infidelity.

The actual sequence in which Russ tries to find a mistress seems a little too unknowingly tinged with weird racial and class politics, but it also allows into the show Jenny Slate and Brett Gelman as Jess, a young woman married to a much older man, and A.J., a man getting over a terrible divorce. The two suggest a kind of compare-contrast with Russ and Lina's blissfully dysfunctional co-dependence. Russ and Lina may snark endlessly at each other, but over the first four episodes of the show, their love for each other seems as genuine and deeply felt as any love on TV.

Married is far from perfect. It's much too shaggy in its storytelling, particularly in the pilot, which wanders all over the place. Its dark view of a beloved institution won't be for everyone. And while it can be very funny, it seems occasionally unaware that it's almost stronger as a drama about a couple struggling to make ends meet. But creator Andrew Gurland and his cast have come up with a show that has a fuzzy but distinct core. It's a point-of-view on modern marriage that isn't widely spread on television, and if it's taking a while to figure out what it wants to be beyond that, a good center and a good cast count for a lot. 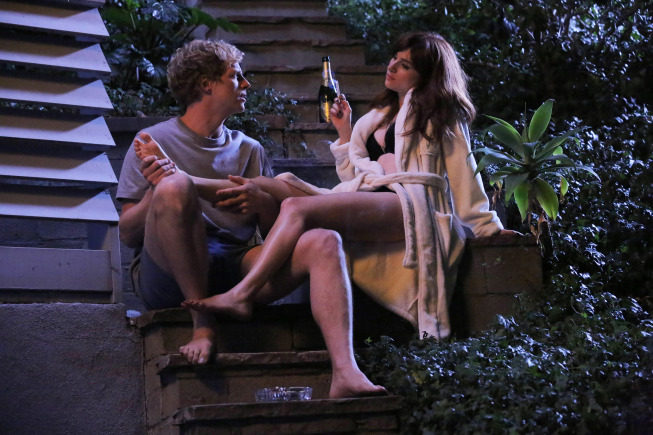 Chris Geere and Aya Cash of You're the Worst

Meanwhile, Married's time-slot companion You're the Worst is a chance to see where couples like Russ and Lina's come from. Created by Stephen Falk, a writer on Weeds and Orange is the New Black, the show traces the course of a relationship between two largely reprehensible people, who realize in each other a kind of kindred spirit, even if the thought of that might make them break out in hives.

Starring Chris Geere as Jimmy and Aya Cash as Gretchen, the show has its two love-hatebirds meet at a wedding, hook up for the night, then find there might be something more than a one-night stand between them. What's fascinating and a bit enervating about Worst is the way that Falk walks the two through all of the old romantic comedy clichés but with an acid tinge of absolute hatred and loathing. Jimmy's generalized anger toward all of the human race is turned inward as often as it is outward, while Gretchen might be slightly better socially adjusted than Jimmy but still possesses a deep, dark self-destructive streak.

Yet by clinging to those romantic comedy clichés, Falk also manages to play viewers' expectations against themselves. There's really no good reason for these two to attempt a relationship, but the demands of the format say they must. At the same time, so much of what makes the two characters funny is just how terrible they are as people, which means that at all times, we're actively rooting for the process of love not to soften them. It's a tricky balancing act, but it's one that mostly works in the two episodes sent out to critics.

You're the Worst also captures a sleepy Los Angeles vibe that doesn't always translate to rapid-fire humor but kicks in nicely by the end of the pilot (in which director Jordan Vogt-Roberts pulls off some solid work with a split-screen image holding Jimmy in one half and Gretchen in the other). The opening scene of episode two is the funniest thing in either of these shows, and Falk has a real talent for finding a way to undermine the moment when, say, the two lovers say the same thing at the same time and realize they're meant for each other by making the thing they're both saying truly awful.

Again, this isn't a perfect show, but somewhere inside of it is something great just waiting to emerge. Both Married and Worst have huge upsides if FX, which loves its edgy comedies, and their creative teams can find the way to the best versions of themselves. The question now is if all involved can convince the audience that sometimes, the best form of love is really hate, and vice versa.