Malaysia Airlines' troubled business is going to get even worse

Share All sharing options for: Malaysia Airlines' troubled business is going to get even worse

Today's crash over Ukraine is obviously bad news for Malaysia Airlines. They're offering 100 percent refunds for anyone who wants to cancel a ticket and their business already took a beating over the (apparently unrelated) disappearance of Malaysia Airlines Flight 370. Their traffic fell 4 percent in May, and the stock is down about 27 percent on the year so far. 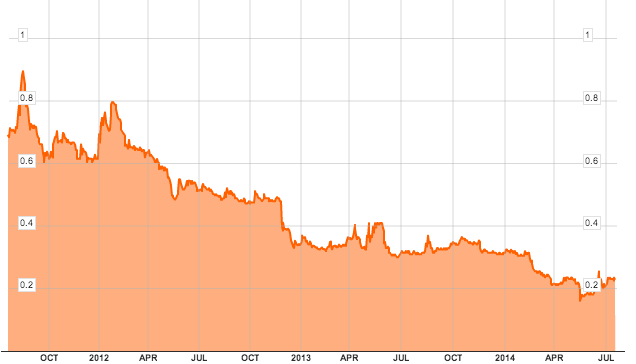 That said, the financial problems at the airline are actually so big and longstanding that it's difficult to lay the blame for its problems at the feet of these tragedies. As you can see above, the share price has been sliding consistently for three years.

Malaysia Airlines was profitable back in 2007 through 2010, but posted a record loss in 2011 and began cutting back service in response. Their key problem has been the rise of new low-cost carriers in Southeast Asia, and especially the growth of Air Asia which is based in Malaysia and directly competes with Malaysia Airlines.

In the United States, the growth of low-cost competitors put many airlines (PanAm, TWA) out of business or forced them into mergers. But Malaysia is mostly owned by a government-controlled investment fund, so it's in no direct danger of going out of business. Almost exactly one month ago, rumors surfaced that the government was going to work out a deal with Etihad Airlines out of the United Arab Emirates which briefly sent Malaysia's stock soaring. Etihad has operated as an investor in a number of distressed European airlines, but nothing seems to have come of the talks — if there were any talks — so far.

But with more trouble for the already-troubled airline, Kuala Lumpur is likely only going to grow more desperate to find a new way forward for its flag carrier.