Share All sharing options for: The MH17 crash comes as the US is imposing big sanctions on Russia over Ukraine

On Thursday, Malaysia Airlines flight MH17 crashed in eastern Ukraine, raising tensions in the ongoing Ukraine crisis as rumors circulated that rebels may have shot the plane down. While there is no clear connection yet and those rumors may turn out to be false, the Ukraine crisis was already entering a new stage of escalation. The day before the crash, the Obama administration had imposed a slate of new sanctions on the Russian economy to punish it for its support for separatist rebels. In the morning, even before the crash, the Moscow Exchange plummeted: 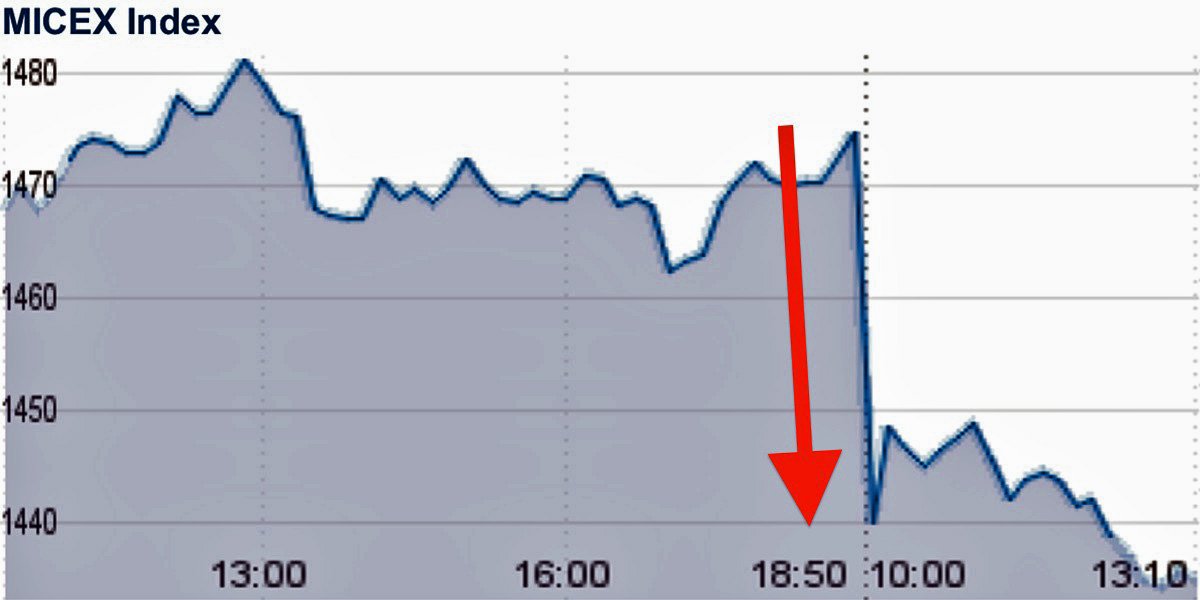 But why, after the US has imposed a number of sanctions before, are the markets responding now? And why is the US imposing these new sanctions? Here are a few answers.

These sanctions are different in kind from the ones before them

The New Republic's Julia Ioffe has the clearest and best explanation of how the new sanctions work. As Ioffe explains, there are two kinds of sanctions in the new package. First, the US hit high-level Russian officials and defense companies with traditional sanctions: it froze their assets and prohibited companies from doing business with them. The defense companies, including the famous Kalashnikov, were notable, but this type of sanction is basically an extension of the current US strategy. 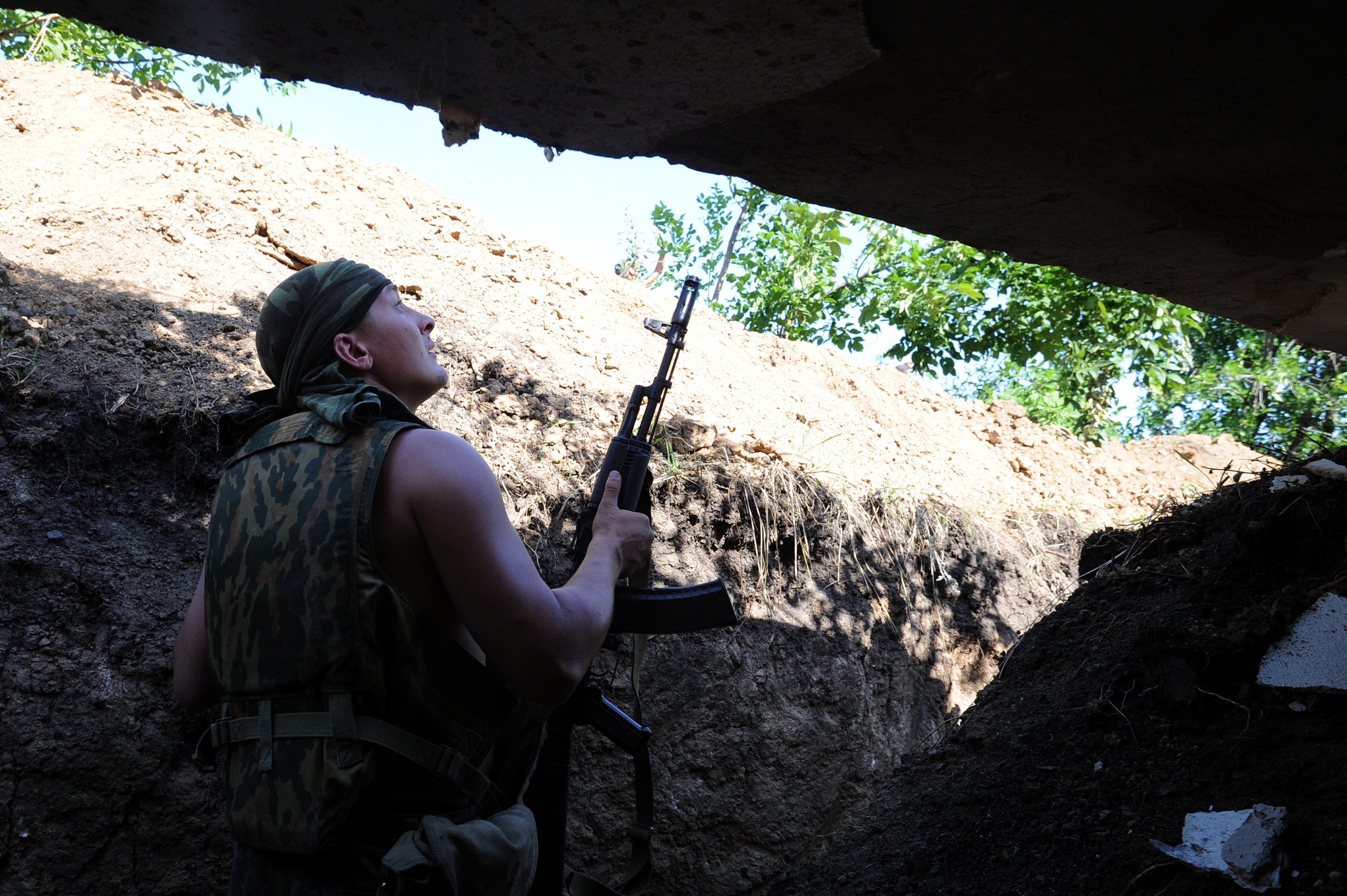 What's new about the US sanctions was the introduction of something called "sectoral" sanctions. These targeted core, huge sections of the Russian economy: most notably oil/gas and banking. Russia's massive state-run oil company, Rosneft, and largest independent gas producer, Novatek, were both hit. Two big banks, Gazprombank and VEB, also got hit. These sanctions don't freeze assets or prohibit any business; rather, they prohibit any new deals with these companies and prevent banks from holding their debt for more than 90 days.

The new sanctions bite Russia a lot harder, but still aren't as strong as they could be

This is a very big deal. Expert estimates suggest between 17 and 25 percent of Russia's GDP comes from oil and gas, so limiting business opportunities abroad is painful. Russian banks have a serious problem raising domestic capital, so curtailing their access to foreign money seriously crimps their ability to make loans and do business. And the sanctions will affect both US and EU companies, because "every Western business is ultimately forced to comply with the Securities and Exchange Commission/U.S. Treasury Department/[Office of Foreign Assets Control]," Timothy Ash, an analyst at London's Standard Bank, writes. The EU is easily Russia's most important trading partner.

Moreover, the effects of the sanctions could semi-permanently unsettle Russian markets. "Through these actions the US administration has sent a very clear signal to US and Western investors that they need to think long and hard over having exposure to Russia," according to Ash. "Risk management teams and investors are likely to dump Russian assets first, rather than be caught further down the line with sanctioned Russian assets on their balance sheets."

Mark Adomanis, a University of Pennsylvania graduate student who watches Russian sanctions closely, thinks the sanctions aren't as bad as they could have been. "They lack the severity and scope that we were previously told sectoral sanctions would have," he writes via email. That said, "these sanctions definitely have some sting to them, and they've positively infuriated the Russians."

So the sanctions are pretty painful, but they aren't going to nuke the Russian economy. What's the point of imposing them now?

"If the Russians respond aggressively the situation could escalate very quickly"

"I'd assume it's the blatant transfer of Russian weapons to the rebels," Dan Drezner, a professor at Tufts' Fletcher School and an expert on sanctions, said. Indeed, Russia has been openly dumping weapons — including tanks and rocket launchers — into East Ukraine. That's because the Ukrainian military had been slowly getting the upper hand over the Russian-backed separatists, including retaking two major rebel-held cities, Slovyansk and Kramatorsk, in early July.

An anonymous administration official confirmed Drezner's suspicion — that this was a signal to the Russians to back off — to Ioffe. "The Russians were reacting to the fall of Slovyansk and Kramatorsk by increasing military pressure," the official said. "That's not cost-free. We said so and we meant it."

It's not apparent whether this will work. In the past, US economic pressure appears to have induced Russia to (at least temporarily) back down in Ukraine. Adomanis isn't sure it'll be the same this time around. "Moscow has promised to retaliate, but it's not yet clear how it does that," he writes. "Options range from getting more involved in supporting the separatists in Eastern Ukraine all the way to responding with (purely symbolic) visa bans against high-ranking Americans."

"If the Russians respond aggressively, the situation could escalate very quickly, and you'd see even more aggressive sanctions from the US," he concludes.