Why the White House thinks people aren't looking for work

Share All sharing options for: Why the White House thinks people aren't looking for work

The White House's Council on Economic Advisors is out today with a new report detailing what they think is going on with America's declining labor force participation rate. The somewhat unsatisfying conclusion is summed up here: 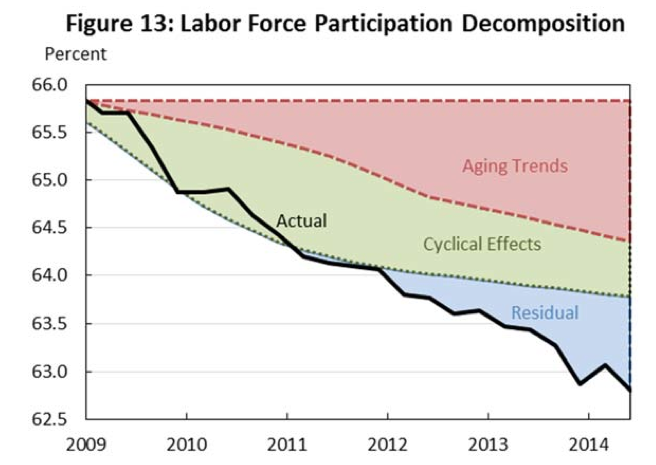 Using statistical techniques, they are able to decompose Americans' increasing disinclination to work into population aging (old people don't work much) and business cycle impacts (people don't look for work when nobody can get jobs) and find that these two account for most of it. But since early 2012 there has been a growing quantity of non-participation (the residual) that is not predicted by either of those statistical factors.

As a pure econometric exercise, getting better at estimating the size of the residual — it's about a sixth of the total — is important and interesting.

But as a citizen, what one really wants to know is what's the deal with the residual. The paper discusses several possible factors but doesn't really answer the question. One issue is that America's relatively family-unfriendly policy framework seems to keep prime-age women out of the labor force compared to what you see in France or Sweden. Another issue is that the very large number of long-term unemployed people may simply be leading more workers to abandon hope than simple extrapolation from past recessions would suggest. A third issue is that the share of students who are also working on the side is in decline. But these last two might be related, and might be cyclical or structural, and basically we don't really know what's going on.