Billionaire venture capitalist Tim Draper's plan to break up California into six separate states is coming in for a great deal of mockery, not least because Draper's stated reasons for wanting six Californias are pretty vague. The scorn is misplaced. Draper may or may not know what he wants here, but the case for splitting up states is very strong.

The basic case is that the US Senate exists, and it's horrible. Whereas most developed countries have dramatically weakened or abolished their upper houses of parliament, the US remains behind the times, which increases the number of veto points in the system, hampers the ability of Congress to pass legislation with any consistency or of any great importance, and increases the likelihood of debacles like last October's government shutdown. The best solution would be to get rid of the Senate entirely, but that's never going to happen. It's a matter of scholarly dispute whether or not a constitutional amendment would suffice to do away with the body, given that Article V, which sets the rules for amendments, states "no state, without its consent, shall be deprived of its equal suffrage in the Senate."

But if we're stuck with the Senate, the least we can do is try to remedy the incredible inequality between states' power in it. At the moment, because states are given equal representation in the body, a Wyoming voter has about 66 times the say of a California voter in the Senate. Senators representing a mere 17.82 percent of the population can pass a law, and ones representing 24.2 percent can break a filibuster.

One way to mitigate that problem is to break up states until they're all much closer to each other in population. Urban planner and illustrator Neil Freeman made an exceptional map showing what a US divided into 50 states of equal population would look like: 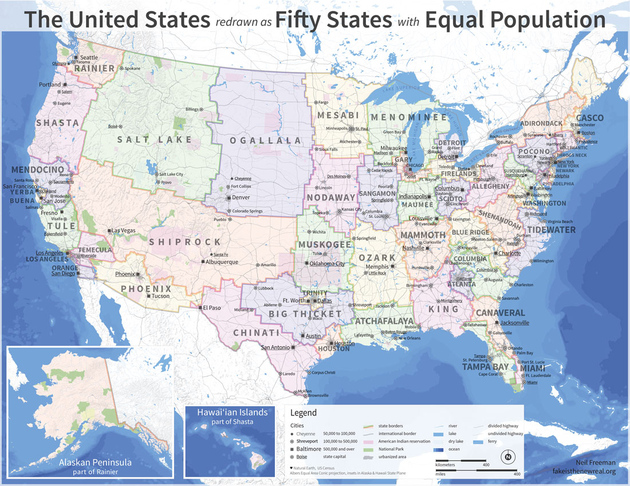 Freeman proposes resetting state boundaries at every Census to ensure equal populations. But there's reason to think Draper's approach — of creating more states rather than rearranging the existing number — is more promising. It's probably easier to convince Californians near the Oregon border that they should be free of Bay Area and SoCal influence than it is to convince Las Vegas residents that they should be in the same state as Amarillo (as Freeman's map would have it). And if enough large states like California break up, we can get to an equilibrium where there are a large number of equivalently small states, and little political inequality between them at the federal government level.

If you're a fan of Freeman's map, he's selling poster versions of it here.