Yes, Gaza militants hide rockets in schools, but Israel doesn't have to bomb them

Share All sharing options for: Yes, Gaza militants hide rockets in schools, but Israel doesn't have to bomb them

A United Nations agency dedicated to helping Palestinians discovered 20 rockets hidden in one of its Gaza Strip schools on Wednesday, according to an alarmed press release from the agency. Palestinian militant groups such as Hamas dominate Gaza and use rockets as a tool to terrorize nearby Israelis.

"This is a flagrant violation of the inviolability of its premises under international law," said the release from the agency, the United Nations Relief and Works Agency for Palestine Refugees in the Near East (UNRWA). "This incident, which is the first of its kind in Gaza, endangered civilians including staff and put at risk UNRWA's vital mission to assist and protect Palestine refugees in Gaza."

israel is strong enough to choose to not bomb civilian structures

Both Hamas's use of civilian Palestinian buildings and Israel's strikes against those buildings are highly controversial, and rightly so. It would be understating things pretty dramatically to say that this an aspect of the Israel-Hamas conflict where both sides are behaving badly. But that does not make them equivalent.

Only the people responsible can know for sure why Palestinian militants would use civilian buildings, but any real possibility is bad. Maybe militant groups use civilian buildings like this UN school simply because they don't mind the danger this creates for the Palestinians they claim to protect. Maybe it's because they are hoping that the rockets will be safer in a UN school because Israel won't want to bomb it, which means using Palestinians kids and teachers as human shields. An argument you hear from Hamas's harshest critics is that they are hoping Israel will target the schools, thus rallying people to their side.

None of these speaks well of militant groups or the effects of their rocket campaigns on Palestinian civilians. It is not a great secret that "resistance" campaigns by groups like Hamas and Palestinian Islamic Jihad bring far greater harm to Palestinian civilians than they do anything resembling liberation, but this incident is a small glimpse of how, and of the effects of militant groups firing hundreds of rockets into Israel from densely populated neighborhoods in Gaza. 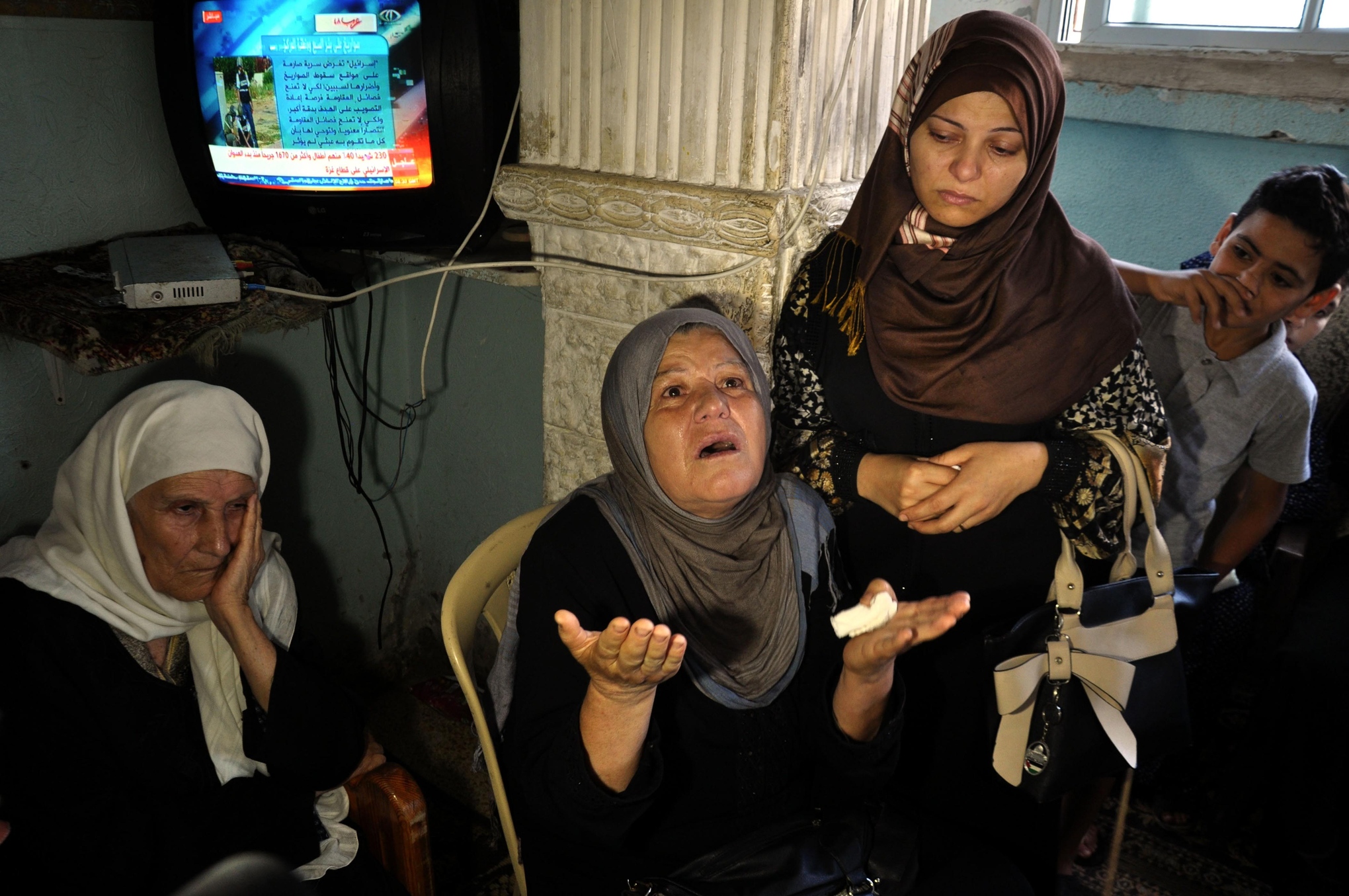 Relatives of Muhammed Bekir, killed in an Israeli airstrike as he was playing on the beach with his friends, mourn after his death (Mohammed Talatene/Anadolu Agency/Getty Images)

Israel has overwhelming military superiority in the conflict, and while that does not make Hamas rockets disappear or obviate their very real effects on Israeli civilians, Israel is strong enough to choose not to bomb a mosque and a center for the disabled in Gaza, as it did on July 12. It can choose not to bomb Gaza beaches frequented by civilians, as it did on Wednesday, killing four boys between the ages of 9 and 11.

There is no indication that Israel deliberately targets civilians, as Hamas does. But Israeli air strikes in Gaza, targeting Hamas and other militant groups that choose to embed themselves among civilians, kill an overwhelming number of Palestinian civilians. Last week, two UN agencies separately estimated that 70 to 77 percent of the Palestinian deaths have been civilians. Human Rights Watch on Wednesday accused Israel of "targeting apparent civilian structures and killing civilians in violation of the laws of war."

This is the one thing that both Hamas and Israel seem to share: a willingness to adopt military tactics that will put Palestinian civilians at direct risk and that contribute, however unintentionally, to the deaths of Palestinian civilians. Partisans in the Israel-Palestine conflict want to make that an argument over which "side" has greater moral culpability in the continued killings of Palestinian civilians. And there is validity to asking whether Hamas should so ensconce itself among civilians in a way that will invite attacks, just as there is validity to asking why Israel seems to show so little restraint in dropping bombs over Gaza neighborhoods. But even that argument over moral superiority ultimately treats those dying Palestinian families as pawns in the conflict, tokens to be counted for or against, their humanity and suffering so easily disregarded