More than three-quarters of all 4-year-olds in the US are enrolled in some kind of educational program, according to the Organization for Economic and Community Development.

That puts the US at 25th of 38 rich countries and developing economies — behind Mexico,  France, and Portugal, among other nations: 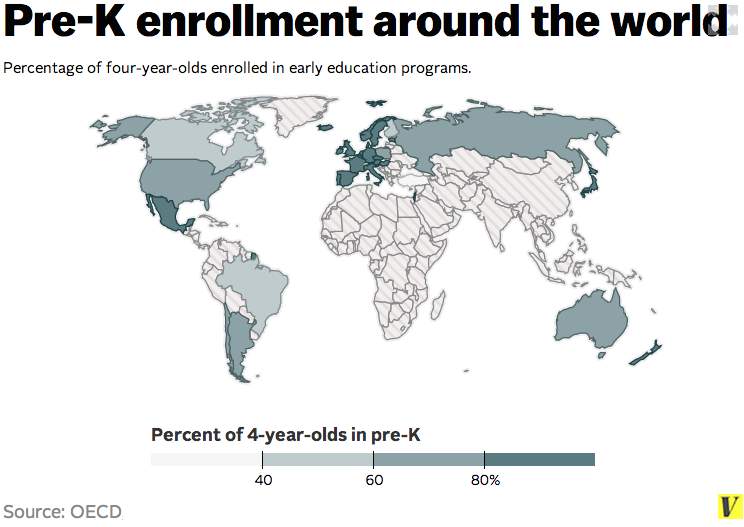 This map has some limitations. The OECD data doesn't say anything about how good the programs are — whether it's affordable, what the student-to-teacher ratio is, what the teachers' qualifications are, or whether it's truly an educational experience or a form of day care. And it includes some surprises — Finland, despite an internationally vaunted education system, has very low pre-K participation rates; so does Canada, which routinely outscores the US on international tests.

But the numbers suggest that the proportion of students who are going to some kind of pre-K has climbed in the US over the past few years. In 2005, 65 percent of 4-year-olds were in pre-K; in the 1990s, enrollment rates were around 60 percent. They're now at 78 percent, a fairly historic jump. (Perhaps because different groups define "early childhood education" differently, the US Education Department says 57 percent of all 3- and 4-year-olds were enrolled in school in 2012 — a much lower percentage that shifts the US closer to the bottom of the pack globally.)

Why does this matter? Early childhood education has nudged its way onto the political scene in the past few years. Cuts to Head Start, the federal early childhood program, became the face of the government shutdown last fall. One of New York Mayor Bill de Blasio's biggest campaign promises was creating universal pre-kindergarten. And a pre-K advocacy group found in a bipartisan poll released today that a proposal to help states and municipalities expand access to early childhood education is popular, with majorities of Republicans as well as Democrats in favor.

So it's worth taking a look at the geography of publicly funded pre-K in the US — which suggests that how much parents have to chip in varies significantly by state:

Like the OECD map, this one contains some surprises. Chief among them is that while universal pre-K has been championed by President Obama, some of the most robust universal pre-K programs are in red states or swing states. Nor do the states line up with states that generally have good public schools and a high level of support for public education, such as Minnesota and the Dakotas.

The First Five Years Fund poll found that support for a federal plan to help local communities provide early childhood education was highest in the Northeast, with 70 percent in support.

That makes it especially remarkable that some of the highest pre-K enrollment rates are in the South. Georgia runs a phenomenally popular universal pre-K program. Oklahoma's program has been cited as a national model.

Those states will get even more attention if Hillary Clinton runs for president in 2016. If Clinton has a signature education issue, it's early childhood — a less contentious and partisan issue than the other hot topics of K-12 education reform and student debt. It's possible that preschool's moment in the spotlight might not even have arrived yet.