The most important chart nobody is talking about

Share All sharing options for: The most important chart nobody is talking about

Take a gander at this amazing chart Louise Sheiner and Brendan Mochoruk made for the Brookings Institution based on CBO data: 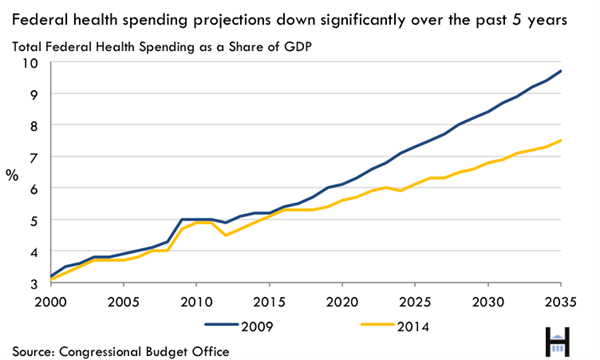 It highlights an amazing and under-covered change in federal budget policy, something that is a much bigger deal than recent declines in the short-term budget deficit. For years now, budget wonks have been warning that the real deficit problem is in the long-run, and it's driven by the cost of federal health care programs. What you're seeing on this chart is that those programs now look like they're going to be much cheaper than was previously believed.

Matt Yglesias explains in 90 seconds why you shouldn't worry about the national debt right now.

And yet to the extent that attention has been paid to these developments, it's been through a narrow partisan lens dedicating to asking whether or not the Affordable Care Act deserves the credit.

The big bipartisan debate about the future of the federal budget has been scarcely touched by this. Indeed, it's noteworthy that, while this chart was made with CBO data, nothing like it appears in the latest edition of the CBO's Long Term Budget Outlook. The new version of the CBO's annual report is updated with new numbers, but the text and the doommongering rhetoric are essentially unchanged. If there's any difference, it's that they've added a forth bullet point to what used to be a three-point list of bad consequences of high deficits and debt loads. Fix The Debt put out a blog post saying that "just as we were getting good news about falling deficits, a new report demonstrates that looking further out tells a much different story."

This is a classic pathology of the policy advocacy world: fear that any admission of good news is going to undermine the case for action.

So let's be clear about this — the declining projections in federal spending make the long-term budget situation look a lot better than it looked in 2009, but they don't make it look perfect. It's still true that the elderly share of the population is rising, and that health care spending is likely to grow faster than the overall economy. Those two trends will inevitably either squeeze out other forms of government spending, or else squeeze out private sector economic activity via higher taxes or more borrowing. That was true in 2009 and it's true in 2014.

But fundamentally, the worldview which says that, until the problem is solved, all discourse must be gloom and doom, is misguided. In a variety of contexts, optimism is a more powerful force for action than pessimism. Heart attack victims who are optimistic, for example, have a much higher survival rate than pessimists. One key reason, according to researchers, is that "optimists try, while pessimists lapse into passive helplessness."

Budget scolds appear to believe that only by frightening people into a state of maximum alarm can they spur action. But inspiring action requires a judicious mix of hope and fear. If people think there's nothing that can be done to solve the problem, they'll suspect the worst about any proposed change and look to safeguard the narrowest possible definition of their self-interest. The fact that the structural sources of health care cost growth can improve and that improving them does make a difference, is a powerful reason to try for more improvements.

The end of the "grand bargain"

Ezra Klein talks with Frances Lee, Professor of American Politics at University of Maryland, about polarization and Congressional gridlock.

One reason the deficit panic industry has resisted acknowledging the good news is that it undermines one of their main political conceits, a dedication to bipartisanship and to the pursuit of a "grand bargain" in which Democrats and Republicans will come together to solve the deficit problem once and for all.

The fiscal outlook is improving for a mixture of reasons that are outside politics, and ones that relate to Democratic Party victories. Democrats have pushed tax revenues up higher than the old CBO's Alternative Fiscal Scenario said was likely, and Democrats have probably contributed to the health spending slowdown through some of the measures in the Affordable Care Act. And given the realities of partisan polarization, if further progress is to be made this is what it will probably look like. Both parties have some ideas that would improve the fiscal outlook, and both parties will probably have some opportunity to implement some of those ideas.

There's nothing wrong, per se, with the idea of a grand bargain. But in a world where legislators see little incentive to cooperate with the other party, it's not particularly realistic. So framing solutions in terms of huge bipartisan compromises rather than multiple small steps is counterproductive. There's been no grand bargain over the past five years, but enormous progress has been made and more progress can be made in the future.

Next steps on the budget deficit

The good news is that there continue to be lots of good ideas about how to further reduce health care costs. In the past I've recommended more immigrant doctors, wide scope of practice for nurse-practitioners, action against pharmaceutical monopolies, and all-payer rate-setting as promising options.

And of course one can delve into the guts of things like the Simpson-Bowles plan and find literally dozens of ideas that together made up a proposed grand bargain. Individual items from this agenda can — and should — be taken up by politicians who like them.

Moving on from the grand bargain framework also opens up the terrain for ideas that are two "extreme" to be considered part of a bipartisan compromise. Adding a public option to the Affordable Care Act, for example, is a left-wing spending cutter. Meanwhile, the GOP could easily trim ACA costs by reducing how much insurance plans are required to cover. This sort of back-and-forth is a much more plausible path forward than a new big deal.

But to keep people — both legislators and ordinary citizens — motivated, it's necessary to remind that them that it's not an all or nothing battle. A ton of progress has been made in recent years and more could come in the future.