Share All sharing options for: 60 to 70 percent of Central American kids are showing up to immigration court

One of the chief concerns Republicans have raised about the current system for dealing with child migrants is that children aren't held in government detention while waiting for their immigration court hearings. The concern is that kids can simply abscond into the US and live as unauthorized immigrants, rather than showing up to court. But how many children who are sent to immigration court really do abscond, and actually show up to their hearings?

We now have a much more accurate answer to that question. Earlier this week, the Transactional Records Access Clearinghouse, a data analysis hub run out of Syracuse University, released data on children in immigration court over the last decade. Not all of these are children who entered the US unaccompanied, but most of them probably are. The overwhelming majority of children who entered immigration court in 2013 and 2014 were from Guatemala, Honduras, and El Salvador, the three countries driving the child and family migrant crisis. Among the ways TRAC offers to break their data down: whether or not a child was "in absentia" when the court case was decided.

When a child doesn't show up to immigration court, he or she is marked "in absentia" and the case is closed — almost always with a removal order. But a judicial removal order for a child who can't be found, skeptics say, doesn't mean much. So knowing how many children show up becomes an important part of knowing whether the system is working.

Previous data had shown that about 20 to 30 percent of children didn't show up for their court hearings. The TRAC data shows that that's still holding true. Of all the kids with cases filed over the last decade whose cases have been closed, 31 percent were "in absentia." That percentage is a little higher for cases filed over the last few years, possibly because there are more cases that are still pending from that time.

But the important question is: are Central American kids more likely to skip out on their immigration court hearings than other children? And the answer to that might be surprising. 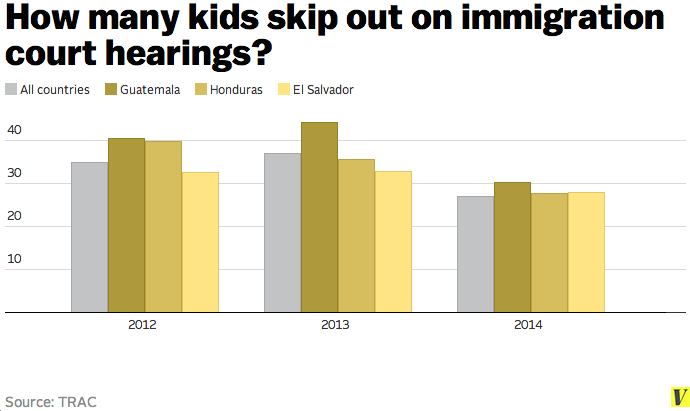 This chart looks at children whose cases were filed in 2012, 2013, and 2014 — i.e. those who have arrived during the current surge — and whose cases have been completed as of June 30, 2014. (Many children whose cases have been filed since 2012 are still in the court process, so they theoretically have another chance to show up.) That means that it's a good reflection of how many children who have come from Central America during the current surge end up skipping out on their hearings.

That's especially interesting in light of these maps that show that the children coming to the US from Honduras and El Salvador are coming from the most violent places in their home countries (which are, themselves, the most violent in the world). The Department of Homeland Security, which published the map of where children are arriving from, concluded that Guatemalan children "are probably seeking economic opportunities in the US. Salvadoran and Honduran children, on the other hand, come from extremely violent regions," which is probably what's driving them to the US.

That might help explain the relatively high absenteeism rate from Guatemalan children, and the lower ones from Salvadoran and Honduran ones. Guatemalan children who come might be less likely to qualify for humanitarian relief, and therefore have less incentive to show up to court. But for Salvadoran and Honduran kids, immigration court might offer them a chance to stay in the US and stay safe.

In general, there's a strong correlation between a child having a lawyer in immigration court and the child showing up for his or her hearing —and, ultimately, being able to stay. But that doesn't appear to be what's driving the differences among countries. Guatemalan children are actually more likely to be represented in court than Honduran ones (though all Central American kids are represented at below-average rates).

And it's not clear what it means that kids with lawyers are more likely to get to stay — just like it's not clear what's going on with the children who don't show up to court. Is it the case that all children are equally likely to qualify, but only some get lawyers that can help them navigate the system, and the rest fall between the cracks? Or is it that pro-bono lawyers will determine which kids are likely to qualify for legal status, and represent those — so children don't get lawyers because they would likely be deported anyway, and some of those simply abscond?