Share All sharing options for: How prison and a shifting economy have held young black men back

"On any given day in 2010, almost one in ten black men ages 20-39 were institutionalized," according to a new working paper for the National Bureau of Economic Research. That shocking statistic is just one piece of evidence, University of Chicago economists Derek Neal and Armin Rick argue, of a divide between black and white men in the US that has been yawning wider for decades.

And that 10 percent figure only applies to a given moment in time. The authors go on to point out that because people are entering and leaving prison so often, far more than 10 percent of African-American men are behind bars in any given year. And among certain subsets of that young demographic, the institutionalization rate is above one-quarter.

Neal and Rick used Census data to look at different age cohorts of both young black and white men from the 1960 census to 2010. Generally speaking, the data shows that across age groups, employment levels fell faster for blacks starting in 1970, while incarceration levels grew more quickly.

Here's the age group in the study that generally has the highest institutionalization rate, 25 to 29 year olds with no high school diplomas. The racial breakdown is staggering, with black young men in this cohort born in 1980 to 1984 more likely to be institutionalized than on the job. 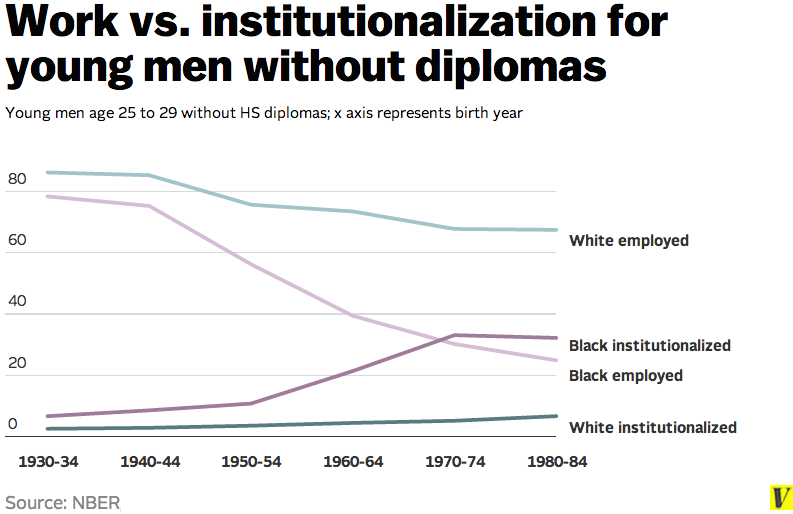 Neal and Rick's findings mirror those from a 2010 Pew Charitable Trusts report, which found that 37 percent of young African-american men who didn't finish high school were in jail or prison, while only 26 percent were working.

The trends are similar for all age groups — employment fell and incarceration rose for white and black men alike, with the issues are far more pronounced among black men. However, only among 20- to 29-year-olds do young black non-graduates' institutionalization rates exceed their employment rates.

And the trends are similar but less pronounced for all men of that age, high school dropouts or not. 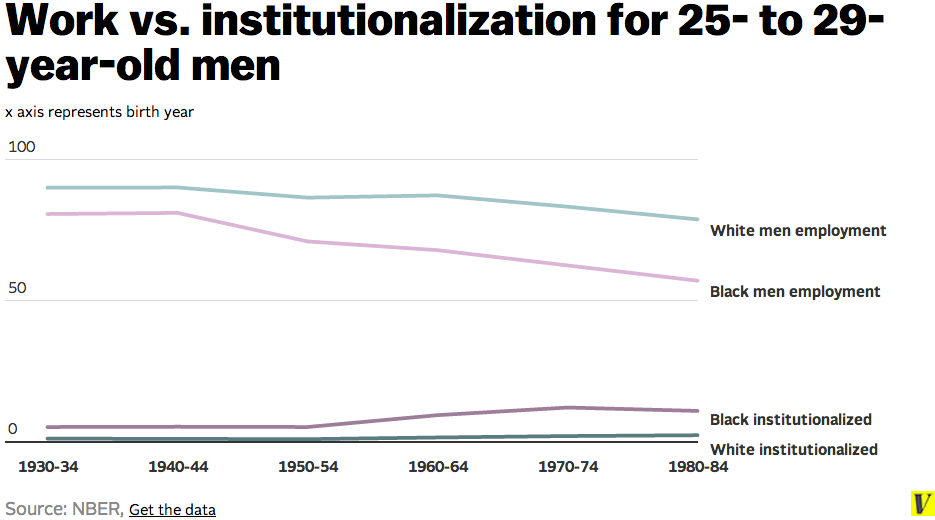 The recent spike in imprisonment isn't because young men suddenly started committing lots more crimes, and it's not that cops suddenly started catching more criminals, as Vox's Dara Lind writes. Rather, part of it is that prison sentences became both more common and tougher. Neal and Rick agree with this, likewise citing tougher sentencing as one reason for the spike in incarceration rates. However, they also note that the very high institutionalization rates for young black men also do come from increased admission rates to jails and prisons.

The economic repercussions of going to prison can be huge. As Pew found in that 2010 report, the typical former inmate at age 48 will have earned $179,000 less than if he had never been incarcerated. Those financial effects are even more pronounced for black and Hispanic men than white men. Incarceration brings down white men's total earnings by 2 percent, compared to 6 percent for Hispanics and 9 percent for black men.