The Food Network is home to a collection of some the most accomplished and powerful women on TV. There are moguls who run slick empires, deposed queens who command armies of Americans, and some who have turned nice teeth and an Italian accent into a $15 million business.

Rising above these women and into pop culture iconography is a woman known to many as the Barefoot Contessa. Beloved by many, the Barefoot Contessa is a great American hero. And with a new season of her show and her ninth cooking book on the way, it's probably a good time to get acquainted with the legend:

Who is the Barefoot Contessa?

Let's take this one step at a time. When people are talking about the Barefoot Contessa, they're most likely referring to Ina (eye-nah) Garten, a Brooklyn-born, Emmy Award-winning star on the Food Network. Her show is called Barefoot Contessa.

Why do they call her the Barefoot Contessa? Is she an Italian countess? Is she barefoot?

Garten, to our knowledge, is not an actual countess (contessa is Italian for countess) and is usually wearing shoes (normally flats) on her show. The name of the show comes from a specialty food store she bought in 1978, after her stint as a nuclear policy analyst in the White House. The store was located in Westhampton Beach, New York and named for an Ava Gardner film.

Wait. She went from a nuclear policy analyst to running a food store in the Hamptons? Who does that?

Ina Garten does that. Garten was working in the Office of Management and Budget at the White House in 1974 and moved to the Nuclear Regulatory Commission, where she oversaw the organization's budget in 1976. Garten left her job at the age of 30, dabbled with her husband in flipping houses in D.C.'s expensive neighborhoods, and eventually purchased The Barefoot Contessa in 1978.

"My job in Washington was intellectually exciting and stimulating, but it wasn't me at all,'' Garten told The New York Times back in 1981. At the time, the thought of leaving a plum and impressive D.C. job to run a high-end grocery store and fledgling catering business in the Hamptons was worrisome.

''I don't know yet what it's going to be after this, but I can't stand still,'' she said at the time.

Garten's gamble was successful. The Barefoot Contessa ended up doing really well, well enough to open a location in East Hampton. After growing her business, Garten eventually rented the store to former employees in 1996. The store became so popular that it was one of the locations featured in the movie Something's Gotta Give.

But, the store closed in 2004 after negotiations between Garten (who still owned the property) and the store's owners fell through. New York magazine reported that this move was done so that Garten could reclaim the store which lost many of its customers to a high-end market called Citarella.

Garten's show premiered in 2002. Garten parlayed that success into Food Network stardom and eight best-selling cookbooks. More than 6 million copies of her books have been sold. Her ninth, Make It Ahead, was released in October.

Well, that's some of it. There's that whole mantra of "doing what you love," something Garten gets to do and is paid for everyday. Leaving an enviable job in the White House for something unknown takes guts. Plenty of people are in not-ideal jobs, hoping that one day, they get to do something like open up a fancy food stand in the Hamptons. But most people are crippled by the (very legit) fears of financial turbulence or failure.

But Garten's "follow your dreams" mantra isn't the only reason people like her. For starters, she cooks good food, mostly seasonal American food (that aren't shy on calories or butter) with some French touches. From personal, hands-on experience cooking her recipes, her meatloaf and roast chicken are delicious. And her show makes fancy food accessible, though some of her recipes require ingredients that can be pricey (e.g. Filet of Beef Bourguignon).

"I don’t really tune in deliberately to see Ina Garten, but every time I stumble across her show, she is cooking food correctly by my way of thinking," Anthony Bourdain, professional food snob, told New York magazine. "I saw her making mashed potatoes once, and I was like, wait a minute, that’s, like, very close to the way Robuchon would make them."

Robuchon is the name of a fancy chef.

How fancy is Ina Garten?

Ina Garten guest-starred on finale of the fifth season of 30 Rock. She was part of a Liz Lemon fantasy sequence.

Her Hamptons home has an herb garden the size of a small Gap store. She's frequently entertaining guests on her deck, on her patio, or in her formal dining room. In theory, Garten could be throwing two different parties in different parts of her home, and her guests would never run into one another. But the crown jewel of Garten's home is her custom kitchen.

That kitchen is a veritable Noah's ark of appliances – the appliances come in pairs like Sub-Zero refrigerators, Viking ranges, and knife blocks. It's decked in stainless steel and chromes. And instead of harsh kitchen lighting, Garten instead uses table lamps.

In short: Garten is operating on a totally different level and this applies to the ingredients she's using, too. In many episodes, Garten will go to a farmers' market for fresh vegetables, talk about using "good" vanilla extract, and visit high-end cheese stores and butchers for ingredients (there is a popular meme about the very fine ingredients Garten uses). There are also vacation episodes where Garten and her husband go to a different city, check out local cuisine, then go to farmers' markets and butchers there to cook things in their rented house. Their most recent adventure took them to Napa and San Francisco:

Who is Garten cooking all this food for? 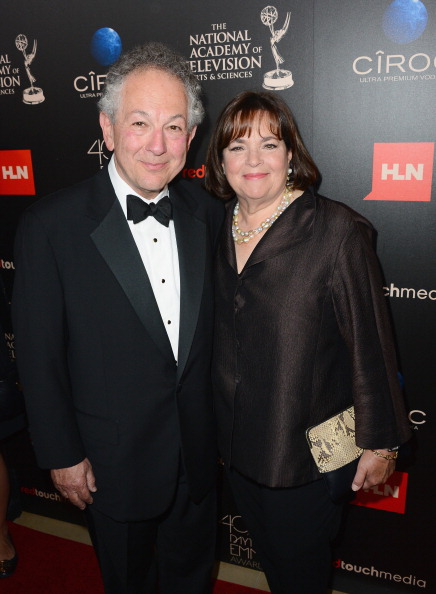 Garten with her husband Jeffrey at the 2014 Daytime Emmy Awards. via Getty Images

Primarily, Garten is cooking for her husband Jeffrey, whom she married in 1968. Jeffrey was a dean at Yale from 1995 to 2005 and is now a professor at the business school. Jeffrey is featured in many episodes and is mostly seen feasting on the delicious treats Ina is making. According to Ina, his favorite meal is her roast chicken (if Ina is cooking chicken, there is a 92 percent chance Jeffrey will show up).

This is the time Anna sat in the living room by herself and ate sandwiches while Ina cooked.

Garten also has special guest cooks once in a while. She has had Alec Baldwin and Mariska Hargitay on the show before. And, in June, she posed for a selfie with Taylor Swift.

Is Garten a feminist icon? A gay icon?

It depends on whom you ask, but most viewers would probably say yes to both. While her show is mainly about roasting chicken to perfection, rough-chopping hazelnuts for granola, or perfecting seafood gratin, there's also a meta story about her success, her life, and her friends, as well as how she views the world. When she was getting her start, Garten challenged the way women were viewed in society. "I grew up in a generation of women who didn't expect to work," Garten said in an interview with the Post-Gazette last year. "I was just at the cusp of women waking up and saying, 'Wait a minute, I could actually have a great life. I can do whatever I want. I can stay home if I want to. I can work if I want to.'"

Jeffrey and Ina also don't have children — something considered atypical at the time and even somewhat today. Garten hasn't really talked about her private life in full detail, but she has said that couples should be defined by love, not by how they match up to the stereotypical depiction of a family."Family has a traditional context, but today, it's not as simple as two parents with 2.3 kids," she writes in her book Barefoot Contessa: Family Style."It's spouses with no children, like Jeffrey and me; it's a group of women who meet to cook dinner together once a month; it's a one-parent family with adopted children; and it's two men who've made a life together."

How do I watch the Barefoot Contessa?

The new season of Barefoot Contessa begins on Sunday at 10 a.m.