Judge: Death penalty in California is too random to be constitutional

Share All sharing options for: Judge: Death penalty in California is too random to be constitutional

Cormac Carney, a judge at the US District Court for the Central District of California appointed by George W. Bush, has ruled in Jones v. Chappell that the death penalty as currently practiced by the state of California is unconstitutional.

In his opinion (which the Death Penalty Information Center has uploaded here, and which you can read at the end of this post), Carney argues that death sentences are carried out in an effectively random and arbitrary manner.

Carney's opinion was accompanied by a long appendix table detailing the outcomes of every death sentence between 1979 and 1997; he excluded sentences after that year because "for all but a small handful of those individuals, state proceedings are still ongoing, and none have completed the federal habeas process." The data excludes convictions that were overturned by the California Supreme Court and those whose "post-conviction proceedings have not been stayed based on their lack of mental competency to face the death penalty." Here's what it looks like, in sum: 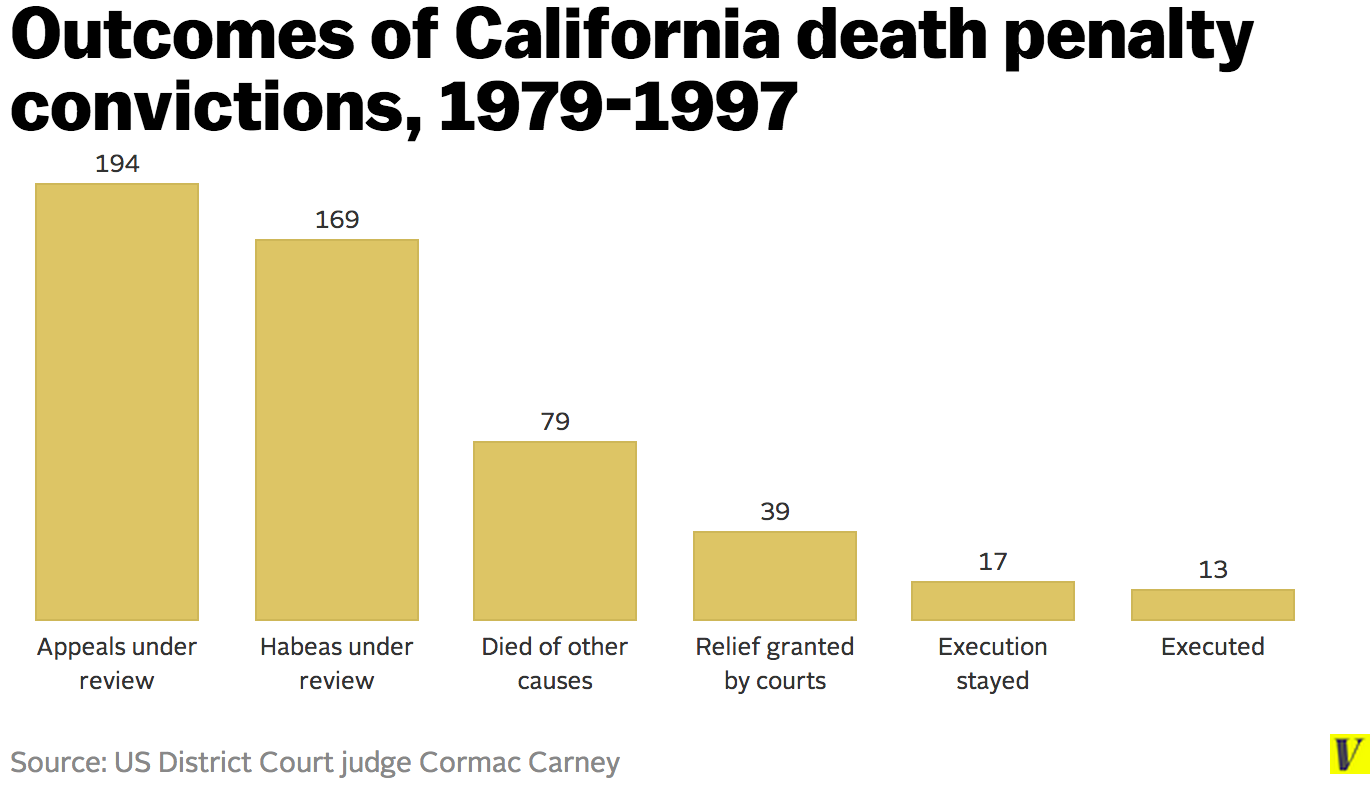 What's more, Carney argues, there isn't anything separating the rare cases where executions actually occurred from the vast majority where they didn't. Whether someone dies by execution is primarily determined, he writes, "depend[s] upon a factor largely outside an inmate’s control, and wholly divorced from the penological purposes the State sought to achieve by sentencing him to death in the first instance: how quickly the inmate proceeds through the State’s dysfunctional post-conviction review process."

But the other three in the majority (Potter Stewart, Byron White, and William Douglas) argued that it was the arbitrariness with which death sentences were handed out that caused the problem. "These death sentences are cruel and unusual in the same way that being struck by lightning is cruel and unusual," Stewart wrote. "For, of all the people convicted of rapes and murders in 1967 and 1968, many just as reprehensible as these, the petitioners are among a capriciously selected random handful upon whom the sentence of death has in fact been imposed." If the death penalty were to be constitutional, in other words, it had to be imposed in a consistent and non-arbitrary manner.

Arbitrariness in execution is still arbitrary, regardless of when in the process the arbitrariness arises

States revised their statutes in response to Furman and four years later the court started letting the new, amended death penalty laws stand, ending the Furman moratorium. And it's worth noting that Stewart, White, and Douglas's opinions were not controlling, and did not represent the opinion of the court.

All the same, Carney cites Furman and argues that the arbitrariness with which people who are sentenced to death in California are executed is unconstitutional for the same reason that arbitrarily imposed sentences were, Stewart, White, and Douglas argued, unconstitutional. "The Eighth Amendment simply cannot be read to proscribe a state from randomly selecting which few members of its criminal population it will sentence to death, but to allow that same state to randomly select which trivial few of those condemned it will actually execute, he writes. "Arbitrariness in execution is still arbitrary, regardless of when in the process the arbitrariness arises."

He also notes that the arbitrary nature of California's death penalty application also reduces whatever legitimate policy interest the state may have in death sentences. Erratic executions diminish whatever deterrent effect the death penalty may or may not have (a recent National Research Council review suggested there's not a solid enough literature to say that such an effect exists at all, but Carney puts this question to the side). And the small chance that an execution is actually carried out makes the death penalty a very weak form of retribution.

The case now goes to a panel of the Ninth Circuit Court of Appeals, which will either affirm (in whole or part) or reverse Carney's opinion. The court is famously liberal, including on death penalty cases, but a lot depends on the composition of the panel.

Prosecutors may request a stay on the effect of the ruling pending appeals, but it won't matter much either way, as California has since 2006 been prevented from carrying out any executions due to a federal ruling that its lethal injection protocol violated the 8th Amendment and, after the protocol was amended, a state ruling that the new protocol violated California procedural law.

Here's Carney's full ruling. Many thanks to Chris McDaniel of KWMU for passing along the data appendix.