Not all women love purses, and other lessons ABC’s comedies will need to learn

Share All sharing options for: Not all women love purses, and other lessons ABC’s comedies will need to learn

As a reminder, I'm at the summer Television Critics Association press tour through next week. If you're curious about what that means, read a quick explanation here. And follow my writing from the tour at my blog.

As I mentioned in my introductory press tour write-up, one of the best things about TCA events is getting to hear from the producers and stars of new shows about how they're dealing with turning a pilot into a full-fledged show. Yesterday's ABC sessions provided a good case in point in how this works, thanks to two pilots that didn't work and one that sort of does.

Manhattan Love Story has the weakest pilot of any of ABC's new shows. (It's here I should point out that pilots will occasionally change between their filming and their broadcast, though it's rare for it to happen. So any one of these shows could be shifted extensively between now and air.) MLS's gimmick is that viewers get to listen to the secret thoughts of characters, which are conveyed via voiceover. It opens with a lengthy section where the series' male and female leads (Jake McDorman and Annaleigh Tipton, respectively) respectively check out women and check out purses. It doesn't miss any other romantic comedy clichés it can think of after that, and it frequently reduces the characters to complete stereotypes. Also, the voice-over gimmick is incredibly isolating, leaving the audience staring at two people who are smiling pleasantly while a disembodied voice talks over them. It's a little eerie, frankly.

What was interesting was the way that the show's TCA panel negotiated these questions. For the most part, the answers were the sort of boilerplate you might expect from this sort of situation: The voice-over would probably be leaned on less over the course of the season. (This is almost certainly true, as these sorts of gimmicks tend to die away the deeper a show gets into its run.) The audience would realize the stereotypes were just a starting point, after which we would realize how deep the characters truly were. (This one is less likely true, but, hey, it's possible. It's happened before.)

But the most fascinating moment occurred when Tipton confronted this question. The actress, who's easily the best thing about the pilot, is making her debut as a TV regular with this show, and she said that part of her initial meetings with creator Jeff Lowell about the project were about this very question, of whether her character could expand beyond the stereotypical. "You don't get many opportunities to see a girl's inner thoughts. And I don't really like purses, personally. I carry around a shopping bag," she said, before continuing. "It really was difficult for me to have to kind of get into Dana's head. But we have some incredible, feisty female writers that they put together. And I think, as the characters develop, Jeff and the producers, they've been so incredibly open to really tapping into what real women think."

It felt like a refreshing moment of candor. It's rare to have an answer here that leans into something that doesn't work in a pilot and is actually critical of that element, even if only slightly. Manhattan Love Story has an awful time slot, airing Tuesdays at 8:30, and is unlikely to live long enough to see if bringing a female influence to the writers' room will result in more fully-formed fictional women. But for a very brief moment, Tipton made the show more interesting than just another failed TV attempt at a romantic comedy. 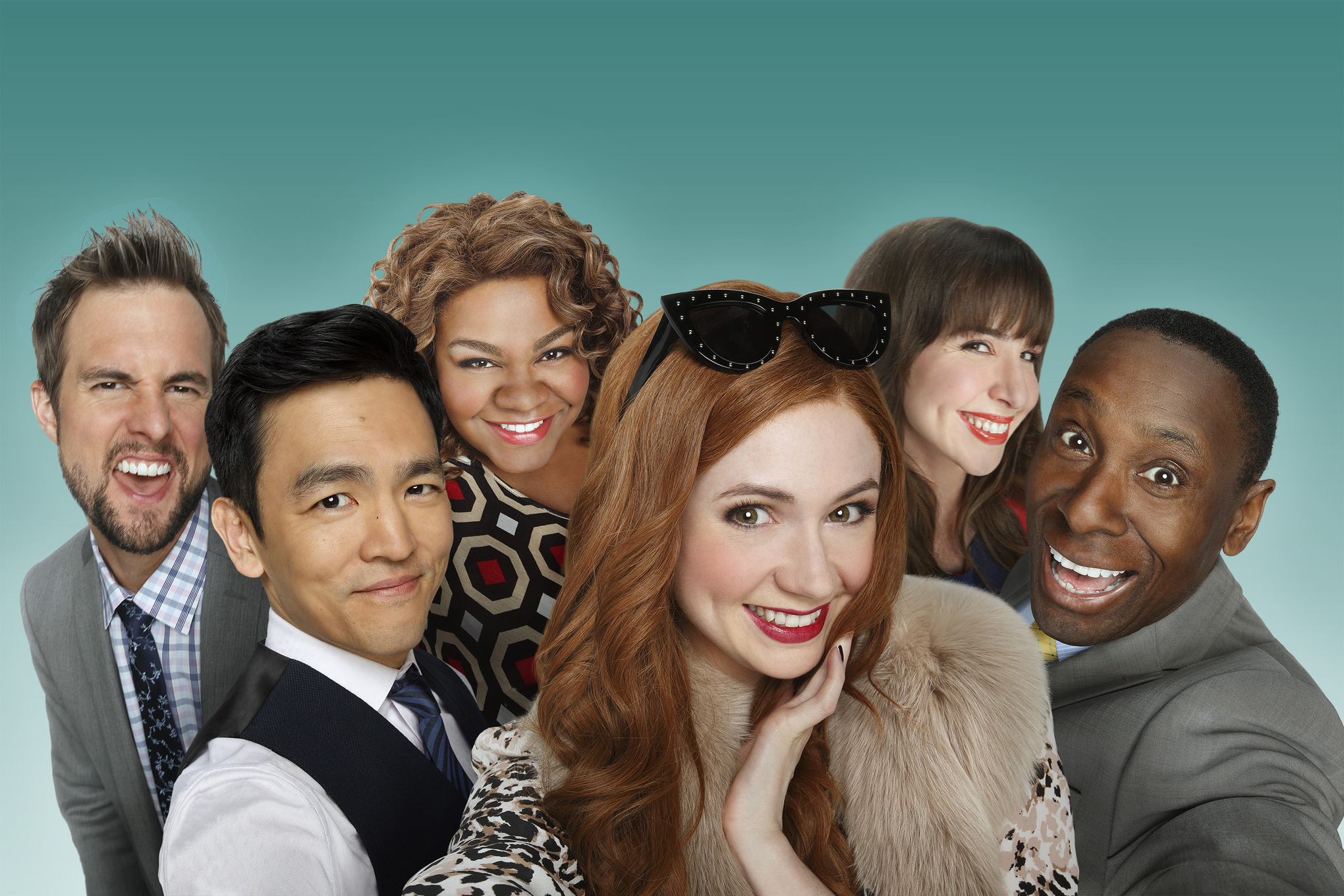 The cast of Selfie

Then there was Selfie, a show where everybody involved is ridiculously talented, yet the show just doesn't work quite yet. The creator is Emily Kapnek, who also created the lamented, underrated Suburgatory (also for ABC) and has built the show roughly off the structure of George Bernard Shaw's Pygmalion (later musicalized as My Fair Lady). The lead actress is Karen Gillan, who was always excellent on Doctor Who, even when the show itself was occasionally falling apart around her. And the lead actor is John Cho, who's been one of the best parts of a huge number of ensemble casts and deserves a shot at playing the romantic lead. Here, he plays the Henry Higgins type to Gillan's Eliza Doolittle riff.

Sadly, in the Selfie pilot, Cho is the only element that mostly works. The rest of what's presented is an often grating mess, with Gillan sublimating her native Scottish accent in favor of a faux-Valley Girl patois and Kapnek peppering the script with the sorts of slang terms ("jelly" in place of jealous, for instance, or even the show's title) that were likely hip when the script was written but increasingly feel overdone and will feel only more so when the show debuts in the fall. And the show is also really mean, having trouble understanding that the character of Eliza Doolittle in Pygmalion works because we're able to see people's aversion to her exterior is driven entirely by their class status. Her inner self is really quite charming. That's not the case with Gillan's character here.

What quickly emerged in the Selfie panel was that the show everybody thought they were making was hugely different from what was actually onscreen. Kapnek talked a few times of wanting the audience to have real feeling for Gillan's character, but the feeling just doesn't translate, nor does the thought that Cho's character's judgment of her is supposed to indicate a flaw in his personality. To a real degree, it seems like all involved are hoping that by leaning on the comparison to My Fair Lady, everyone watching will understand what's happening, rather than having it shown to them.

This might seem discouraging, but it's the sort of thing that can be overcome. In fact, Kapnek has overcome it before. The first half-season of Suburgatory had some issues with tone (though none as serious as Selfie's), before she managed to largely rein the series in as it went along. Of course, that show could never re-attain the ratings juice it had in that first half-season and was subsequently canceled. There's room for hope here, but the fix had better be quick. 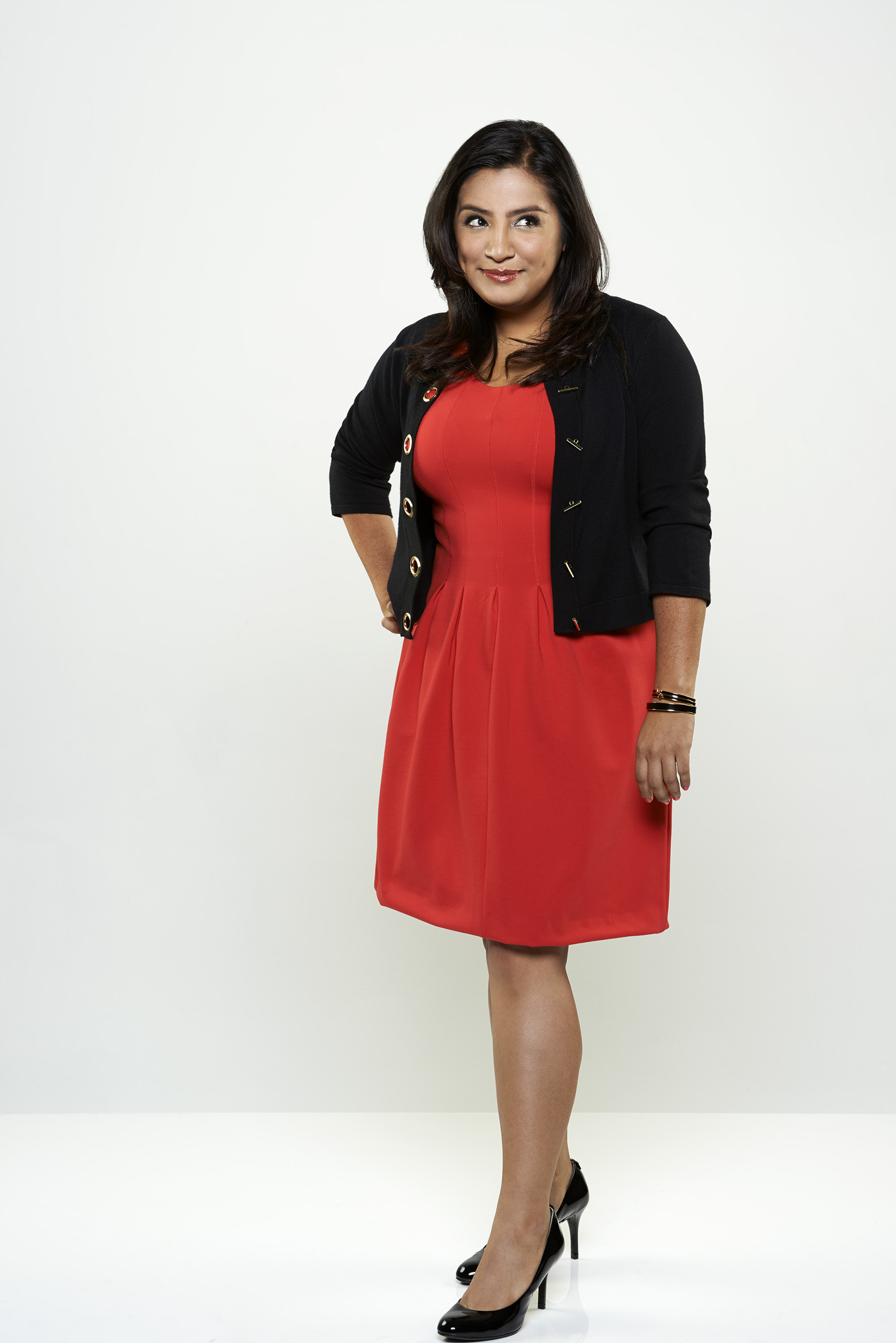 Cristela, meanwhile, is a pilot that critics seem to mostly be okay with. Like almost all multi-camera sitcom pilots nowadays, it's a little broad. (A multi-camera sitcom is a show filmed in front of an audience, like Cheers or Friends, and captures more of a theatrical feel compared to single-camera shows like Parks and Recreation or Community.) But a lot of times, having an appealing star can make up for a lot in a pilot, and the lead actress here, Cristela Alonzo, is an enormously appealing presence. Having risen out of the world of stand-up, Alonzo seems almost like a throwback to the days when comedians were handed sitcom deals as a matter of course, but her show was very nearly passed on before getting added to the ABC schedule at the last minute. Now, she seems likely to be the subject of numerous "get to know..." profiles come September.

Therefore, the panel had exactly two missions it needed to accomplish in order to assuage any fears critics had about the show: it had to give the reporters lots and lots of Alonzo being funny and charming, and it had to meet head-on the fact that multi-camera sitcoms are far from hip nowadays. The panel actually got around this early on, in one answer, in which Alonzo discussed both her upbringing (during which she lived for a time with her family as squatters in an abandoned diner) and her love of multi-camera sitcom heritage, a love that grew from watching Nick at Nite.

"I grew up in a border town in South Texas right next to Mexico, a million miles away from this world. And to me, multi cams are just, it's like theater. When they're done well, it's just you dive into the life, and you follow the characters, you follow the story. To me a multi cam is just I like the feeling you get from the audience. I loved watching multi cams growing up, and my favorite ones I can still watch today, and even if I know it's a very special episode, I still find myself getting so connected with these stories that I thought it just captured this essence of theater that not a lot of people get to see. You know, for me, I loved theater as a kid, and Broadway shows didn't come to my border town. ... Nobody comes down there to perform any shows. So I always think about those towns and girls like me, kids like me that don't have the exposure to that. And that's why multi cam seemed like the only option."

Cristela is going to succeed or fail based almost solely on whether audiences warm to Alonzo. It, like Manhattan Love Story, is stranded in a tough timeslot on Fridays. But at least ABC and the show itself understand how appealing Alonzo can be, and are putting that best foot forward.