Almost half of Americans want to deport migrant kids

Share All sharing options for: Almost half of Americans want to deport migrant kids

As the child and family migrant crisis has continued to be in the news over the last few weeks, more Americans are beginning to believe that it's a serious problem. That means they want something done, quickly. And deporting all the children and families who have come to the US is the most obvious option for quick and decisive action. 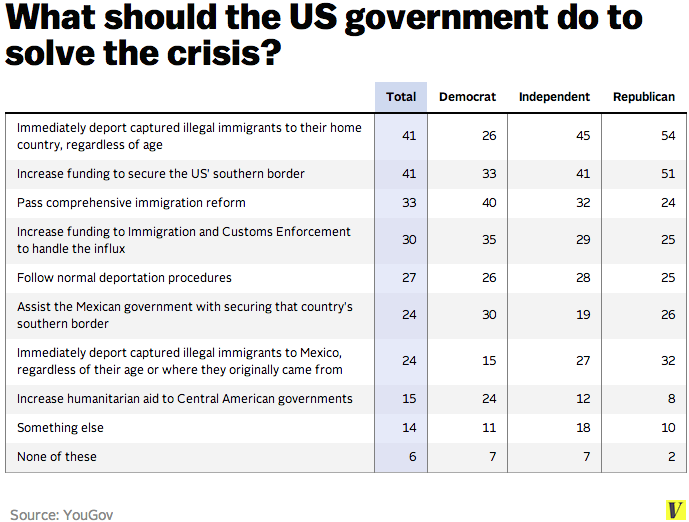 That's the takeaway from a new poll that YouGov and the Huffington Post put out today. That poll gave respondents the choice between deporting children to their home countries as soon as possible and keeping them in the US "until it's certain they have a safe place to return." (That doesn't reflect any policy currently being proposed, but whatever.) Nearly half of Americans — 47 percent — said it was more important to deport children as quickly as possible. 38 percent preferred to keep them.

That's a slight overstatement of the number of Americans who affirmatively want to deport kids en masse. Another poll question gave respondents a broad menu of options for how to address the crisis, and allowed them to pick as many as they wanted. Given the broader menu, only 41 percent of Americans chose "immediately deport captured illegal immigrants to their home country, regardless of age." The slight gap between those two responses shows that at least some of the appeal of the "mass deportation" option is that it seems more decisive than the alternative of just waiting for things to settle down.

It's also more decisive than most other steps the US could take, though, which is why deportation en masse was tied for the most popular option.

These preferences don't map onto what politicians are saying needs to be done. Both parties are calling for more security on Mexico's southern border; few Americans see that as an appealing option. Most politicians are agreeing that addressing the "root causes" of emigration from Central America is an important priority; but foreign aid, as always, is unpopular.

On the flip side, no politician is saying that more funding is needed to secure the border — Republicans who believe that the border isn't secure think that the problem isn't money, it's the Obama administration's policies. But the American people have heard the words "border" and "crisis," and have assumed that more money is necessary.

More than anything, the poll shows that Americans don't agree on the right policy response because they don't agree on the facts. Americans are split on whether or not children would be safe in their home countries; 39 percent think they're fleeing unsafe places, while 36 percent think they have somewhere safe to return. But people don't generally believe that children are coming to the US because they're unsafe at home; only 27 percent think violence in Central America is the main reason kids are coming, while 58 percent think it's because children want "amnesty" from the US government. (Even Democrats slightly favor the "amnesty" interpretation, which makes sense given that President Obama and others in the administration have said that's a major reason.)

It's easy to look at this sort of confusion and take away the idea that Americans generally want tens of thousands of kids to be deported. The poll does show that's true, to an extent. But that's also because Americans are looking at the confusion in Washington and on the border and gravitating toward the option that seems most decisive — and in this case, that's throwing more money at the border, and fast and furious deportations.