The UN thinks we could hit peak births in 2014

Share All sharing options for: The UN thinks we could hit peak births in 2014

Here's a great chart from Swedish health professor Hans Rosling. The UN's Population Division now expects the global number of births to hit a record 139 million in 2014 — and then start falling slightly thereafter.

In other words, there's a real possibility that we could hit peak births as soon as this year (albeit with another bump in the 2040s): 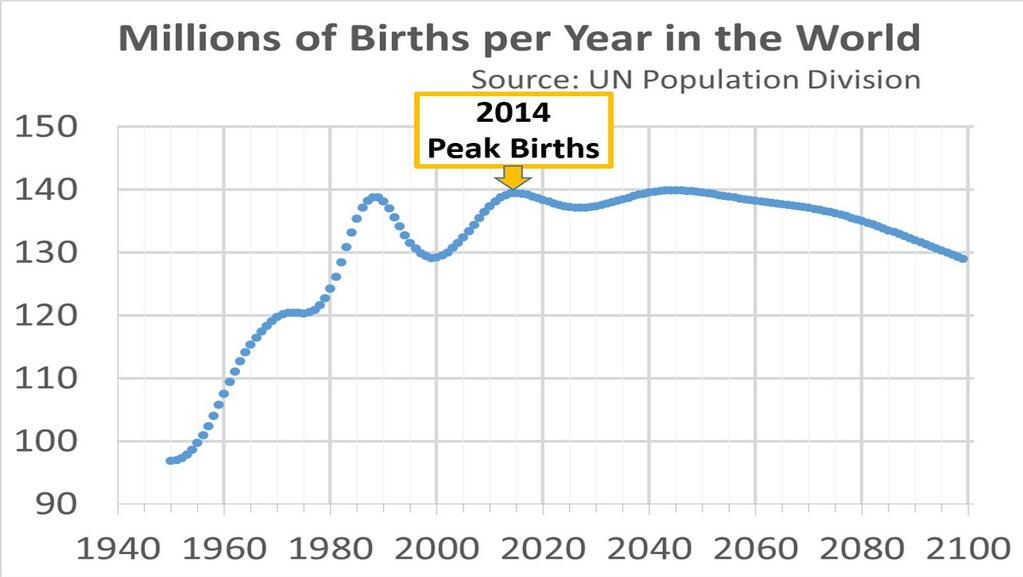 You can find the UN's data on births here. This is for the "medium fertility" scenario.

Now, even if this does happen, the total number of people on the planet would still keep growing, so long as births outnumber deaths. In its most recent forecast, the UN predicted that the world's population would keep rising throughout this century, reaching 10.9 billion people by 2100.

But then again, it's also possible that these figures aren't correct — and the above chart is way off. Demographic predictions are notoriously difficult. And one big reason for that is that it's hard to count even the number of people currently on the planet.

Why population estimates are so uncertain

Even the best-run census in Europe or North America tends to undercount the number of people by as much as 3 percent. And the uncertainties are even larger in places like Africa or Asia.

For instance, there's a long-running dispute about how many children currently exist in China. The official numbers say about 1.2 children per women. But families are believed to be hiding tens of millions of babies to evade the one-child policy. Likewise, some African countries often take decades to update their census data — which means the current numbers could be way off.

Making predictions about the future is even harder. A lot depends on how fertility rates change, and those can fluctuate unexpectedly. Back in 2011, the UN had to revise its forecast for the number of people in 2100 — from 9 billion to more than 10 billion — because fertility rates in places like Africa weren't falling as predicted.

Nowadays, the UN tends to give a probabilistic forecast with a wide range of projections for future population growth. In many forecasts, the population keeps growing — in others, global population peaks by 2080 or so: 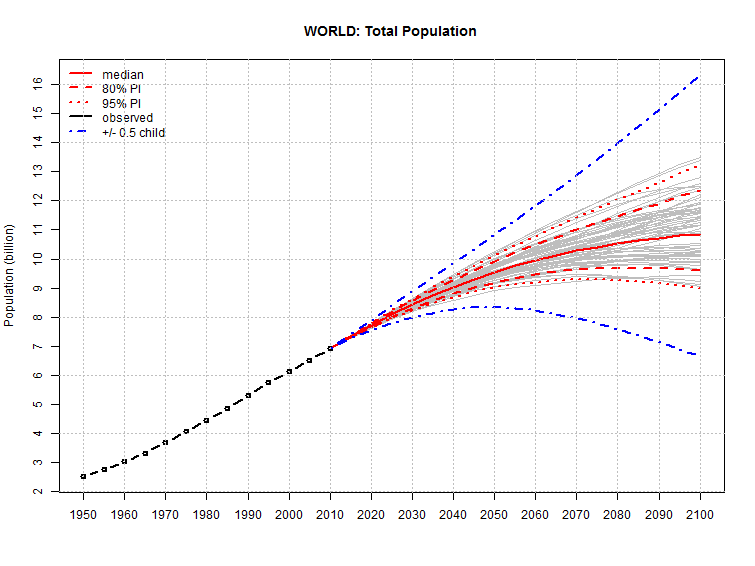 And, of course, there are other groups with their own forecasts. Analysts at Deutsche Bank think the world's population will peak in mid-century at 8.7 billion people and then decline thereafter. They expect fertility rates to fall much faster than the UN does.

The outcomes here matter a lot. For instance, many researchers have pointed out that it will be an enormous challenge to feed 9 billion without destroying the planet. But that task becomes even tougher if it turns out we'll have 12 billion people.

So bottom line: The UN's current best estimates suggest that 2014 will be a peak birth year. But those estimates may well turn out to be wrong — and we may not know the real answer for decades.