Study: Sexual harassment is a real problem in science

Share All sharing options for: Study: Sexual harassment is a real problem in science

Sexual harassment and assault are problems that no one should have to deal with in the workplace. And according to one new study, even science isn't immune to such problems.

The paper, published in PLOS ONE, surveyed more than 600 anthropologists, archaeologists, biologists, zoologists, and other scientists about their experiences while doing fieldwork away from the university.

And the picture was disturbing — there were many experiences of sexual harassment and assault, as well as little awareness of how to report abuses.

Now, the survey was not a random sampling of researchers — so this can't be used to extrapolate the frequency of sexual harassment. But it's the best existing data set yet on harassment and assault within science. And the data suggests that this indeed is an issue in need of closer attention.

"There is a growing body of work describing professional disparities between men and women, such as representation in major labs and in conference symposia, funding and publishing success, and success on the job market," study co-author Julienne Rutherford, a biological anthropologist at the University of Illinois at Chicago, told me in an e-mail. "But the focus on harassment and assault in the science was missing until this study."

Many had experienced sexual harassment and/or sexual assault 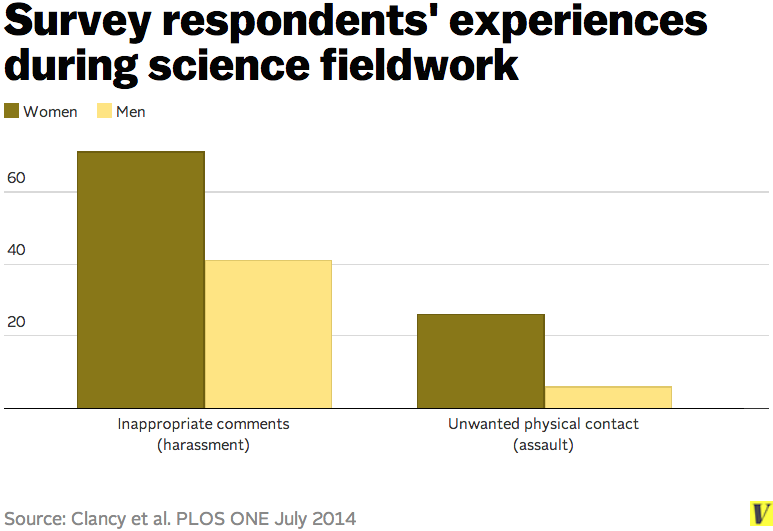 The survey authors asked subjects several questions, including these two about sexual harassment and assault:

1) ‘‘Have you ever personally experienced inappropriate or sexual remarks, comments about physical beauty, cognitive sex differences, or other jokes, at a field site? (If you have had more than one experience, the most notable to you).’’

2) ‘‘Have you ever experienced physical sexual harassment, unwanted sexual contact, or sexual contact in which you could not or did not give consent or felt it would be unsafe to fight back or not give your consent at a field site? (If you have had more than one experience, the most notable to you).’’

Of the women who responded to the survey, 71 percent reported having experienced inappropriate sexual comments while doing scientific fieldwork and 26 percent said they had experienced sexual assault.

Women are more likely to be harassed by superiors, men by their peers 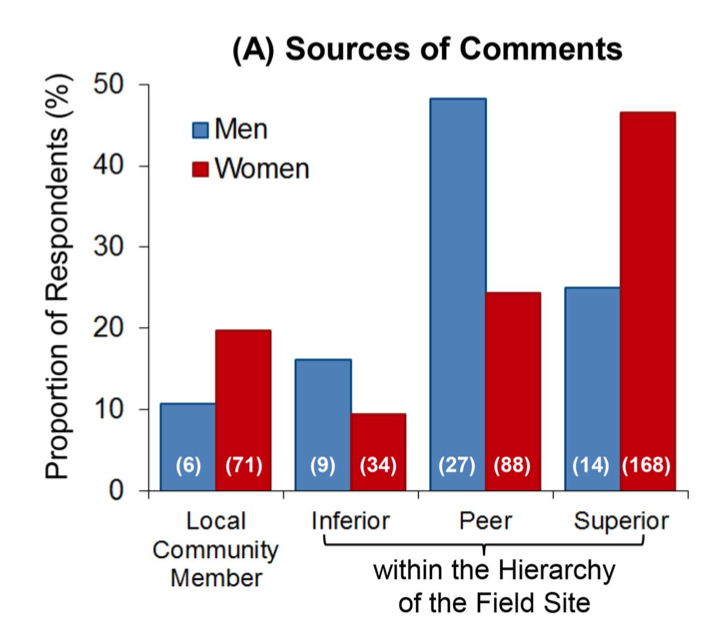 This is the chart for sexual harassment, but the one for sexual assault shows pretty much the same trends.

For women respondents who had been harassed during fieldwork (in red), about half of the harassers were their superiors. For men (in blue), the harassment was more likely to come from peers. In addition, women were more likely to be a trainee like an undergrad or graduate student at the time of their experience than men were. The authors point out that this is especially concerning.

"Other workplace aggression research suggests that abuses where the perpetrator is superior in rank creates more psychological harm for the victim," paper co-author Kathryn Clancy, an anthropologist at the University of Illinois, told me in an email. "It's like a double whammy for the female trainees disproportionately affected by harassment and assault."

What's more, of those who had experienced harassment or assault, only about 20 percent knew of a mechanism to report it. These figures are discouraging, but they also suggest several possible areas for improvement.

We still don't know how common these experiences are overall

As such, it's not valid to extrapolate these results to conclude, for example, that roughly 71 percent of all female scientists in the field experience sexual harassment. All we know is that 71 percent of the women who chose to respond to this survey did.

The authors very carefully laid out several possible biases in their paper. And the biases come from both possible directions — so there's really no telling if this survey would be more likely to result in over-reporting or under-reporting of these events.

For example, some people who had witnessed or experienced sexual harassment or assault might be more likely to take the survey or pass it along to colleagues. But others might be less likely to take it, for example to avoid negative emotions. Finding actual rates of sexual harassment and assault would require a different study and a different paper.