Share All sharing options for: The 'not everyone should go to college' argument is classist and wrong

The economic return on investment for a college degree has never been higher. But the more that fact is discussed, the more some pundits seem to think the US is at risk of an epidemic of unnecessary college-going that can be averted by singing the praises of highly skilled trades.

The latest, in Businessweek, is headlined "Let's Start Telling Young People the Whole Truth About College" — the whole truth being that a four-year degree isn't the only road to a stable, even lucrative, professional life.

Fair enough. (Though the economic evidence still comes down heavily on the side of four-year college graduates being better off in the long run.) But the argument that "everyone shouldn't go to college" — reiterated with dozens of variations in the past few years — rests on some incorrect assumptions about higher education in the US.

Many people imagine a bright line between college and vocational education — Ph.Ds on one side, plumbers on the other. That line doesn't exist, and it hasn't for at least a generation. Particularly at two-year colleges, programs for future English majors and future auto mechanics often exist side-by-side. One path might lead to an associate degree, the other to a certificate, but they're both at a place called "college."

As higher education economist Sandy Baum wrote in a report for the Urban Institute: "It is common to hear the suggestion that many students should forgo college and instead seek vocational training. But most of that training takes place in community colleges or for-profit postsecondary institutions." 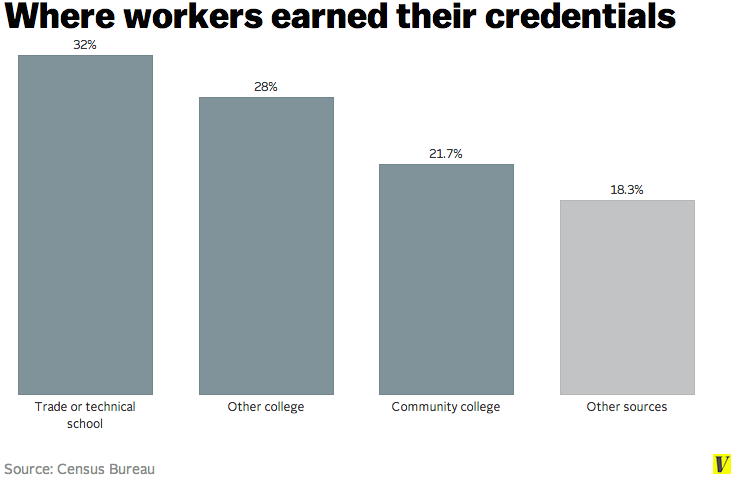 Somehow, criticism of the cult of the college degree never pinpoints the one group where a belief that "everyone should go to college" really is pervasive: the upper middle class. Students from families in the top fifth of incomes have gone to college in disproportionately high numbers since at least the 1970s. About 80 percent of them now attend college right after high school. More than half have a bachelor's degree by age 25. 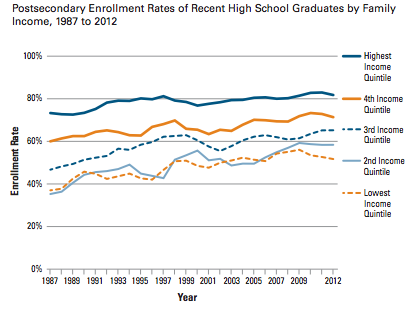 It's more than plausible that some of those well-off students could be happy and successful with a certificate in carpentry instead of a bachelor's in business. Yet the calls to tell the truth about the value of a college degree nearly always stop short of saying where— if too many people really do go to college — that truth-telling is sorely needed.