The 8 industries that create the most summer jobs

Share All sharing options for: The 8 industries that create the most summer jobs

The employment statistics you normally see cited in the media are seasonally adjusted, meaning run through an algorithm to flatten out regular surges in employment around Christmastime and the summer season. Seasonally adjusted data is more useful for most purposes, but the BLS made this chart showing the raw data for a few industries that have large summer peaks and it helps us understand something else — where are the summer jobs? 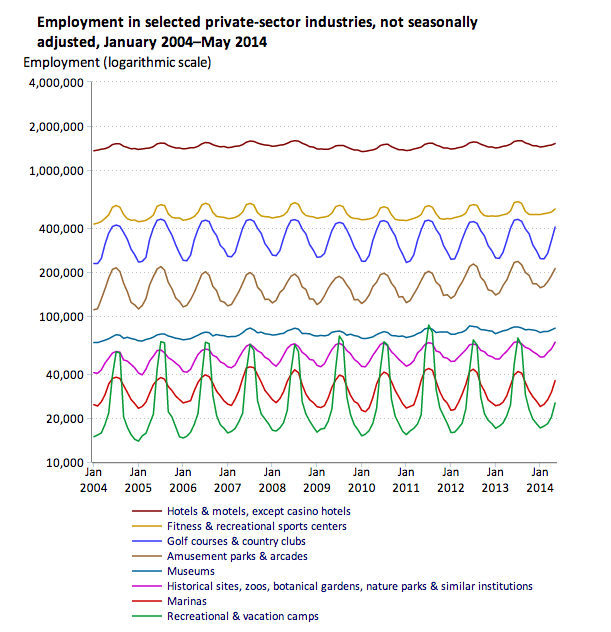 Note that this is a logarithmic scale, so the modest undulations of the hotels and motels line actually represents a quantity of jobs swinging up and down that's larger than the summer camp swing. Using the log scale captures the fact that the vast majority of hotel jobs are non-seasonal, but it obscures the fact that the raw quantity of seasonal hotel jobs is quite large.

But the biggest raw swing looks to be in the country club industry, where over 200,000 jobs are created and then lost again every summer. Meanwhile, as Danielle Kurtzleben has documented, teenagers are growing less likely to seek and obtain seasonal summer employment even as the seasonal trend in labor demand looks to be robust.