Fisher v. Texas, the affirmative action case that will not die, explained

Share All sharing options for: Fisher v. Texas, the affirmative action case that will not die, explained

Last year, the Supreme Court sent a challenge to the University of Texas's affirmative action policy back to a lower court for further review. A panel of judges from the Fifth Circuit Court of Appeals has now reviewed the case again, and again found in the university's favor.

The lawyers for the plaintiff — Abigail Fisher, a student rejected from UT-Austin in 2008 — plan to appeal. And that means this case could end up before the Supreme Court again for the second time in three years. Or the full 15-judge Fifth Circuit could find in Fisher's favor and put an end to the case, which has been working its way through the legal system for six years.

At issue in Fisher v. Texas is whether the state's use of race in college admissions is constitutional. The University of Texas at Austin admits most of its students by automatically letting in the top 10 percent of every high school graduating class, but other students are admitted under a more holistic process — one that considers race and other attributes rather than simply class rank.

The system was developed as a way to create diversity without considering race. A 1997 case, Hopwood v. Texas, forbade the consideration of race in admissions. Because schools in Texas, as in the rest of the US, are bastions of de facto segregation, admitting the top 10 percent of the graduating class from each school in Texas was a way to tacitly create racial diversity.

But the Top Ten Percent Plan didn't consider any markers of academic achievement other than class rank. A world-class trumpeter with mediocre grades, or a National Merit semifinalist who happened to attend a very high-achieving high school, could be shut out. To address those problems, the university also admits less than 20 percent of its incoming classes by looking at applicants in a more holistic way. Initially, because affirmative action was banned in Texas, those criteria included socioeconomic status and whether students' parents had attended college.

The percentage of students admitted under "holistic review has been falling, as this chart from the court's decision today shows: 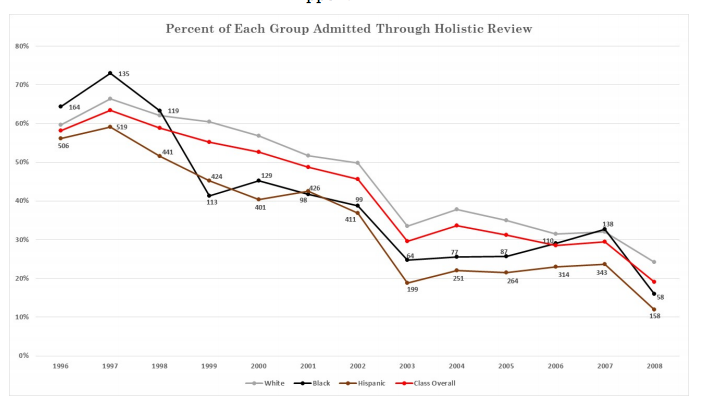 Race was added as a factor in the UT-Austin admissions process after 2003, when the  Supreme Court upheld affirmative action as constitutional. But compared to the Top Ten Percent Plan, the holistic review disadvantaged students from racial minorities, the Fifth Circuit panel wrote in its decision today:

Admission via the holistic review program - overwhelmingly and disproportionally of white students-is highly competitive for minorities and non-minorities alike. These data persuade us of the force of UT Austin's argument that a limited use of race is necessary to target minorities with unique talents and higher test scores to add diversity ... to the student body.

Fisher, who graduated from Louisiana State University in 2012, wasn't in the top 10 percent of her high school graduating class, nor was she admitted to UT-Austin through holistic review. Fisher's lawyers argue that considering race as part of the holistic review is unnecessary, in part because the university already achieves significant diversity through the Top Ten Percent Plan.

The Fifth Circuit found in the university's favor, and the case was appealed to the Supreme Court. In a 7-1 decision in 2013 that surprised many observers, the court found that the appeals court had not applied a strict enough legal standard when considering the university's case, and sent it back to be reexamined under "strict scrutiny" — essentially not giving the university the benefit of the doubt. Some supporters of affirmative action feared this was an insurmountable hurdle.

A panel of judges from the court again ruled in the university's favor in a 2-1 decision. The two justices in the majority pointed out that the university already pursues many of the race-blind solutions that opponents of affirmative action suggest. The Supreme Court's previous decisions on affirmative action, the majority writes, require such a decision: "To reject the UT  Austin plan is to confound developing principles of neutral affirmative action, looking away from Bakke and Grutter, leaving them in uniform but without command — due only a courtesy salute in passing."

If the Supreme Court wants to overturn affirmative action, in other words, it will have to address those precedents directly — which, depending on the outcome of the appeal, could happen as early as next year.