Share All sharing options for: Rihanna and Dwight Howard tweeted #FreePalestine and it worked out how you would expect

So a popular performer you might know named Rihanna tweeted this:

At least count, it had 6.9 thousand retweets. That's before the singer, naturally enough, deleted it.

It's not exactly a secret that the Israel-Palestine conflict is controversial, and tweeting #FreePalestine wades right into it. She presumably meant to express solidarity with Palestinians, many of whom in Gaza have been enduring a week of Israeli airstrikes that are targeting the Palestinian militant group Hamas but that the UN says have killed dozens of civilians as well. A two-word hashtag does not allow for an awful lot of nuance, though. For an artist as mainstream as Rihanna, wading into a conflict this contentious and complicated was bound to upset some people.

She's been burned on this topic before. At a 2013 show in Tel Aviv, some reporters in the audience thought she sang "all I see is Palestine" in place of "all I see is dollar signs" in the song "Pour it Up." The apparent implication was that all of the land there — currently Israel — is rightfully Palestinian. Not exactly something an Israeli crowd wants to hear, but it's also not what she actually said. The brief media firestorm before people realized she'd been misheard (someone found a recording) may help explain why Rihanna deleted her #FreePalestine tweet so hastily.

She's not even the only celebrity to get in trouble for tweeting #FreePalestine since the latest round of violence began. Dwight Howard, Houston Rockets center and one of the most famous players in the NBA, was asked by a fan what he thought: 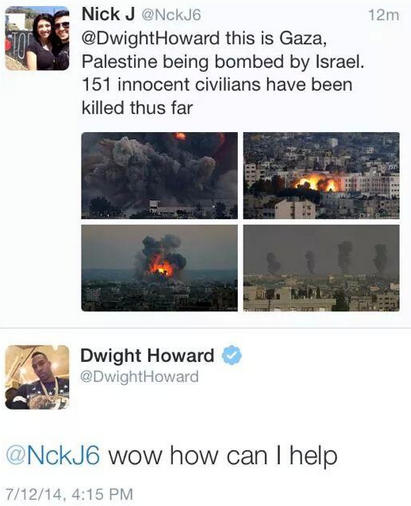 He then tweeted this:

Which he deleted, and apologized for:

previous tweet was a mistake. I have never commented on international politics and never will.

I apologize if I offended anyone with my previous tweet, it was a mistake!

The New York Knicks' Amare Stoudemire, who has Jewish heritage and has applied for Israeli citizenship after several visits, also deleted this: 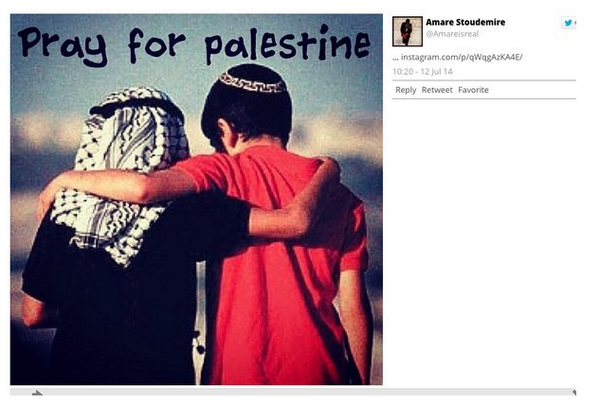 What you've learned from all of this is that the Israeli-Palestinian conflict is really controversial.