Share All sharing options for: Linda and Jason are the trendiest American names of the past century

As strange/great/alarming as Americans' pop culture-based naming habits are, the numbers involved are fairly low. It's striking that 241 babies were named after the Dothraki word for "queen" in Game of Thrones last year, but that's a trivial fraction of the total number of babies born in 2013. If we really want to see what's trendy in baby-naming, we need to look at total volume as well as the speed with which a given name is gaining popularity.

So that's exactly what David Taylor of prooffreader.com did. To find the trendiest names throughout the years, he devised a "trendiness" score, borrowing a technique from chemistry. The score for a given name is equal to the peak frequency of the name divided by the number of years between when it first hit 10 percent of that peak frequency — as it got more popular — and when it last hit the 10 percent market, on its way out. The resulting quotient is maximized by names that get very, very popular for very, very brief periods — trendy names, in other words.

So what are the trendiest American names since the Social Security Administration started keeping track in 1880? Linda… 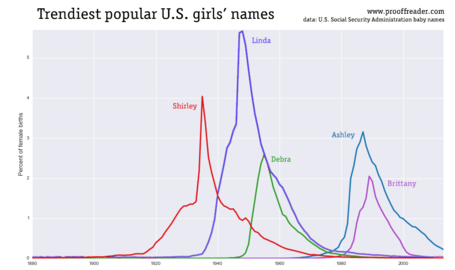 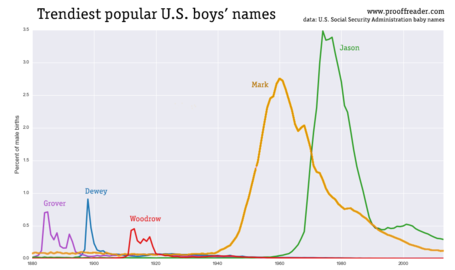 Taylor notes that, before the introduction of Social Security numbers in 1936, these numbers can be a little sketchy, so don't take the Dewey boom too seriously. If you're curious about trends in your own name, TIME's Chris Wilson has a great interactive here.