36 years ago, your employer could fire you for being pregnant

Share All sharing options for: 36 years ago, your employer could fire you for being pregnant

Happy birthday to the law that helps women have kids and still keep their jobs. The Pregnancy Discrimination Act was signed into law 36 years ago today.

How big of a problem is pregnancy discrimination?

Until recently, the EEOC combined national claims data with some state and local claims statistics into one metric. The number of those total claims that complaining parties won or that were found to have merit grew from 1997 through 2011, though national-level complaints ticked slightly downward in the last 2 years. 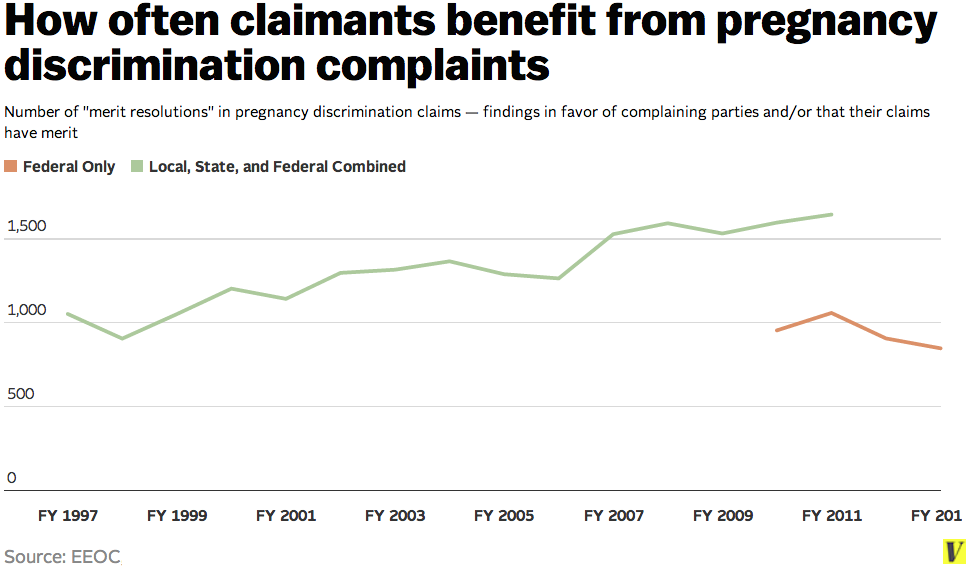 That's only a fraction of the number of charges filed each year — only around 24 percent of EEOC claims in 2013 found in favor of the claimants.

the eeoc is hoping that educating employers can help them stop discriminating so much against pregnant workers.

So what did the EEOC do?

The EEOC is hoping that educating employers can help them stop discriminating against pregnant workers. That's one reason why the EEOC this week released updated guidelines on what constitutes pregnancy discrimination — its first such update since 1983.

"We're still seeing lots of complaints at the EEOC on pregnancy discrimination — meritorious complaints, I might add," says Christine Nazer, a spokeswoman for the EEOC. "Because we believe the best way to address this problem is to educate employers, we released this guidance."

This updated guidance does not mean policy has changed — the main laws undergirding this guidance, the Pregnancy Discrimination Act of 1978 and the 2008 amendments to the American Disabilities Act, remain the same. But the new guidance spells out more thoroughly than the 1983 guidance what constitutes discrimination — complete with examples for many of the cases it brings up. And it's lengthy, coming in at around 25,000 words. In other words, this is not a change in the law — it's a new explanation of the EEOC's interpretation of the law. Courts can use this in making their decisions in discrimination cases, but they also might decide to disagree with the guidelines.

What's new in the guidance?

Perhaps the most substantial change is incorporating that 2008 disabilities law. Certain complications of pregnancy are now considered disabilities, and employers are now required to make "reasonable accommodations" for women with those sorts of conditions. That takes in all sorts of pregnancy-related conditions. Gestational diabetes could qualify as a disability, as could morning sickness that leads to dehydration, according to the guidelines.

gestational diabetes could qualify as a disability, as could morning sickness that leads to dehydration

A pregnant employee can also ask her employer for lighter duty. This is one question at issue in a current Supreme Court case, Young v. UPS, in which the parcel delivery service forced a pregnant woman into unpaid leave instead of giving her lighter duty at work. The Supreme Court is expected to start hearing this case on December 3.

The guidance also gets specific in other areas, spelling out for example that lactation is considered a medical condition. If an employer lets some employees rearrange their schedules for doctor visits, for example, that employer must let a woman rearrange her schedule to breastfeed.

Interestingly, the guidance specifically aims to protect men as well. For example, potential fathers are protected from discrimination along with potential mothers. It also spells out that while women get separate medical leave for having a baby, men and women should get equal "bonding" time with their new babies. So a firm might give a woman 10 weeks of medical leave for recovering from pregnancy but must give men and women the same 6 weeks of leave for spending time with their new kids.

That new education will likely send HR departments scurrying to make sure companies are meeting the EEOC's standards, says one expert.

"an employer who hasn't taken the trouble to learn compliance will have a lot of difficulty."

"The immediate practical impact is pretty great," says George Rutherglen, professor of employment law at the University of Virginia School of Law. "In practical impact, it's going to be the first thing that personnel officers, equal employment officers are going to look to when they get an inquiry about this kind of problem. ... An employer who hasn't taken the trouble to learn compliance will have a lot of difficulty."

Pregnancy discrimination law is confusing, hence the updated guidance. And employers who rely on their own attitudes about right and wrong, instead of the laws, can easily run afoul of them. Many employers have what Rutherglen calls "traditional attitudes" — the sort that might cause a boss to think his pregnant worker should be at home resting instead of doing lighter duty. The problem is that those "traditional attitudes" are discriminatory, malicious or not.

"They look at the condition of pregnant women, and they don't know whether they're supposed to go out of their way and make accommodations for the women, whether [the women] want them or not, or whether they're just supposed to ignore them and treat them like anybody else," he says. "That can get an employer into trouble."