The state's legislature amended a law in 1980, believing that the law inadvertently outlawed some forms of consensual sex between adults. That amendment created a legal loophole — one that sat unnoticed until 2003, when a District Court judge interpreted it to mean that paying for consensual sex was not a criminal offense in Rhode Island, not if it took place privately indoors. It took the state until 2009 to close the loophole.

The state's little legal accident was a bit embarrassing. But it did have a silver lining: it could serve as a "natural experiment," allowing researchers to estimate causal effects of decriminalizing sex work.

In a new paper from the National Bureau of Economic Research, economists Scott Cunningham and Manisha Shah look at the six years when residents knew prostitution in Rhode Island wasn't a crime. And they show evidence that Rhode Island's decriminalization caused a steep decline in both forcible rape offenses and the incidence of gonorrhea.

"Indoor" prostitution refers to sex work that takes place through massage parlors, escort agencies, and most of the online market, compared to outdoor street-based prostitution.

The authors found evidence that, after decriminaliztion, the size of the indoor sex market increased — as expected — and prices commensurately fell.

More surprising was the finding that forcible rape offenses fell by 31 percent in Rhode Island from 2004 to 2009, as decriminalized indoor sex work scaled up in the state. This translates to 824 fewer reported rapes. The majority of the reduction in rapes came from Providence, where the state's sex work is concentrated.

The chart below depicts reported rape offenses (per 100,000 people) in Rhode Island (the black line) compared to similar control states. The red line demarcates 2003, when decriminalization took place — and only Rhode Island's offenses drop off steeply after that. 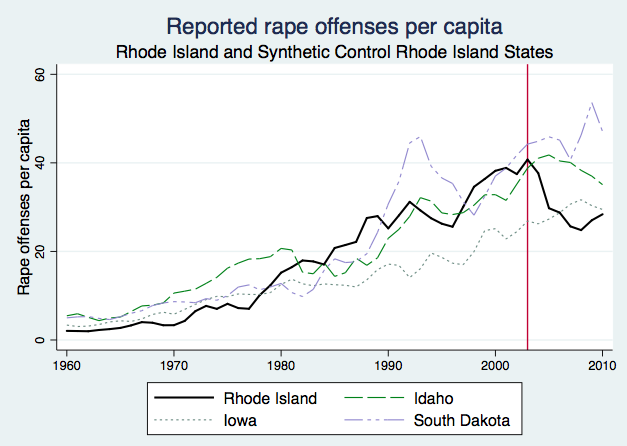 No other crimes — robbery, murder, assault, burglary, or motor vehicle theft — experienced a sharp decline after 2003 like rape did. This suggests that the decline was not associated with an increase in policing, because had that been the case, we would expect rates to fall for other types of criminal activity.

Using CDC data, the authors were able to determine that cases of female gonorrhea fell by 39 percent over the same time period. The sexually transmitted disease disproportionately affects prostitutes — 23% of women who engage in sex work report ever contracting gonorrhea, compared to 5% of the general female population.

The reduction in gonorrhea among men was less significant, which may be due in part to the science of STDs — a woman who has sex with an infected man faces a 60 to 80 percent risk of contracting gonorrhea while the female-to-male transmission rate is only about 20 percent.

Why did it happen?

The authors are honest in their paper: they're not quite sure.

"While we would like to say something conclusive about the mechanisms post-decriminalization which led to the observed decreases in rape offenses and gonorrhea incidence, we are careful to note that this discussion on pathways is merely suggestive," the authors write. "We are not claiming to have identified the causal channels which link the change in decriminalization to the behavioral outcomes of interest."

They do serve up some hypotheses, though.

Decriminalizing indoor prostitution could improve the bargaining position of female sex workers relative to clients, leading to lower rates of victimization. Research from the late 1990s found that indoor sex workers are victimized considerably less than outdoor street walkers. The legal quirk in Rhode Island only applied to indoor sex work, which could have resulted in some prostitutes abandoning outdoor business for its decriminalized — and safer — counterpart.

It's also possible that decriminalizing sex work allows firms to invest more money in security (locks, security cameras, security guards), increases cooperation with police, and decreases the potential for police corruption — all things that could lower the incidence of rape.

The authors offer a third, uncomfortable hypothesis: it's possible that violent males consider prostitution and rape as "substitutes". With prostitution legally acceptable and cheaper than when it was a criminal offense, would-be rapists might shift away from violence toward women, opting to purchase sex instead.

"While speculative, there is anecdotal evidence for this," the authors write. "In the 2010 documentary Happy Endings, which is about the efforts of Rhode Island to re-criminalize indoor sex work, there is a scene where a sex worker claims that she believes the men she services would have raped other women had they not come to see her."

Why is this research important?

almost everything we know is rooted in speculation, rather than good data.

According to a 2013 estimate, prostitution is an industry that generates over $14 billion annually in the United States. That's despite the fact that it's almost universally illegal across the country, save for some regulated brothels in some parts of Nevada. (Recall that Rhode Island recriminalized sex work in 2009.)

Despite the industry being huge and persistent, almost everything we know about decriminalizing prostitution is rooted in speculation, rather than good data.

Prior research has been plagued by problems, like relying on small sample sizes that aren't necessarily representative of the industry. According to the authors, most of the studies that exist examine street prostitution, even though 85 percent of all sex-work activity is considered part of the indoor market.

Sex work is a predictably fraught policy issue, because it gets entangled in matters of morality. But this study adds to a body of research that suggests criminalizing prostitution causes higher rates of victimization and unsafe practices.