Share All sharing options for: This chart shows every person killed in the Israel-Palestine conflict since 2000

Since 2005, 23 out of every 24 conflict deaths have been palestinian

It's no secret that the death tolls in the Israel-Palestine conflict are lopsided, with Palestinians far more likely to be killed than Israelis. But just how lopsided is driven home by looking at the month-to-month fatality statistics, which the Israeli human rights organization B'Tselem has been tracking since September 2000. Those numbers also tell some important stories about the conflict, how it's changed, and maybe where it's going.

Here are the monthly, conflict-related deaths of Israelis and Palestinians since September 2000: 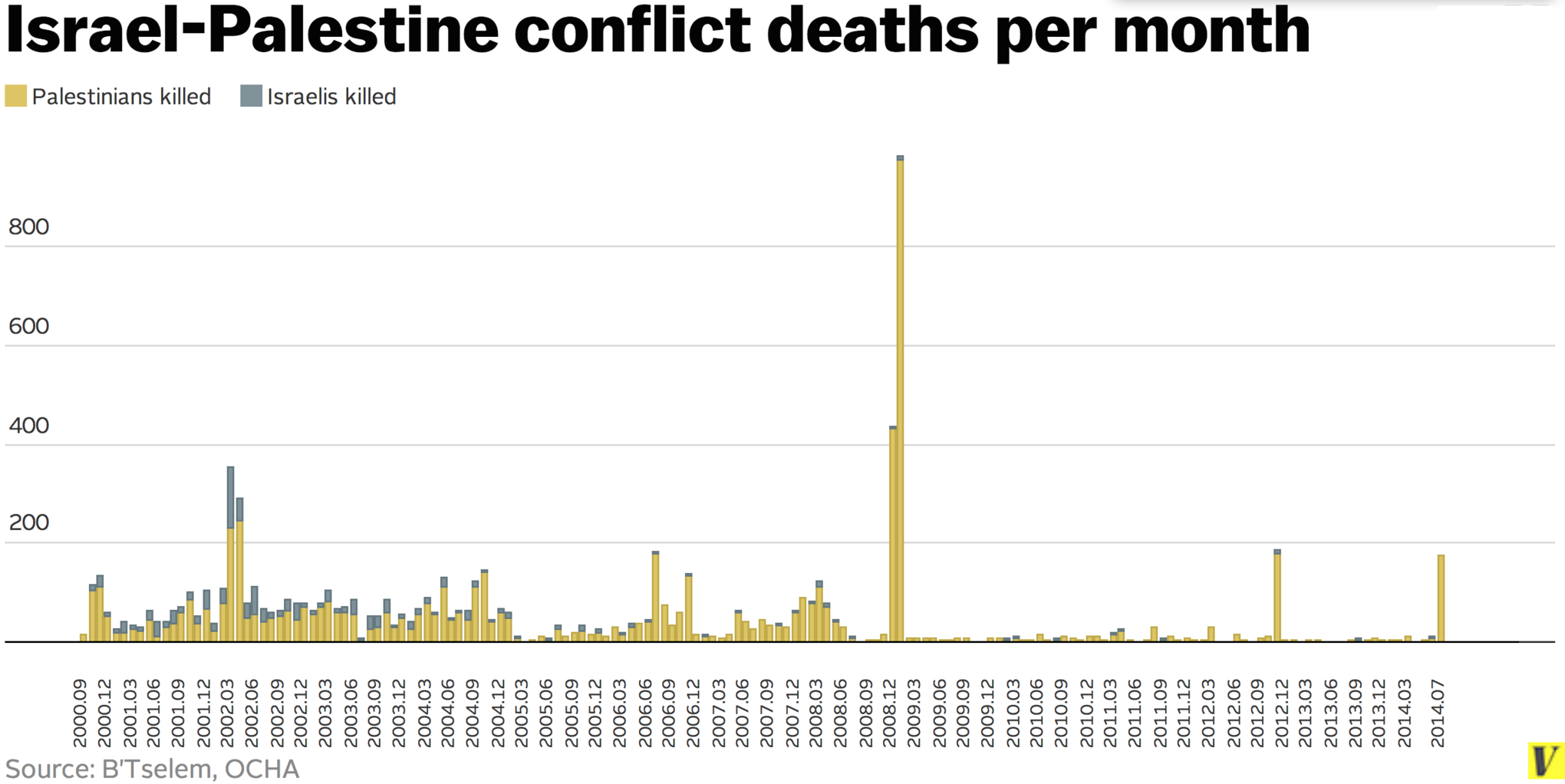 You'll notice right away that the overwhelming majority of the deaths are Palestinian, and have been for the almost 14 years since B'Tselem began tracking. Overall, the group has recorded 8,166 conflict-related deaths, of which 7,065 are Palestinian and 1,101 Israeli. That means 87 percent of deaths have been Palestinian and only 13 percent Israeli. Put another way, for every 15 people killed in the conflict, 13 are Palestinian and two are Israeli. (Statistics for the past two months are from United Nations Office for the Coordinator of Humanitarian Affairs.)

the disparity has widened over time

That number is even more staggering when you consider that there are about twice as many Israelis as there are Palestinians. This means, very roughly, that a Palestinian person has been 15 times more likely to be killed by the conflict than an Israeli person. Of course the conflict impacts Palestinians and Israelis far beyond just conflict deaths, but these statistics help show how utterly disproportionate the conflict has become in its toll.

Still, even though Israelis are killed at a far lower rate than are Palestinians, that does not make Israeli deaths any less real or traumatic. Here are just the Israelis killed in the conflict: 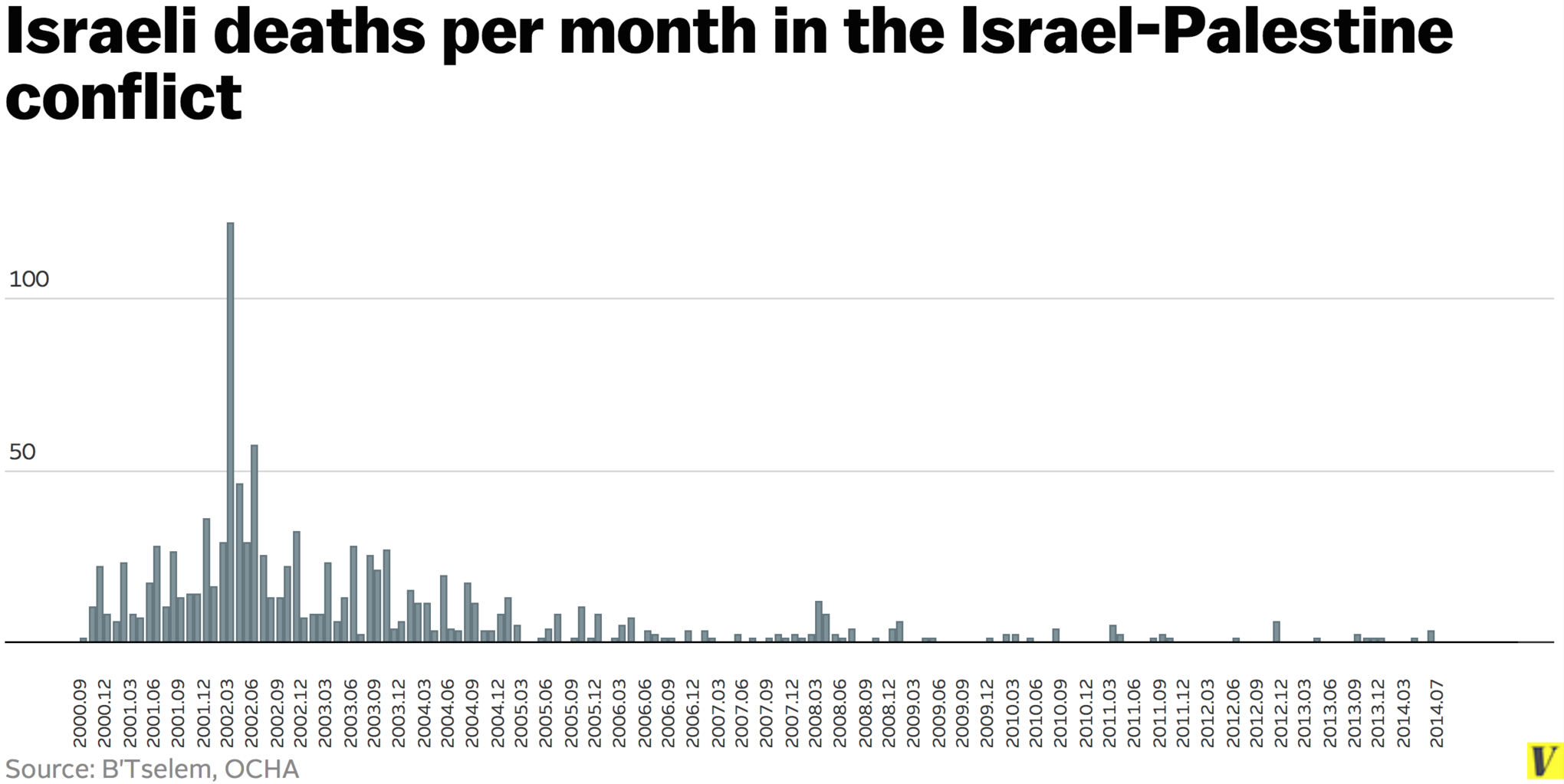 This chart shows just the 1,101 Israeli deaths in the conflict since September 2000. Of those, 744 were civilians and 357 security forces, meaning that an Israeli killed in the conflict is much more likely to be a civilian than uniformed — a legacy of the bus bombings and other terrorist attacks frequent during the early 2000s. But the most striking thing about this chart may be how dramatically the rate of Israeli deaths has declined since the early 2000s, with many months passing with no deaths at all. Here are a few bigger-picture lessons from these two charts. 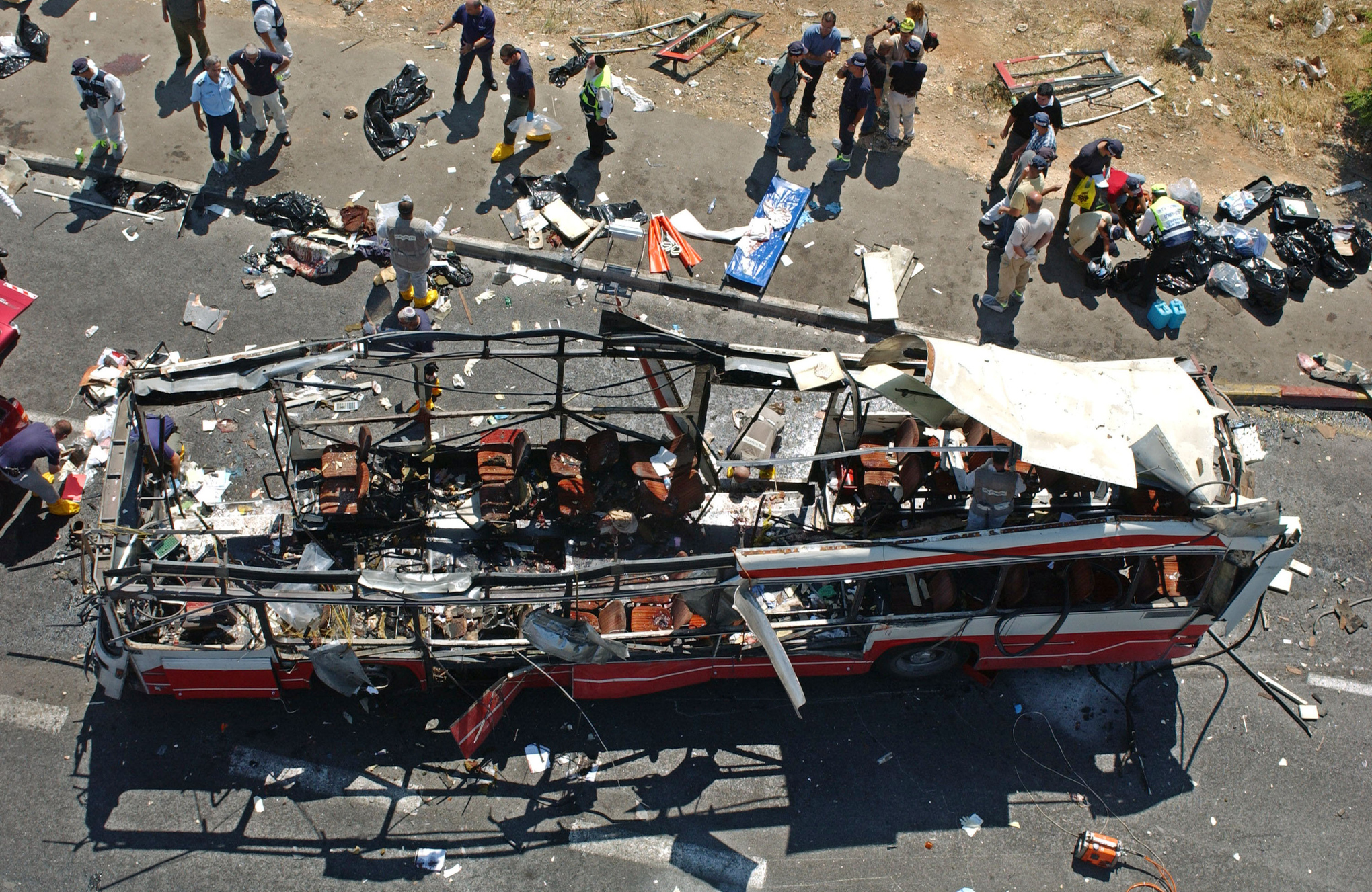 A 2002 bus bombing in Jerusalem that killed 18 (Getty Images)

B'Tselem began tracking these numbers when the Second Intifada, or second mass Palestinian uprising against the Israeli occupation, began in September 2000. And you can see that reflected in the numbers of deaths of Israelis as well as Palestinians.

The Second Intifada included riots, large-scale clashes, bus bombings and other acts of terrorism against Israelis, Israeli targeted killings against Palestinians, and perhaps most costly of all large-scale Israeli military assaults. This is when Israeli deaths hit their peak, with 283 killed in a five-month run from February through June of 2002. Even then, though, Palestinian deaths were much higher, with 659 killed over that same period. This is the closest that Israeli and Palestinian deaths have gotten to symmetrical, and still more than twice as many Palestinians were killed than Israelis.

Israeli deaths dropped in 2005 and have stayed low since 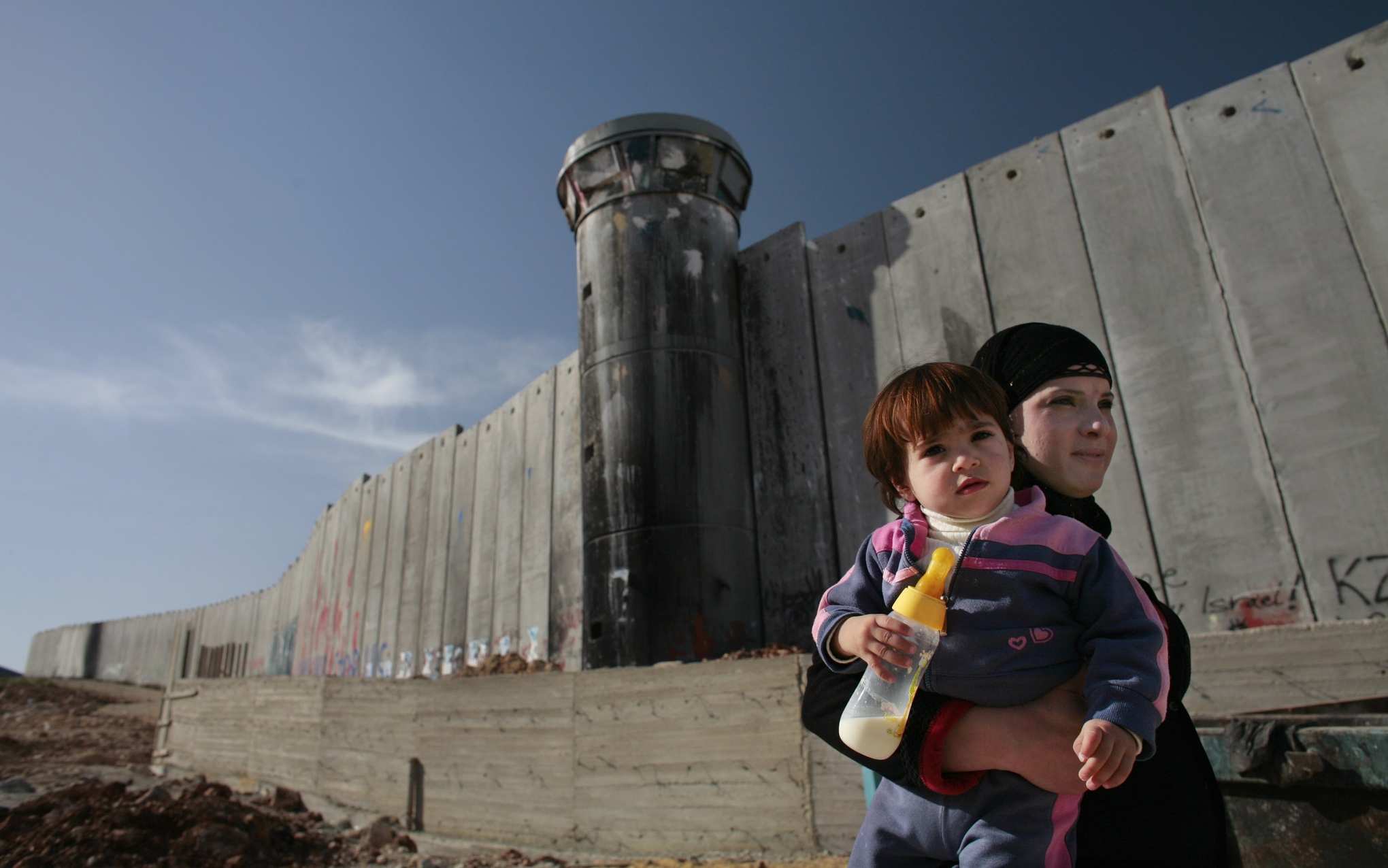 That is when Israel, fed up with the violence of the Second Intifada, responded in part by dramatically increasing the size and number of walls separating Israeli from Palestinian territory. Israel also withdrew its military and all settlers from Gaza, which is the smaller of the two Palestinian territories.

Both of these actions did a lot to remove Israelis from harm's way, which you can see reflected in the dramatic — and sustained — reduction in Israeli deaths. But they did not end the conflict, especially not for Palestinians, who continued to be killed in large numbers even after the Second Intifada felt like it had ended for most Israelis.

These two Israeli changes — installing more walls and withdrawing from Gaza — have also done their share to perpetuate the conflict. They drastically deepened the physical and metaphorical barriers between Israelis and Palestinians, further raising the pain of occupation for Palestinians and making it easier for Israelis to accept the conflict as status quo, and thus less likely to elect governments that will take risks for a long-term peace deal.

After the withdrawal from Gaza, the terrorist group Hamas took power there and has held it since, using the territory as a base for regular rocket attacks against Israel. While those rocket attacks do not in themselves cause nearly as many deaths as the violence of the Second Intifada, they are part of the conflict between Israel and Gaza-based militant Palestinian groups that occasionally flares up to cause massive numbers of Palestinian deaths, as is happening this week. 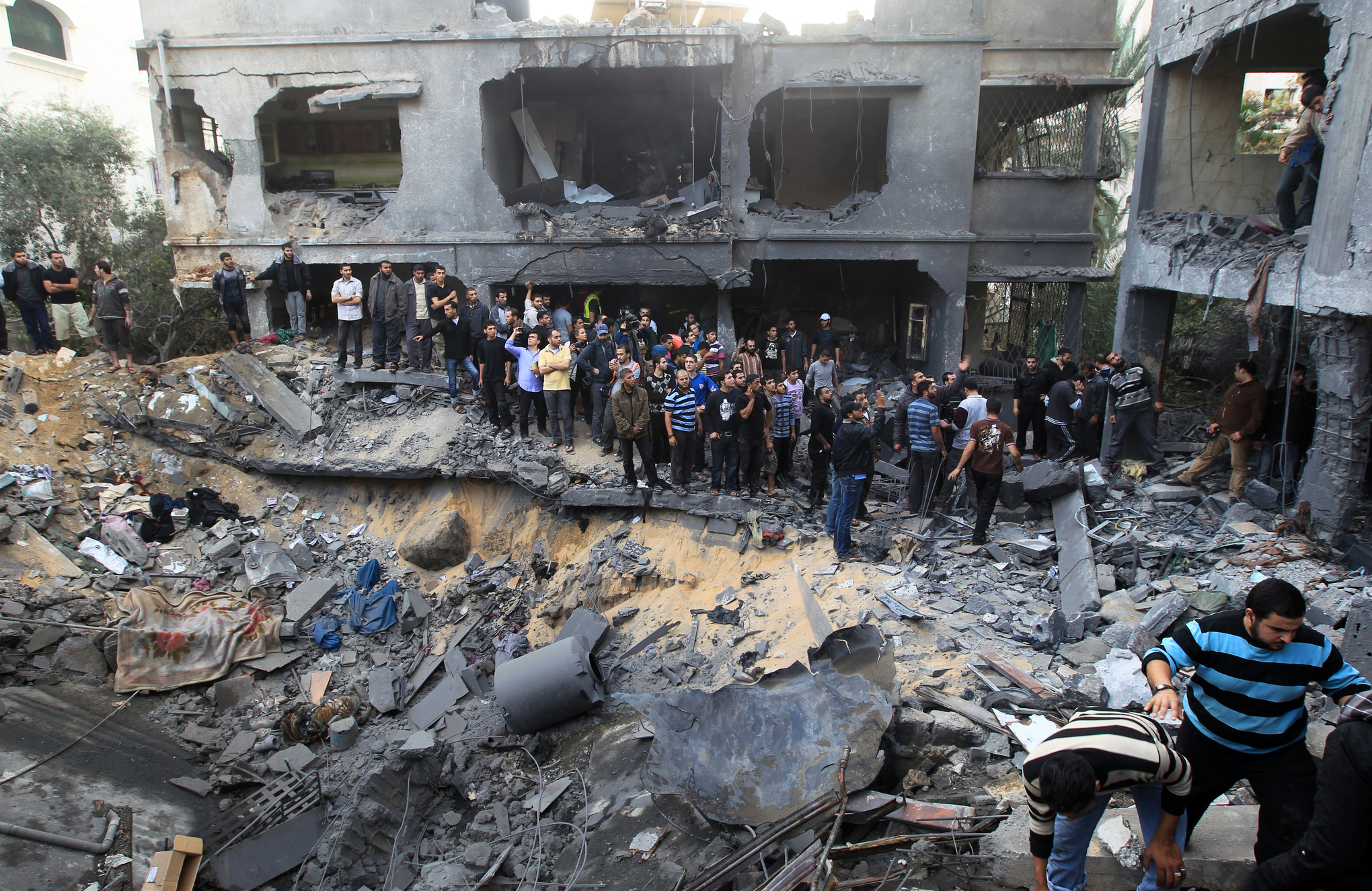 Since 2005, the conflict has settled into a new pattern: fewer Palestinian deaths during "calm" months with occasional spikes into catastrophic numbers of Palestinians killed.

These spikes, of which the chart shows four since 2005, are all times when Israeli forces attacked Gaza, where Israel was targeting Hamas and other militant groups but also ended up killing large numbers of Palestinians civilians. In mid-2006, form June through November, Israeli forces invaded Gaza as part of Operation Summer Rains, which was sparked by Palestinian rocket fire into Israel and by the kidnapping of Israeli soldier Gilad Shalit, who was released five years later.

this approach is sometimes called 'cutting the grass'; it is never-ending by design

In late 2008 and early 2009, Israel again invaded Gaza as part of Operation Cast Lead, which caused only 13 Israeli deaths but ended with well over 1,000 Palestinians killed and devastated the Gaza Strip. Those two months were by far the deadliest for Palestinians since B'Tselem began tracking in 2000.

Israel launched extended bombing campaigns in Gaza in late 2012 and again this month, both of which have killed dozens of Palestinians. While Israeli strikes are targeting Hamas and other militant groups that are firing rockets into Israel, a local UN office estimated on Friday that 77 percent of people killed in Gaza up to that point were civilians, including 30 children. A separate UN agency estimated on Sunday that 70 percent of the killed were civilians, including 27 children.

The conflict is settling into a terrible cycle 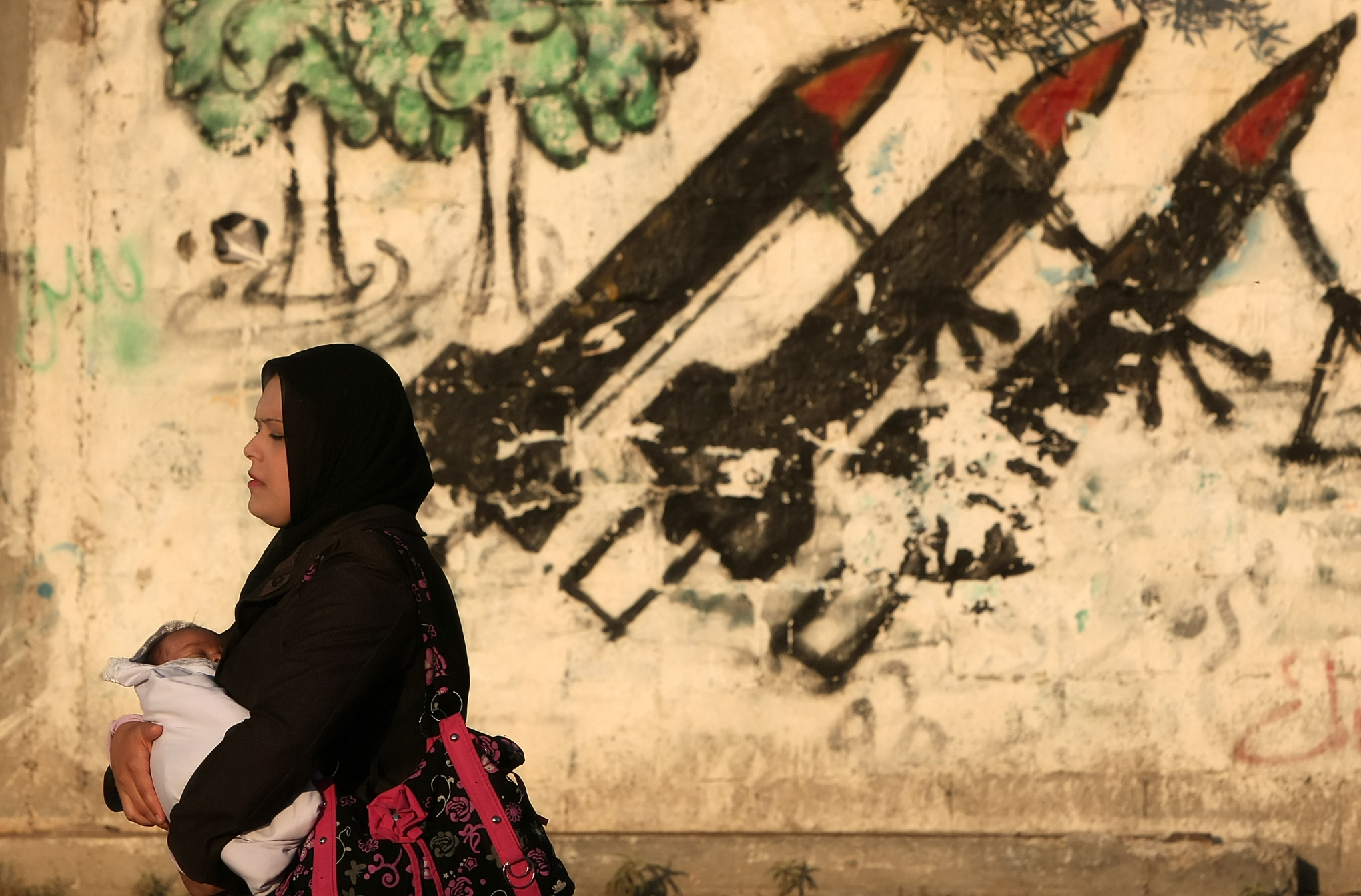 You can see the pattern of the last several years clearly on the top chart: the conflict remains at a relatively low level until, every couple of years, it flares up with heavy Israeli strikes on Gaza that also cost a large number of Palestinian lives. This status quo, on net, clearly causes a large number of Palestinian lives. But it kills very few Israelis, which is a big part of why Israeli voters and leaders have appeared willing to accept it.

This Israeli strategy is sometimes described as "cutting the grass." In this thinking, Israel never really solves the conflict or even tries; it tolerates a level of violence from Gaza-based militant groups, but every few years bombs and maybe invades Gaza to weaken militants there and destroy their weapons – to cut the grass. It treats the Israel-Palestine conflict, at least as it pertains to Gaza, as something to be managed rather than solved.

It is important to stress that this strategy is not one that ever produces peace or that is designed to lead to a solution. It accepts a low level of Israeli deaths from rocket fire, and occasionally dozens or hundreds of Palestinian deaths from air strikes, as status quo.

Correction: This post initially reported erroneous fatality statistics. I had misread B'Tselem's data tables in a way that significantly under-counted Israeli deaths, as well as some Palestinian deaths. The charts and statistics in this post have been corrected to reflect the accurate count. I regret the error and thank Philip Klein of the Washington Examiner for pointing it out to me.