Jeremiah Heaton, of Abingdon, VA, believes he is the King of North Sudan, a totally made-up country. On June 16th, the dutiful father found an unoccupied patch of land between Egypt and Sudan and literally planted a flag there, all because his daughter wanted to be his princess. Now he claims power over the Kingdom of North Sudan, and wants international recognition of his dominion.

This is all way more legal than you think. Real countries have tried the exact same thing — most notably during the European colonization of the Americas and Africa. Though Heaton likely won't be able to build his own country along colonial lines, it's a deeply creepy precedent.

The land Heaton claims is called Bir Tawil. It sits just to the south of Egypt and just to the north of Sudan, as you can see on the map made by Wikimedia Commons user NordNordWest to the right. There are no permanent human settlements there, and neither Egypt nor Sudan claims the land. 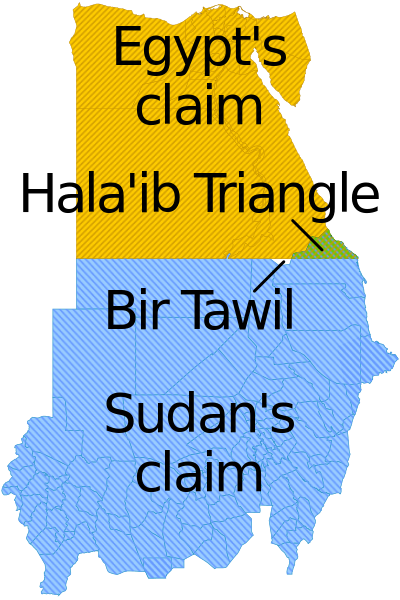 The reasons why date back to — surprise! — colonial rule. When the British controlled land in the region, they set two borders: one, in 1899, that would put Bir Tawil in Sudan; another, in 1902, that puts Bir Tawil in Egypt. The problem is, given each border's placement, whichever country gets Bir Tawil doesn't get the much more valuable Halai'ib Triangle. So Egypt claims the 1899 borders are the correct ones, while Sudan prefers the 1902 borders. That means, by implication, neither country claims Bir Tawil as its own. It's literally unclaimed territory — except by Heaton.

International law has a name for unclaimed territory: terra nullius. And according to Randall Lesaffer, a professor of law at the Catholic University of Leuven, the International Court of Justice (ICJ) believes that countries can just take terra nullius if they want it.

This may sound ridiculous, but the idea that any country could simply take unpopulated land has been a part of international law for centuries. Initially, it was used for pretty nefarious purposes. Lesaffer dates its "strong foothold in the law of nations" to the 16th and 17th centuries. European nations needed a legal principle to determine who could claim what American land; they basically settled on the idea that whichever European power got to the land first got to keep it. Vast swaths of Americas were labelled terra nullius. Creepily enough, there was heated debate over whether land that natives had settled also counted as unoccupied by humans — a question that remained unresolved by European legal authorities.

Colonial powers used terra nullius similarly in Africa and Australia in the 19th century. "International lawyers of the 19th century, who only recognized states in their Western form as subjects of international law, held that non-state entities could not hold sovereignty," Lesaffer writes. That meant that African nations weren't real nations, making their land terra nullius — free, in legal terms, for Western occupation.

Modern governments have used the terra nullius concept in all sorts of different ways. For instance, Japan and China's dangerous dispute over the Senkaku/Diaoyu Islands depends on terra nullius. Japan claims the islands were unoccupied in 1895 when it seized them; China claims they were part of China. Two other modern border fights, over small islands between Nicaragua/Honduras and Indonesia/Malaysia, centered on whether the islands were currently terra nullius. In the first case, the ICJ ruled they were not; in the second, it ruled they were. The latter, which gave the disputed islands to Malaysia, was the only ICJ recognition of terra nullius status from 2000 to 2010.

Weirdly, Morocco tried to use terra nullius to retrospectively justify Spanish colonialism in 1975

There are plenty more examples. In 1933, Norway claimed that the eastern part of Greenland was a terra nullius, so Denmark, which claimed the whole island, had to let Norway settle part of it. Weirdly, Morocco tried to use terra nullius to retrospectively justify Spanish colonialism in 1975. Morocco wanted Western Sahara, which itself wanted to be independent. So Morocco claimed that Western Sahara was terra nullius when Spain took it and that Spain then owed Morocco the land (for complicated legal reasons) when it withdrew. Both Norway, in an early court of international law, and Morocco, at the ICJ, lost.

All of this goes to show that a state's ability to legally seize terra nullius remains a legitimate part of international law. So Heaton is quite right; the Kingdom of North Sudan is perfectly within its rights to seize Bir Tawil so long as Egypt and Sudan don't claim it.

Or it would be, if North Sudan were an actual country. Heaton doesn't live in Bir Tawil, so he can't claim to be an indigenous population. And there's no country in the world that recognizes the Kingdom as a sovereign state. That means Heaton probably doesn't have standing to claim Bir Tawil in a way that Algeria, the United States, or any other widely recognized country could. Absent recognition, North Sudan will not have actual political control over Bir Tawil, according to Sheila Carapico, a political scientist at the University of Richmond.

So while it's unlikely Heaton will ever be able to give his daughter a real kingdom, the legal theory behind his land claim is perfectly, bizarrely legal.