Post-Hobby Lobby, there's been a rapid turnaround in public opinion of the Supreme Court

Share All sharing options for: Post-Hobby Lobby, there's been a rapid turnaround in public opinion of the Supreme Court

The Supreme Court ended its term in June with a series of controversial decisions, most notably in the  Hobby Lobby case. Now, a new Gallup poll finds that public approval of the institution is mixed — 47 percent of Americans approve of the job the court's doing, while 46 percent disapprove, which is a similar result to recent years.

But embedded within the poll's findings is a fascinating example of how quickly political opinion can turn around. Because last year, it was Democrats who overwhelmingly approved of the Supreme Court, and Republicans strongly disapproved of it. And now, in a post-Hobby Lobby world, the parties have switched places: 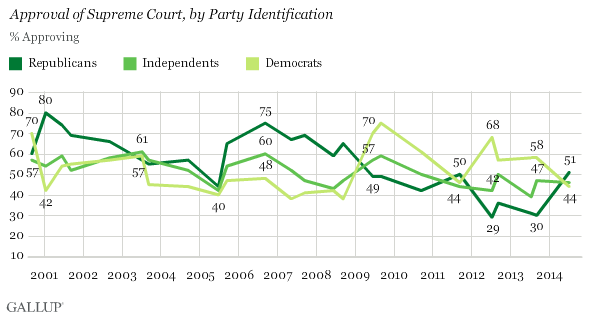 It might seem natural that partisans become more approving of the court when it makes a decision they like. And that's certainly true to an extent — the chart shows a massive partisan swing in June 2012, just after the Supreme Court upheld most of Obamacare, with Republicans turning sharply against the court and Democrats overwhelmingly supporting it.

Yet the overall trend seems to be that party-identifiers tend to say they approve of the court when their own party controls the presidency. Note on the chart that Democrats were overwhelmingly favorable of the court at the end of the Clinton administration. After the Bush v. Gore ruling put Bush in office, Republicans became far more favorable, as they remained through nearly all of the Bush years. And then when Obama took office, Democrats suddenly became much more approving — even though conservatives maintained a 5-4 majority on the court.

This is likely because most Americans don't pay too much attention to the latest Supreme Court news. Indeed, a 2012 survey found that only 34 percent of Americans can correctly name even one Supreme Court justice. It takes a pretty momentous decision to get the public's attention — and, apparently, Hobby Lobby has.