68% of Americans think elections are rigged

Share All sharing options for: 68% of Americans think elections are rigged

A new Rasmussen poll finds that 68 percent of Americans think elections are rigged in favor of incumbents. And they're basically right.

The term "rigged" might go a tad far. The problem here isn't fraud. In elections, like in so much else, the scandal is what's legal.

In elections, like in so much else, the scandal is what's legal.

Incumbents get a voice in gerrymandering — meaning that the politicians, in an inversion of the normal rules of democracy, get to choose their voters. They begin raising money starting the day they're elected so by the time their reelection rolls around their challenger is at a severe financial disadvantage. They have name recognition and ground games that few challengers can match, and they can do favors for influential people and organizations throughout their district. And because so much of Congress works on seniority, they can argue, plausibly, that they'll be more effective for their constituents than their challenger.

The result is that very few congressional elections are seriously competitive. Reelection rates for incumbents tend to hover around 90 percent — and they occasionally get perilously close to 100 percent. In 1998, for instance, the House reelection rate was a stunning 98 percent. Those numbers are slightly inflated because incumbents who think they'll lose don't always run for reelection. But they're basically right — and that's been true even in recent years, when tea party primaries have gotten so much press.

The powers of incumbency are so strong that overall congressional approval ratings barely affect congressional reelection rates as this Washington Post graph shows: 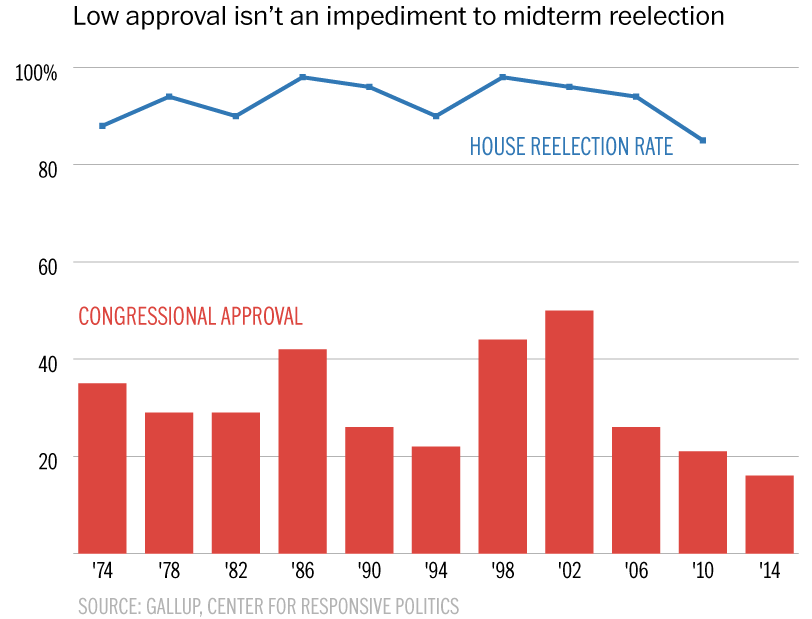 People hate Congress, but for all kinds of reasons, they tend to like their particular member of Congress, or at least they end up preferring him or her to the alternative.

So yes, the game is rigged in favor of the incumbents. But ultimately voters are the ones who have rigged it. If we think gerrymandering gives incumbents an unfair advantage we could do what Canada did and get rid of partisan gerrymandering entirely (a very worthwhile Canadian initiative). If the problem is money than we could simply refuse to vote in a single member of Congress who won't pass the kind of campaign-finance reform Larry Lessig is pushing.

Politics often gets explained in the passive voice. But passivity is a choice. And a lot of what's wrong in American politics could be swiftly fixed by an active electorate.